Mountains of Madness Board Game Review 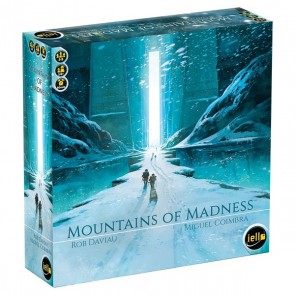 Taking its name from the objectively best Lovecraft story, Mountains of Madness is a cooperative game that puts the players on an ascent to the craggy peak of an Antarctic summit. Along the way, they'll dig into secret knowledge best left forgotten and suffer the ill effects of madness. While this may sound like the latest in a long stream of samey Mythos-laden titles, this one is different.

You see, you don't merely tally up your madness with points, or get cards that provide simple modifiers. No, when you go mad, you actually have to do things during the game. The madness impacts how you, as a player, interact with the system. And those impacts run the gamut from mostly benign, to unbelievably confusing.

The main thrust of the game is pretty simple. Each round, the group moves to an adjacent spot on the board. Once there, you flip over the tile and a sand timer. The tile will have a list on it like, "7 Guns and 9-12 Supplies." Each player has cards in their hand, generally from 1-5 in four suits. The group then coordinates and tries to put the right number of cards into the pot so that they meet the tile's goal. They can say or do anything they want short of showing their hand of cards. But once one person plays into the pot, all conversation stops. So you have to get it figured out beforehand.

If you succeed, you get a reward. If you fail, you get some bad thing. That could be taking wounds (worthless cards that clog the deck), gaining madness, or losing leadership. If you succeed, your reward is often eldritch knowledge that increases your madness, but is worth points at the end. And, throughout the game, you can expend leadership tokens to make certain things easier - but they eventually run out.

That mechanical aspect of the game is actually pretty banal. All you're really doing is discussing what cards you have, and who will put what into the pot. Then you do it. That's it. If not for the madness, the game - such as it is - would be a total flop and not worth your time. But the madness works well.

Madness, you see, comes in three tiers. If you gain madness, you first get a tier 1. If you gain more, you substitute a tier 2. And if you gain a third, a tier 3. While you are prohibited from discussing them at any time, they only take effect after flipping the tile. Specifically, they make you act in a way that makes it harder to discuss and get the right combination of cards into the pot.

Tier 1 madness cards are things that are mildly inconvenient, but don't really get in the way of accomplishing your goals. For example, they might require you to stand during the discussion or raise your hand before speaking. They're almost funny rather than a true hindrance.

Things step up with Tier 2. Now you're looking at cards that are actively interfering with your ability to coordinate. You might get one that prevents you from actually playing the cards down, forcing another player to pull them out of your hand. Or, perhaps one that allows you to speak only asking questions.

And Tier 3 really causes problems. You might get a card that requires you to say "he" when you mean "you." When trying to coordinate who will throw in which card, that can be absolutely devastating. Alternatively, you might not be allowed to say numbers at all, but only "more" or "less."

The madness is what makes the game fun. They tend not to be silly just for the sake of silliness. This isn't Quelf. But they do liven things up and cause unpredictable challenges.

After a new madness has been drawn, everyone takes a big breath before flipping the tile. Suddenly, someone is speaking in math problems rather than just telling you what numbers they can contribute. And you have to recognize the issue and get it figured out before the timer runs. Overall, it strikes a fine balance - not too zany as to be off-putting, but not too timid that it becomes dull or meaningless.

Ultimately, the goal of the game is to get off the mountain with as many relics, and as few wounds, as possible. This part of the game, though, is much less interesting. Choices tend to be very straightforward. And, there is a modicum of press-your-luck as the players have to decide how long to dither at the bottom of the mountain collecting relics before proceeding toward the exit and victory. In fact, the game is not all that difficult to "win." The challenge is in getting a high score. Sadly, getting eight points is just not a satisfying end to a Mythos game.

SuperflyPete replied the topic: #276206 26 Jun 2018 00:36
That game sounds both boring and terrible except for the speaking in tongues. Like Battlestar’s card contributing and then boring.

WadeMonnig replied the topic: #276207 26 Jun 2018 00:43
I would be afraid that after you have seen a madness card, it becomes a known quality. "Oh, he has the raise your hand card" and the fun would dissipate once you "know" all the madness cards.

Actually... no. When I think Cthulhu, the last thing that comes to mind is anything wacky or goofy. That said, I liked the description you gave of the game, but I had the same reaction that Wade did, in that the cards would become a known quantity too easily and the game would be just a routine of how to play around it, rather than play with it. I'm always extremely leery of Lovecraft-themed creations because I think there's such a wide divergence of opinion on the atmosphere of many of his stories. I would have expected this game to have more of a "ticking clock" mechanic than a puzzle to solve (which was one of my initial criticisms of Mansions of Madness. The 2nd Ed of that game seems ridiculously popular on BGG. /tangent)
Read More...