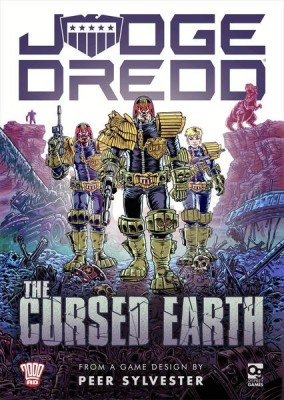 I'm looking at a box, and one of my earliest memories is looking back at me. An implacable figure in a blue-black jumpsuit, eyes obscured behind a helmet and joints protected by padding. On his chest is a gold badge emblazoned with a single word: Dredd. I drew this character in felt tip, from memory, before I was even able to read, without knowing who he was. That's how deep Judge Dredd had embedded in the psyche of '70s Britain.

He's slept a long time. Too long for us gamers. Now here he is, stony as ever, ready to deliver justice to the apocalyptic wasteland of the Cursed Earth once again.

I break the seal, note with pleasure the "Justice Department Field Ration" box included to store the counters and flip through the rules. It's the same basic engine as The Lost Expedition. You lay down series' of cards, looking for sequences that minimise or discard negative effects. But you also have to prioritise icons that move you across the irradiated desert. Knowing the previous game, this one slides down like a boot knife into its sheath. So I jump in.

There are important changes though. Instead of bullet icons to drain that resource, there's a "violence" option where you can either lose a bullet or two health. There's also a psi icon which adds a card to the row, but Judge Anderson can take damage to give you a selection instead of a blind draw. Now death can come not only from losing health but gaining rads. Clearly, it's trying to work more meaningful choice into The Lost Expedition's gentlemanly chaos.

Each card of the Cursed Earth's hellscape we pass through has an effect, and we're chasing after Mean Angel and some other perps. The first, Brunner's Warplands, adds a rad to a character. Not the best start.

It gets worse. We're assaulted by Doom Jacks and further irradiated in the Neon Gulch. I struggle to do much with the hands I'm drawing. For all the extra choice in the mechanics, it feels like there's less on the cards themselves, which is frustrating. The Psi option, in particular, feels a bind. Health is so precious and cards so nasty in the wasteland that it feels wiser to draw blind than waste one for a mere choice.

Under my guidance, these famous judges, who've triumphed over impossible odds many tiles, fail miserably. Judge Giant died first, negotiating with looters. Then Anderson in a shootout with a mutant over a bridge toll. Dredd staggered on through another whole march before getting crushed in a dinosaur stampede. He was still miles behind the perps.

Stung by my ineptitude, I decide to take a straw poll of the cards in both decks. It's hardly a full picture but a quick count suggests my first impressions were correct. There are thirteen cards that let you skip others in this game, a key way to avoid negative effects, versus sixteen in The Lost Expedition. There's only one less card that moves your team. But when racing against perps and dangerous environments, the shortfall feels bigger.

Seems like we're supposed to imagine a dinosaur-infested, mutant-populated nuclear desert is somehow a harder place to cross than the mere Amazon jungle.

A few days later, sad news. Legendary Dredd artist Ron Smith passes away, aged 94. Judge Dredd: The Cursed Earth, like its parent game, plays like a comic strip. It's so natural to imagine each card as a panel that you barely notice the story that's building until it's over. So breaking the game out again seems like a fitting tribute, the cards popping with ink from his successors.

We go co-op this time and get the most monstrous card in the deck, legendary Tyrannosaur Satanus, in the very first hand. We're hamstrung however we try to get around it. In the morning trek, cards are encountered in number order and, in a fit of masochism, the designers made Satanus number one. In the afternoon we encounter them in play order. but I'm playing before the owner of this awful beast and, with fewer skip cards in the deck, I have no skip cards in my hand.

There's nothing to do but face it down so we're starved of resources after our very first turn.

Next game starts better: our location gives us some extra rations which then get spoiled. We get moving thanks to the psychic Bruja. But then, cynically, we plan to throw Judge giant into a spider's lair for extra movement. Knowing he's marked for sacrifice, he becomes our damage and rad sink for the trek, keeping the others healthy.

It's nasty, but it works. The Cursed Earth is a nasty place and I'm learning that kind of ruthless logic is necessary to survive.

Slowly, though, the desert takes its grim toll. Despite looting an abandoned rad-war bunker and an old 'droid there are too many terrors to cope with. Bounty Hunters and a Rad Storm weakens Anderson, then she falls off a cliff the two were traversing to save time.

Still, the location cards are counting down and we're ahead of the perps, just. But Dredd's left alone to fight off raiders, looters, and dinosaurs. Exposure to the radiation carried by mutant cows finishes him off, a sad end for a great antihero.

One card away, as it turns out, from a win. So I guess it is possible if you're lucky.

As well as solo and co-operative, you can also play Judge Dredd: The Cursed Earth competitively. That way there is, at least, guaranteed to be a winner, so we do it. The judges vs perps theme fits the mechanics, where we build two paths and the current player chooses one, a bit better than the parent game. But we'd reckoned without the two movement icons - one for your team, one for the enemy.

Suddenly, this isn't the trivial trickery of trying to out-psych your opponent into picking the wrong path. It's a willful psi-battle that would tax Judge Anderson. I keep trying to build paths that will let my opponent move but will prove too punishing for her to play. She keeps refusing the bait so I streak ahead but I'm in a desperate state, characters irradiated, dying and starving. With one Judge alive I crawl into the home stretch but it's too long. In this game, the goal card gets shuffled into the last three and it proves two cards out of reach, handing a win to the healthy, well-fed perps.

The next time we want to play, I go to the shelf and find Judge Dredd: The Cursed Earth next to The Lost Expedition. My finger hesitates over which to pull down. It's drawn to the older game with its more flexible cards, easier ride and extra options from an expansion. But out of the corner of my eye, I can see old stony-face regarding me with that implacable glare, just like he did in my childhood. So I change tack and down he comes: he is the law, after all.

Writing reviews in this narrative style is an experiment, and I'd welcome feedback. It's also quite time-consuming, so if you felt able to follow me on Twitter or Facebook or even be so gracious as to back my Patreon, I'd be hugely thankful.

January 21, 2019
Rating
4.0
Judge Dredd: The Cursed Earth
Delivers a thrilling comic-book narrative across a flexible range of play styles: solo and co-operative are tough and a little rigid but the tweaks to the competitive version easily compensate.
MT
Matt Thrower #1 Reviewer 286 reviews

Jazzbeaux replied the topic: #290403 22 Jan 2019 03:58
Well there it is.
Both sound good, not sure which wins out at the moment - more family orientated Lost Expedition or Dredd based version...

Jazzbeaux wrote: Well there it is.
Both sound good, not sure which wins out at the moment - more family orientated Lost Expedition or Dredd based version...

I'd pick on whichever theme appeals most.

I would say I enjoyed TLE marginally more as a co-op/solo game than Dredd. Dredd seems extremely difficult to beat and I'm not sure the new mechanics add much to the experience. Plus TLE has an expansion for more variety if you want it.

That said, Dredd has a better theme, naturally and as a competitive game, it's much better.

Jazzbeaux wrote: What player numbers would you recommend? We have 3 for family games, while the gamer group rarely is below 5 - would Dredd be good with 5?

Player count tops at 4 max. I've only played it co-op with 2 and 3 and it works well at both numbers. The competitive game is 2 only.

Jazzbeaux replied the topic: #290409 22 Jan 2019 06:50
Oh, that's a difference then. I checked Lost Expedition which goes to 5 and assumed Dredd did the same. Lower player numbers would probably be better which ever.

mezike replied the topic: #290423 22 Jan 2019 11:01
You can fudge TLE to more than five players, we tried it and just added a rule that whoever doesn't play a card in the day must be the first to play a card in the evening so that we didn't break the basic structure of the game whilst keeping everyone involved. I don't know if this would work with Dredd or not. You could probably just play with more people all putting cards in and it would be the same difference, it's a co-op after all so all that will happen is the game will be slightly easier or harder depending on your card draws. When we were playing it I felt that the competitive mode was better than the co-op in any case.

I eventually gave TLE away to a friend after it went out of rotation and with the expectation of replacing it with Dredd but I'm not so sure now. I'm usually a sucker for 2000AD related stuff but it doesn't sound unique enough to be more than a novelty after we reached a point of feeling all played out on TLE.