Shards of Infinity: Relics of the Future Expansion Review 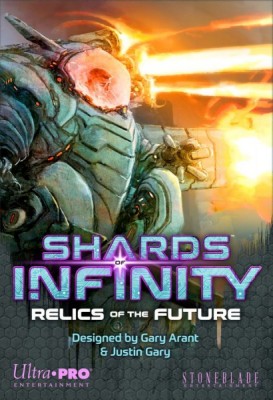 Game Name
Shards of Infinity: Relics of the Future
Publisher
Stone Blade Entertainment
Designer
There Will Be Games

I scoffed when Shards of Infinity came out last year. Despite my love for Ascension, the idea of it becoming a PvP game seemed silly. Besides, there were already other games that did that and I wasn’t a fan. However, soon after playing Shards of Infinity, my reaction of “Why?” immediate changed to “More!”. Everything in the system worked. You have the standard attack values that you aim at an opponent of your choice, but the mastery system is what made the game sing. The decisions as to how your deck became more nuanced than simply get more money, buy more attack. I couldn’t wait for more content to come out.

Relics of the Future is a small box expansion and I do mean small. It includes a total of 32 new cards. Twenty-four of those cards are ones that get shuffled into the deck. Some of these cards offer new abilities that aren’t drastically different from what was in the base game. The Wraethe cards still reward you for having other Wraethe cards in your discard pile; Homodeus allies want you to control Campions; and Undergrowth cards gain you health when paired with other Undergrowth cards. The Order cards offer more novelty as they ask you to have more mastery than other players for effects to trigger. Overall, none of these new abilities are earthshattering and would have been welcomed in the base game.

Other cards in the set of 24 deal with the main attraction of Relics of the Future: unique character-based abilities. Remember those oversized character boards? Now it matters which one you pick as some of the center deck cards will provide an extra ability depending on who you chose. There are only a few for each faction though, so you don’t really need to worry about building your whole deck or even strategy around the character you chose. This is a secondary consideration, especially considering each character also has two Relics they begin the game with.

When a player hits 10 mastery, you may choose one of your character’s two Relics and shuffle it into your deck. Since this typically happens mid-game, you can select the one that best fits with the direction your deck has been headed. Each Relic is still flavored in the style of its faction without pigeonholing your strategy. In fact, there’s even an official variant, “Mystery Relics,” in which you can deal out relics randomly. Relics give you something to aim for in the game and feel like a real accomplishment when you gain them. At the same time, they don’t drastically change the ultimate feel (or fun) of Shards of Infinity. Like the aforementioned center deck cards, you can’t help but wonder why they weren’t included in the base game to begin with. (On the plus side, I can now store everything in the smaller box as I forewent using the fiddly character boards a while ago.)

For a small (and cheap) expansion, you can’t ask for much more out of Relics of the Future. If anything, I can only fault it for whetting my appetite for even more content. Stoneblade has teased at the second expansion currently in the works and the app implementation is currently in beta. I’m excited.