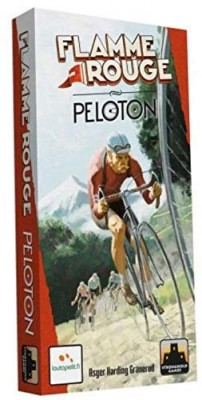 The Flamme Rouge: Peloton expansion adds pink and white as new player colors and expands the player count to six players (or twelve players if you choose to only play as one of the two racers per team).

You're still here? This review is....Oh, wait, I already did this joke for the Champions of Midgard: The Dark Mountains expansion review. Well, this is awkward. Let's start over.

The “peloton” is the main group of riders or “pack” in a bicycle race. From the French for “platoon”, the peloton are not your comrades-in-arms; this is the trenches. A battle for inches, not just for position, but for slip-streaming, as well. It's one of the more ironic names for this bicycle race expansion, since some of the core improvements are about breaking from the pack.

One of the key additions is the implementation of the Breakaway variant. Starting any game of Flamme Rouge at the back of the pack has always left a bitter taste in my mouth. Even while justifying it in my mind as a balancing mechanism when playing with new players, no one wants to start at a perceived (or real) disadvantage. The Breakaway variant adds a bidding round that allows you to break out ahead of the pack at the start of the race. It is a "push your luck" mechanic, since you will be bidding using two movement cards that you would normally be powering your racers with and replacing them with exhaustion cards if you win the bid. It's an expensive proposition, one benefiting those farther back in the pack and, as with most of Flamme Rouge, it's a subtle advantage. The fact that the usefulness of winning the Breakaway variant is,and will be, constantly debated makes me feel that it is perfectly balanced.

“Subtle” should be the keyword for all of the additions found in Peloton. Nothing here shakes the foundation of the base game and rightfully so, Flamme Rouge is about minute advantages and infinitesimal obstructions. Cobblestone tiles are added to the tracks and, like hills, do not allow for slip-streaming but can also narrow the track to a single lane. Just like riding on real cobblestone streets, it shakes things up in an uncomfortable way and can stymie any hopes of moving ahead or cause you to burn precious movement when you are trapped behind someone else.

While the Cobblestones can funnel things to a crawl, Supply zones (a necessity if adding the fifth and sixth player), opens things up by giving a speed boost (every card played is counted as at least a four) and provides three lanes for possible move making. I love these areas for the savory decisions you have to make. The odds are that most players in the Supply Zone will be moving exactly four spaces, either burning exhaustion cards or playing lower cards and “drafting” on the boost. Knowing (or assuming) that, this could be the perfect opportunity to slip-stream or burn an exhaustion card of your own... or risk playing a card above four to breakaway and make your move.

All the new track pieces also come with suggested layouts for already tested tracks and tips on how to design your own tracks/stages – The short version is: Take one base game tile out for each new one added. It should probably go without saying that you should also not stack a mess of hills and cobblestones together. I say “probably should go without saying” because anyone who has ever downloaded a level for Super Mario Maker knows: Difficult doesn't always equal fun, people.

As I mentioned in the opening paragraph, one of the key additions in Peloton is that you can now add a fifth and sixth player. On my planned gaming nights, I am assured of a captive audience of four players: Myself, my wife, my cousin and my sister-in-law. Sometimes there will be more players and the ability to accommodate them is something that will get Flamme Rouge more table time. Since the card selection phase happens simultaneously, adding one or two additional players only adds a speed-bump of extra moments to a game that already has an exceptionally modest playtime. If you are wanting to play with fewer players, the included Dummy Teams add the option for solo play or simply toss them into a two, three, or four player game for added traffic. Just be forewarned: Losing to a deck of cards isn't exactly ego enhancing.

The strategy improvements of Peloton are just as subtle as the strategy found in the original release. I'll wager that if the timing, slip-streaming, and final burst mechanisms didn't entice you in the base game, the delicate additions found here well also fail to set the hook. They don't “fix” anything from the original release, but they do go far in enhancing it. And everything in this release is supported in the Flamme Rouge Companion App I mentioned in the original review. So, if you took my advice and are playing with it, your tour just got grander.

April 30, 2019
Rating
3.5
Flamme Rouge: Peloton
The strategy improvements of Peloton are just as subtle as the strategy found in the original release. I'll wager that if the timing, slip-streaming, and final burst mechanisms didn't entice you in the base game, the delicate additions found here well also fail to set the hook. They don't “fix” anything from the original release, but they do go far in enhancing it. And everything in this release is supported in the Flamme Rouge Companion App I mentioned in the original review. So, if you took my advice and are playing with it, your tour just got grander.
W
WadeMonnig Top 10 Reviewer 195 reviews