Maid in Japan: A Tanto Cuore Board Game Review 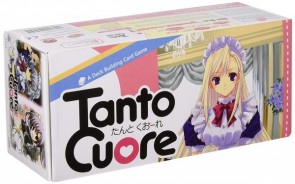 Dominion in a Dress

I knew exactly what I was getting into when I requested a copy of Tanto Cuore for review. I mean, just a quick look at the text on the back of the box should clue you in “Be the greatest master! Tanto Cuore is a deck building game for 2 – 4 players. The players take the roles of “masters of the house”, employ a lot of cute maids, and are served by them while slowly filling out their house (card deck).”

Come on, that is just the back of the box on a something that rates over 9000 on the DragonBall Z double entendre anime meter. So, I was totally excited to check it out....well, not like THAT. Geez, get your mind out of the gutter. The reason I was (*opens thesaurus*) aflutter? Stimulated? Teased? (This is just getting worse) was I was going to bring it to the table, without preamble, and introduce it to my wife. If I did this on YouTube, it would probably call it a “social experiment.” No sir, this was going to be pure entertainment gold and “simply for review purposes.”

This is the exchange that took place after I sat up and started to teach Tanto Cuore:

“These are the love cards. They act as the currency in the game, you'll be using them to employ the maids in town” *waits with baited breath* 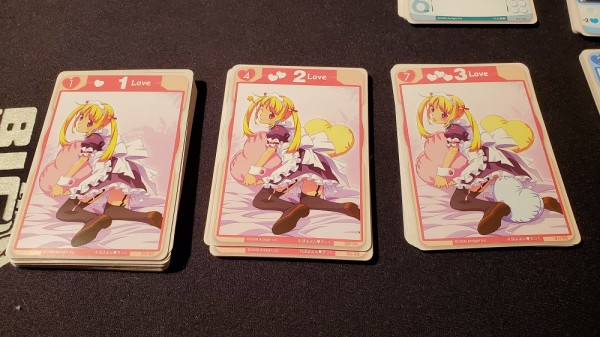 “Is she humping a pillow?”

*picks up the 3 love card and gives an innocent look* “Is she? Well, her face is kind of flushed, she is on all fours, looking back...”

“Wow, nice catch my love, I missed that...probably distracted by the heart-shaped pillow between her thighs.”

It was an auspicious start to the rules explanation, so I continued...

“So, when you want to take an action with the maid, you'll be looking for this little serving symbol...”

“You're servicing a maid?”

“No, no it's called serving and it's represented by this finger icon..”

God, we're all 12 years old again...and now it will always be referred to as fingering...it's almost like the game planned it that way. Still, the rules explanation continued.

“These maids are chamber maids, you can score victory points by putting them into your private quarters...”

“Now you're just making shit up.”

“...and up here you'll find the Private Maids. You can only have one of these active at a time. But you can have back-up private maids.”

“Of course you can. Because?”

“Well, the other players can play an Illness on a maid, or give them bad habits.”

“Like posing on all fours when they should be cleaning the house?”

“Well, one persons bad habit is another persons....(trails off)”

Once the rules explanation was complete, we dived into the game. My wife quickly grasped the rules and snagged a private maid that allowed her to employ two maids per turn. Her grasp of the actual card names, was a different story.

“I'd need a nap after that too...Give me her and Ménage à trois”

And the next round:

“Aww! Give me the poor little cute cosplay maker girl” 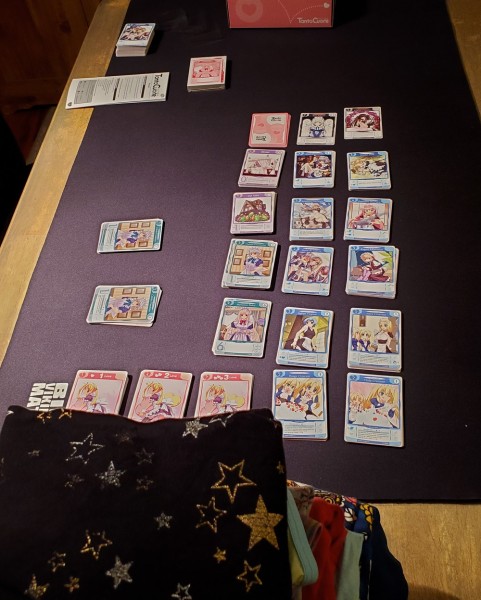 All these freaking maids and I still can't get the laundry put away.

While I went hard on the Safran Virginie cards (which reward with extra VP for each set/copy you collect of her), my wife decided to collect sets of Cresent Triplets (Azure, Rouge and Viola), three separate but low cost maids that reward collecting full or partial sets of them. We thinned our decks by “Chambering” maids, which pulls them out of your hand and puts them aside as VP to be tallied at the end of the game.

When the game completed, we scored up and my wife beat me by 10 Victory Points.

“I like it. I don't care for the Illness and bad habit cards but that is just because I don't like being mean.”

On the Jessica scale of game rating “I like it” is high praise indeed. It means “Don't dare get rid of that, I want to play it more.” And we have, and at various player counts and it has always been a good time.

Tanto Cuore completely consists of cards and I would have preferred that they have a bit more texture to them. The quality is fine but when you have to stack 10+ cards of each maid into the employ area, they can tend to slide around. But, if you plan on sleeving them to stop them from getting sticky or whatever, it is a non-issue.

Tanto Cuore theme is all about plausible deniability. All of those references you are making are just because YOU have a dirty mind. It's just a simple hiring-maids-with-love deck builder! But it is a extremely solid deck builder with player interaction via a few “take that” cards. On the other hand, it is also just Dominion in a dress. Granted, when you are playing Dominion, you don't risk Wil Wheaton walking though your live play and saying “Oh, you're playing your pervy maid game!”

If you like your deck builders with a touch of ass...errr...class....

If you enjoy collecting maids and locking them into your private chambers...

You know what? Let's just let my wife wrap this up.

“Honestly, I was surprised there weren't more boobs hanging out.”

Oh, just wait for the expansions.

WadeMonnig replied the topic: #301635 11 Sep 2019 10:09
I will say she isn't easily offended. I think she was more
Upset at the lack of Goddesses in Divinity Derby than anything in Tanto Cuoro.

Sagrilarus replied the topic: #301642 11 Sep 2019 13:15
In spite of global communications Japan still manages to have it's own way of things. Parts of their culture still flummox me.

Sagrilarus wrote: Parts of their culture still flummox me.

Like the seemingly never-ending appetite for the pervy sexualization of young girls?

Michael Barnes replied the topic: #301648 11 Sep 2019 16:43
I’ve been holding back all day but I can’t anymore. This is some pedo ass shit. “Plausible deniability” sums it up. “But these childlike girls are supposed to be adults, they have jobs.”

Vysetron replied the topic: #301773 17 Sep 2019 11:03
On our way out of our weekly game night my wife got lured in by the newest "Tanto Cuore: now with butlers and couples" edition. She read your review and died laughing. We own it now.

Vysetron wrote: On our way out of our weekly game night my wife got lured in by the newest "Tanto Cuore: now with butlers and couples" edition. She read your review and died laughing. We own it now.

I actually really liked it???

So Winter Romance makes a couple key changes. It's about 50/50 butlers and maids. Pairing them into couples is the main way you score points. Critically these don't have to be straight couples, and you get bonus points if you manage to get them married. We ended up throwing as many gay weddings as hetero ones. I made audible joy noises when I successfully officiated Shirley and Kimberly's wedding, and felt like a proud parent when I sent my boy Shishido down the alter with Jimmy.

"So when you successfully make a couple, you take the other player's card. Then you get a friendship card and the person who lost it gets a social one."

"Looks like the friendship cards don't do anything until you get three, then they're only 1 point."

"So wait, Leopold just hates couples? Even married ones?"

"Ok I'm going to make an approach - god DAMMIT you have Herbie again?!"

*several turns pass, I play a blizzard on the chapel they got married in so that it scores no points*

"I told you this relationship was doomed to fail!"

"Spending 4 love cards, I'm discarding the blizzard. Fuck you, they love each other."

We're already planning to revisit it soon to try different cards, new strategies, etc. Vanilla TC may be kind of skeevy, but the winter one is actually pretty great.