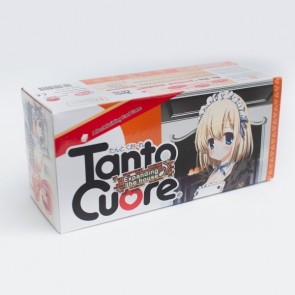 If you read my review of Tanto Cuore, you know that one of the things my wife and the other players in my core group didn't like about the original release was the “Take That” cards. If someone started going with the Illness or Bad Habit cards, it turned into Geto Boys ala Tony Montana “You wanna go to war, I'll take you to war.” and the nice little set collection game becomes purely focused on messing with the other players. If you want a return to that pervy little set collection game that virtually nullifies the “take that” aspect, Expanding the House is an excellent expansion.

Tanto Cuore: Expanding the House both serves as a stand alone game or it can be combined with other Tanto Cuore releases as an expansion. The Illness and Bad Habit cards aren't found in this release and, instead, you'll be purchasing house expansions like Estates, Gardens, and Lily Gardens. Moreover, Estates and Gardens act to cancel some of the negative events that can be played upon you if you happen to be combining it with other Tanto Cuore sets. Even the private maids are distinctly more “positive” with only Mika Yakushido being the exception: She is played on another player and requires that they discard one “love” from their hand at the beginning of their turn.

Some of the maid cards are a little more “Robust-y” in this expansion. It is a eclectic mixture of stunningly rendered totally-safe-for-work maids and then you come across the likes of Felicity Horn: wielding a set of dangerous weapons that could easily poke your eyes out...and she carries dual daggers too. Everyone's cringe scale is a little bit different but our initial plays seemed to have a few more eye rolling “Oh, Lord” explanations than when we debuted the base game. I included some of (in my opinion) the “racier” ones in my pictures for this review, because, if you want to be outraged, the tame ones are just going to be ignored anyway. The card powers for each new set of maids both expand on and integrate well with the original release. Unfortunately, even with the extra space for cards that was found in both the base game box and this expansion, you don't have enough room to combine them together and discard one of the boxes. I guess that extra space is purely for promo cards.

If you choose to combine Tanto Cuore and the expansions, it is as easy as adding in one set of maids and removing another. The chambermaid chiefs are still the larger sets that are either (depending on your point of view) clogging up your deck or providing you with constant points every turn as you “chamber” them. One of them, Colette, has become a running joke at our table. It has become synonymous with being useless and in the way. When “Quit being a Colette.” has become a standard term, you know Tanto Cuore has become ingrained into everyone's head.

As I said in my original review, Tanto Cuore is essentially Dominion in a Dress. After a recent play, I asked everyone if they would prefer to play something like this in a generic fantasy setting, the answer was a unanimous “No.” We like our cute, perky and sometimes slightly pervy Maid Collection game just the way it is. Even ten years after it's original release, it can still create a stir as a fun, intriguing title.

June 15, 2019
Rating
4.0
Tanto Cuore: Expanding the House
Tanto Cuore is essentially Dominion in a Dress. After a recent play, I asked everyone if they would prefer to play something like this is a generic fantasy setting, the answer was a unanimous “No.” We like our cute, perky and sometimes slightly pervy Maid Collection game just the way it is. Even ten years after it's original release, it can still create a stir as a fun, intriguing title.
W
WadeMonnig Top 10 Reviewer 195 reviews