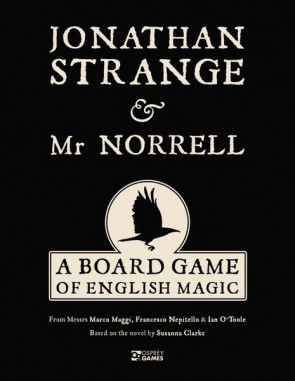 Game Name
Jonathan Strange and Mr. Norrell: A Board Game of English Magic
Publisher
Osprey Games
Designer
Francesco Nepitello
There Will Be Games

There's an email in my inbox that has made me catch my breath. It says there's going to be a game based on one of those rare books that I never wanted to end. After the cover closed on Jonathan Strange & Mr Norrell, I carried it in my heart for weeks. So why, then, has this news given me a sense of panic?

Jonathan Strange & Mr Norrell told a story of competing personalities. The reclusive yet arrogant Norrell contrasted with the charming yet reckless Strange. They wove a wonderful world but with thick threads, light on detail. It ended where it did because it was right to do so, leaving me hanging, just a little, for more. These qualities simply don't translate into strategy.

My fears are soothed a little to learn that the designers were the same team who'd worked such wonders with War of the Ring. Yet when the game arrived, in a smart book-mimic hinged box, I couldn't help a little trepidation. It didn't take long to flick through the short rules and see what they'd done with the theme.

Each player takes a character from the book: each is mechanically the same, save for one minor special action. They travel the map seeking to match locations with cards in their hands. These can either be a Social Engagement, which gets more cards, or an introduction, which gets bonus abilities. The cards also have a second use which is to contribute elements toward Magical Feats, the completion of which scores victory points.

That's it. I resort to blowing on the page edges, looking for more. When that yields nothing I turn to the card decks. In the Introductions, I find Steven Black and Lady Pole. In the Characters deck, there is Vinculous, his extraordinary story reduced to giving me one bonus element. The titles of many Magical Feats mirror those of the book but completing them is just symbol matching. That's it. The Raven King is nowhere to be found.

I don't know whether to be outraged or relieved.

The only way to resolve the hanging question seems to be to play the game. And, in truth, it conjures a more convincing spectre than I'd anticipated. We have fun imagining ourselves at grand balls in Venice and meeting the mad King George III. We marvel at the metagame of visiting the city of Bath on the board when we are, in fact, playing in the city of Bath. We laugh at ye Olde Englishe of the newspaper headlines that serve as Magical Feats. The art is wonderful. But the rules prove no ritual to bring forth Strange or Norell: they remain pictures on their sheets.

What they do bring forth is a surprisingly old-school game of making the best from your hand of cards. The dual-use play of each is the key to the strategy. We find each turn is a frenzy of re-arranging, like suite-sorting in a playing card game, as we figure out the optimal path around the board that turn to fit in the two allotted visits. Then cursing as we realise we also need the cards we'd picked for Magical Feats and starting again.

Quickly, we discover that gambling the odds is key. Attending events lets you draw more cards where you may, or may not, get the symbols you need for the Feats you're aiming for. With six different elements, this feels a total crapshoot at first, a frustrating lunge into the unknown. But you can moderate it with your one action for the turn, some of which let you mess around with the elements you can play. Other actions, like extra movement or acquiring powerful books of magic, are far more tempting on paper, ensuring this is a sticky pick to do the best.

So sticky, in fact, that player turns take a while. I would not want to play this with the full complement of four. With two, though, it passes pretty fast and, as it concludes, we declare ourselves satisfied.

Yet as I pack it away, I'm left with a nagging doubt.

One of the few elements from the book that's wormed its way into the actual play is that of the antagonist, the Gentleman with Thistledown Hair. He exists merely as a power track which increases every turn. In theory, a player can end the game early by having more points than he has power. And the rules imply that if no-one manages this, all the players lose, although the one with the most points still wins, kind of.

The problem is we are both miles behind the Gentleman at game end. Who wants to win, kind of? I resolve that I will solve the puzzle of how to beat him.

Over the next two days, this quest consumes me. Considering the pace at which his power grows versus that of player card draw, I cannot see how it can be done. I flick through the rules again, searching for a mistake. I even mail the publisher who assures me it can be done "with practice". So we play another game and I am lost, totally, to working this out. With no actual player interaction in the game, this has little impact on how we play. We have fun failing, again.

Baffled, I resort to soloing it. There's no actual solo rules but the need and speed with which you try to beat the Gentleman work as a satisfying proxy. Focusing every faculty on trying to get things right, I still fall a dozen points short. Next day I can barely work, barely converse. All the spare capacity in my head is dedicated to beating the Gentleman.

Mid-afternoon suddenly, a flash. I've been playing each aspect of the game as an optimal efficiency exercise. But what if being optimal in one aspect stops you being optimal in another? I'm flooded with excitement.

I can't wait to get it back to the table that night. At first, my opponent wonders what the hell I'm doing as I start to fall behind. But then my plan begins to bear fruit. As the game progresses I start to conjure more Magical Feats than ever before, rushing far into the lead. But I'm still behind the Gentleman. On the very final turn, I throw everything I have at completing Feats. My fingers shake as I count up my tally.

I shriek with delight as I find I've done it, by a single point.

My demon exorcised, next day I begin to move on to other things. There are still riddles remaining. I beat the Gentleman on my final turn when, in theory, he can be beaten much earlier and I still have no idea how. But having achieved my goal, these questions seem less urgent, the clarion call of play more distant. I'm not sure, now, whether I was, in fact playing a game or solving a puzzle. Either way, it feels an activity more suited to the conceited, isolated Norrell than the charismatic and boisterous Strange. England, it seems, must wait for the Raven King a little longer.

drewcula replied the topic: #298793 24 Jun 2019 08:04
I too, love JS&MN. So much so, I met S Clarke and had her sign my HC copy. Tell me you enjoyed the short story collection.
Thanks for the review. I'm pleased to know there is some value here, but I'm still on the fence. My wife would be my primary opponent, and she has a firm time limit on gaming. The box lid suggestion would indicate that this title will over-stay its welcome with her.
How long were your games?

drewcula wrote: I too, love JS&MN. So much so, I met S Clarke and had her sign my HC copy. Tell me you enjoyed the short story collection.

I have not, but have immediately ordered a copy!

drewcula wrote: Thanks for the review. I'm pleased to know there is some value here, but I'm still on the fence. My wife would be my primary opponent, and she has a firm time limit on gaming. The box lid suggestion would indicate that this title will over-stay its welcome with her.
How long were your games?

The game length is quite variable, but 2 players probably averages about 75 minutes. The first one or two might be more like 90. With practice it should get down closer to 60.

drewcula wrote: I too, love JS&MN. So much so, I met S Clarke and had her sign my HC copy.

I'm a little jealous. My first edition is practically begging for her signature.

The short stories are pretty good. Except for that one purposely written as if an illiterate person wrote it. Couldn't even finish that one.

I am not a fan of the book at all, but this is one of the only properties where shoehorning in a track as the villian actually makes any thematic sense. Thistledown is the villain but virtually never interacts with any of the characters in any sort of coherent, villanous way, besides Stephen, that continues throughout the story. There's a showdown at the end but it's hard to conceptualize his villanous activities before then as anything more than a vague track of threat.

boothwah replied the topic: #324133 21 Jun 2021 18:42
Just got this for Father's Day- My kids love the show - I have never been exposed to the source material. Excited to give it a whirl, since it guarantees plays with my girls.

Andi Lennon replied the topic: #324192 23 Jun 2021 19:24
This has been on my shelf for close to a year now whilst I muster the courage to check it out. One of my favourite novels of all time has a game? I fell over myself to grab it. Prior to play I casually scanned some reviews and...they were not kind. This is one of the best (and best written) of the bunch. Perhaps it's time.
Read More...