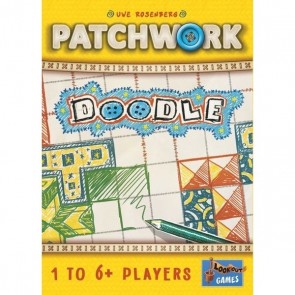 Two weeks ago, under the bright lights and loud voices of the social club where the gamers gather, we learned Welcome To. Surprisingly, given the catwalk vogue accorded to roll and write games, it was the first I'd played since Yahtzee. But my eldest daughter and I enjoyed it, although we guessed it would be a bit much for the rest of the family.

So started the search for an alternative. And now, here it is, Patchwork Doodle. The franchise doesn't fill me with anticipation. I'm a naysayer on the original Patchwork, finding it tiresomely mechanical. And a quick trip through the box contents doesn't do much to affirm that this is a good choice.

My concern is a lack of variety. In Patchwork Doodle you score points by fitting Tetris-like shapes together to make the biggest square you can. Each turn all the players add the same randomly determined shape to their grid. The only difference is the starting shape each gets dealt to work with. So it seems to me that pretty much everyone is going to make similar fitting choices and end up with pretty much the same outcome.

I wave the box around but the kids are scattering to screens, so I decide to give it a quick solo. As you build your shape, there are a few special abilities you can use to add extra strategy: a single square, snipping the shape up and so on. So I pull out one of the supplied coloured pencils and set to work. The pencil turns out to be rubbish, so I try another. It turns out they all are. I wonder how much it would have added to the cost to include some decent ones.

Then I glance down at my grid and get a shock. The pencils might be rubbish, but what they're made is actually rather satisfying. A coloured geometric mish-mash part random, part of my own devising. I get out some better pencils and carry on.

And as I pick shapes, turn them over in my head to interlock them with my growing pattern, pick colours for them, I begin to drift away. It's like yet unlike the way a great game can pull you in with theme. Instead of a narrative, though, I'm entranced with colours and shapes. Instead of excitement, it's soft and soothing. Mindfulness for gamers.

Calm, I arrive at the game end and tot up the score. It looks like a decent enough target for future games. But pleasant though the experience has been, I don't feel at all taxed by my decisions. I'm not sure there's much actual game here.

Attracted by the rolling of dice and the scribbling of pencils, my family materialises out of the woodwork to give it a try. The rules explanation is easy, although there's a slight stick on the special abilities. And so we set to work. The kids, at first, take their time picking pencils and drawing patterns. But the lure of a speedy resolution soon puts paid to that.

And when we're all done, and scores get totted up, a shock. Although the players have all coloured in most of their sheets, all the shapes are completely different. And more, one of the kids has won, by a handsome margin at that.

Perhaps there's more game here than I gave it credit for.

Patchwork Doodle thus earns itself a place in the bag for the next grown up's game night out. After we're done on Treasure Island it draws attention from the listless crowd, not quite satiated with their gaming, not quite ready for a longer game. When I explain the concept, I'm surprised how enthusiastic the response is.

The poor pencils dampen down the excitement somewhat, but this is a house with teenage kids and not a decent coloured pencil in sight. So we'll have to make do. Out come the cards, clatter goes the dice, round the circle of shapes we go, pondering and fitting, colouring and shading.

It's a big player count this time, but the simultaneous drawing makes the game go fast. A couple of players admit to getting their shapes wrong, and there are no erasers. We have to take their protestations that they know which square is which on trust.

And when we're all done, and scores a totted up, a shock. All the shapes are completely different again. And I, the only person who's played this game before, has come last. There's definitely more game here than I gave it credit for. The group clamours to play it again, after which I need to head home. They beg me to leave it behind, to which I concur, even though I've run out of home-printed sheets and they'll be using the included ones. The horror!

Usually, when I come home from game night, often to a dark, quiet house with everyone else in bed, I cannot sleep. My heart and mind race a little too fast for rest, turning over the excitement, smiling inwardly at the trash-talk. Tonight, after Patchwork Doodle, my eyes close on a kaleidoscope of colour and slide into a pastel dream.

mc replied the topic: #300904 19 Aug 2019 03:30
Matt, please, keep writing these. It's a great format for reading about games. They are enjoyable to read, but they also impart so much information about what you've played in the narrative.

Sagrilarus replied the topic: #300912 19 Aug 2019 11:42
Excellent review, for a game that my wife might actually enjoy playing. She's a quilter and has an eye on color and form at all times in all things, and the idea of putting Patchwork on the table in front of her was absurd. But this one might just clear the hurdle.

I'll be honest, I'm more interested in hearing about the feel of games than I am the mechanical aspects, though some effort needs to be put to the latter. This kind of review is invaluable to me, and I hope I'm hitting a similar balance in my more recent stuff.

But dude -- photos. Drop a couple of impromptu snaps from your phone in order to give us a peek at how it plays on the table. Would be much appreciated.

edulis replied the topic: #300929 20 Aug 2019 08:19
Thanks for the review. I added this to the list for games to play on Christmas eve with the kids. From your review it looks like something the whole family could play and enjoy. And we have colored pencils aplenty.