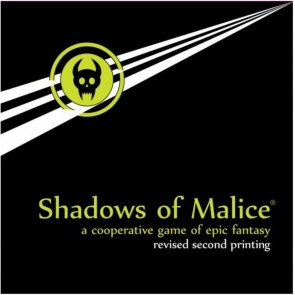 Most British people live in tiny houses, cramped together on our crowded island. And we're all stuck, in the midst of a housing crisis that has sent average prices ten times the average wage. So when a new game arrives, it's always to a mixture of excitement and unease. It's something new to explore, but where the hell am I going to put it?

So it's with some relief that the opening pages of Shadows of Malice make clear you can play the game with just two of its chunky hexes. I set it up that evening, on a dinner tray perched on a stool in front of the TV. My lone Avatar gets a random power, a random item and a scattering of plastic, winking coloured Shards. Then it's off to save Aethos from the encroaching shadows.

Shadows of Malice is very much a classic RPG on a board. It's co-op or solo. To win, I need to find which of the three face-down "wells" on my hex is a light well before one of the titular shadows get there. Each has a guardian which I can't hope to take on in my neophyte state. So I have to find and battle monsters to gain treasure and Shards until I'm bad enough to beat the big guys.

With my starting hex next to a creature lair, it seems churlish not to get right on with it. So I do.

Each encounter is randomly generated by rolling on a table. The rules say this is to encourage variety and imagination but it feels like pointless busywork. The dice are kind and I roll up a low-power "Sectoid" with no special powers. Some sort of giant insect or spider then, I guess. The combat dice are kind, too, and I dispatch it without distress.

Hoping for some combat bonuses I draw, instead, the Tunic of the Harvest. It's a nice name, I admit. But it just gives me more Shards which doesn't seem much help. I've been flipping back and forth through the rules a lot: they're clear but poorly structured for finding info. Doing so again, I recall one use for Shards is to boost combat rolls. So that's okay.

Satisfied, I trundle along the hills to visit another face-down random counter, a Mystic. Each can help me in a certain way but I won't know what until I flip it. Turns out this one is a healer and an alchemist. She brews me a Banishment Grenade, which I can use to get rid of shadows if I meet one. Speaking of which, one spawns on the adjacent realm board and bumbles about, moving randomly.

I pause, interested that, in my head, the plain blue counter is female.

Time to take on another lair. This creature roll builds something more powerful: an "Arboreal" with higher life and combat rolls and the "Vampiric" power. The extra details paint a crude picture: some kind of huge vine, thrashing about, searching for blood.

At this point, I learn how lucky I was in my first encounter. After a few tied rolls, the thing starts eating into my paltry life total. Dismayed, I burn all my Shards to get roll bonuses and finish it off with my starting item a Scroll of Woundcasting. It leaves me at death's door, with nothing. The treasure pull had better be good.

It is. The item is an Amulet of Life which gives me extra health to draw upon. And the cloak I gained from my first battle ensures my Shards get refilled.

Thus it goes on. I stumble around the board, facing crushing encounters and barely breaking even after each. Later, I will learn from the designer that this is because the game is super tough played with a single Avatar: even solo, you're supposed to run two or three. So my game splutters toward an inevitable conclusion. The shadow grows, enters Aethos, and uncovers the well before I'm in any fit state to challenge it, or any of the well guardians. It's taken about ninety minutes for me to lose, but a lot of that was rulebook reference.

For my second run, then, I try two. It's cramped on my dinner tray now. Avatars can split up but are vulnerable alone. Together, they can protect each other in combat and make better use of distributed equipment. However, the stack not only lacks obvious flexibility in covering ground but literally moves slower. When you're racing the shadows, that's bad news, requiring contact tactical re-assessment.

As my faceless stack of Avatars crawls across the varied hexes of Aethos, something strange begins to happen. The anonymity of those little ovals starts to suggest their status as distant saviours, unconcerned with the petty strife of the realm, only its salvation. The first guardian they attempt isn't just a "Terrovan" with "Searing" and "Deadly Gaze". It's become a burning creature of living stone, lava spilling from its vacant eyes as it rouses to crush the interlopers between fire and rock.

The tiny tray in my awkward living room has expanded into a world all its own. 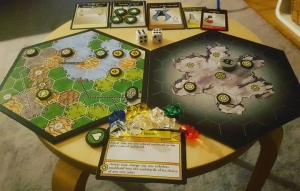 It's not a world I can manage to save, though, even with two Avatars. This time I'm playing the extended scenario in which the ancient evil, Xulthul, can enter the world and do battle. So we do, and I try and work my shards and items in the tactical puzzle that is combat to defeat him. The dice are not kind, and the tag-team isn't enough to protect me from his wrath. Though I know the game better, it's still taken the best part of two hours, time swallowed up by extra consideration, a second Avatar, and the final battle.

Because the game is co-operative, I figure it's worth a try playing it with my kids. It's too complex for them, really, but I can internalise the rules and walk them through. My eldest, who's suspicious of "strategy" games in favour of what she sees as the "story" of D&D, gets into it right away. The first monster we fight is a Reptilioid with Wraithform and Weaponry abilities. After we've thrilled along with the dice to defeat it, I ask them to imagine what it was we were fighting.

"A flying merman, like a ghost, but with a big knife," says the youngest, eyes shining. Her big sister, with her bigger vocabulary, describes a frilled lizard, with vicious spines, its body tapering into an ethereal tail with which it can lash and constrict its victims. Both are terrifying and so easy to imagine. Shadows of Malice has worked its dice-to-pictures magic on them both, too.

But as the game goes the magic wanes. First, the youngest, then the eldest, grow restless and begin to drift away, no longer bothering to picture to the world on the table beneath them. And that's okay. It's a little complex for them with its plethora of fiddly dice rolls to work the odds on. The more you add to Shadows Of Malice, whether it's more players or more terrain boards to explore, the longer it gets. Off they go, back to what little space my little house can spare them, to find other escapes on screens or pages.

There's no space to leave the game out, so I finish it anyway. It doesn't come to a happy end. And that's okay because it leaves me wanting to try again, the box out on the "currently playing shelf" rather than with those gathering damp in the attic.

Next day, we drive up to a park on the outskirts of the city, past avenues of stately Georgian houses in honey-coloured stone. Atop the hill, I breathe the cold air and get lost in the colours of the rolling autumnal hills beyond. What Arboran or Protean monsters might lurk there, I wonder? What abilities might they have? Maybe a shoebox house is a price worth paying for living in this lovely city, especially when I can escape to Aethos whenever I want.

October 30, 2019
Rating
4.0
Shadows of Malice
A uniquely open take on the traditional board RPG, crammed with prompts for your imagination, but it's a little long and fiddly.
MT
Matt Thrower #1 Reviewer 286 reviews

Gary Sax replied the topic: #303077 04 Nov 2019 07:32
Besides being pretty hard, the number one thing about this game is that you can run away costlessly from any encounter. If you draw something you're utterly unprepared for or is a lethal combo, you can and should run and refight.

Not a thing we're trained to do in adventure games because it feels bad and hurts the fantasy machismo.

Shellhead replied the topic: #303086 04 Nov 2019 10:03
Nice review. I don't currently need another co-op/solitaire adventure game, but I will eventually get Shadows of Malice anyway. I like how the game offers players the space to apply their imaginations to the setting instead of just serving up another generic Tolkien variation.

I had no idea that British houses were so small. I have an older American house, and it's still more than twice the size of a British shoebox house.

san il defanso replied the topic: #303483 06 Nov 2019 20:38
This game really does feel like an early crack at recreating the experience of original D&D. It's a very baroque design, but it feels that way intentionally. Like, there is so much dice-rolling that it actually makes the game a little longer, but it's clear it was designed that way on purpose.

It's a difficult game to get played, partially because I feel like I need to review the rules every time I get it out. It also works solo, but it a lot more fun with other people. I might actually try to get this played sometime soon, I have some friends who might really be into it.

Gary Sax replied the topic: #303520 06 Nov 2019 23:15
The new edition has some official options to change the dice rolling amount and way bonuses are calculated. I appreciate that.
Read More...