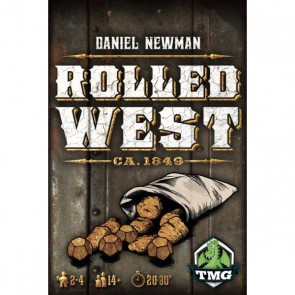 Reporter: Welcome,Ladies and Gentlemen, to the Gold Rush. Where plucky pioneers are braving the arid landscape to seek their fortune. Excuse me, Sir, can you tell us about what you are doing out here.

Man: Pickax Pete is the name, Precious Metal are my game. I'm racing to make shipments of Copper, Silver and Gold. I'm currently leading in both Silver and Copper.

Reporter: Thank you Peter. And over here we find Mrs....

Woman: Tammy Tentpole. I've been creating settlements, you can find me down in the high-rent Gold District.

Reporter: And you, sir, what are your feelings on the Gold Rush?

First Time Player: Err, I have no idea what I am doing.

First Time Player: Lots of choices...I think...But I have no idea where to start. Maybe I'll grab this boom town. * opens instructions and reads while walking * This one gives a bonus for Copper Shipped and Copper in contracts...do I have any of those... * Trips over a rock and tumbles down into a valley *

Reporter: Well, there you have it. Welcome to the Rolled West Gold Rush. Back to you, Ron.

There always seems to be plenty of choices to be made in Rolled West: Build Settlements, make Shipments of different types of metal, fulfill open contracts for precious resources, or invest in Boom Towns. But it really only provides an illusion of a multitude of scoring paths. Most of the games will be pretty close scoring wise but only because you really don't have a chance to “break out” in the six rounds of gameplay. Probably the most damning thing about this illusion of choice is that it feeds anyone with Concentration Constipation. They will investigate every possible way to score on every turn and lament over which choice to make, turning what should be a quick game into a slog through a variety of dead end scoring choices on every turn.

You roll four dice on your turn then always set one aside that will used to select the type of terrain you can build settlements on in this turn. You do NOT use it for anything else. Seems simple enough, right? But, be prepared for this to be the thing that trips up everyone for the first few plays. I'm not sure what makes it unintuitive but it is the one rule everyone just can't seem to make click in their head. The 12 sided dice you are rolling are pre-stickered which means they don't qualify as “Cool Chunky Dice” under the Geneva convention. 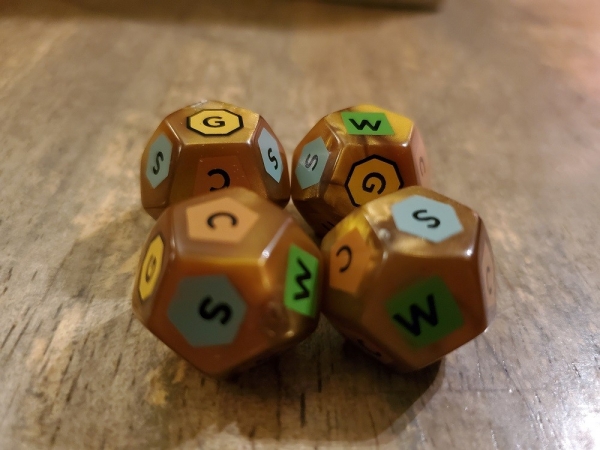 You are always at the mercy of the dice in Rolled West. Whatever plan you might have in your head can be thwarted by simply not getting the faces that you need. You can somewhat mitigate this with the “banking” system. This allows you to “bank” a dice for use on your turn from one of your neighbor's rolls. This also works to keep you engaged on other players turns. Even if you are playing with the full four players that the game supports, you only have one turn that you don't have to be paying attention to the dice. Just be aware that you aren't allowed to “bank” the dice that another player sets aside as their terrain (Just another reason that mechanism feels like a stumbling block). You can also bank a dice that you don't use on your own turn to be used later down the line. 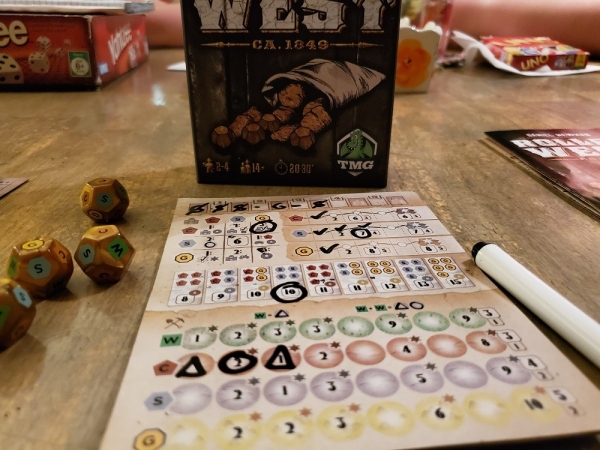 You'll recognize that the Boom Towns you can purchase feel like bonus objectives found in a variety of other games. But they are more reactive than proactive. Where a bonus objective would normally give you a general path to follow, the randomness inherent in a dice-based game means you can't really determine what path you will be able to follow. Instead of picking a Boom Town to decide what direction to take, it is a better plan to set off on the path that the dice lead you and pick up boom towns that enhance what you have already achieved. But, be prepared to pass the instructions around when someone decides to purchase one....and don't expect the one you really want to be available for what dice you rolled this turn. If you have been banking a variety of different resources, you'll probably be able to pick whichever one you want but if you decided to take a more focused path, they may elude you. 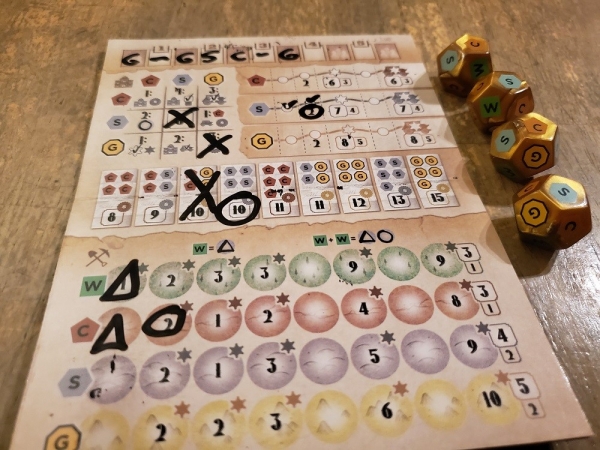 I do like the interaction that Rolled West has between the players. Between picking a dice to bank (which doesn't directly impact other players, you aren't taking them from them, just using them too) and closing down better scoring opportunities by securing them first, you aren't stuck playing head down solitaire when engaged in this game.

The biggest issue I found with Rolled West is that it never really follows though on the unstated promise that once you “get it” the game will open up. The initial plays are likely to leave first time players confused as to what direction to take. But, once you do grasp how to best score points, you find that the path you want to take is often blocked by what dice/resources you have to spend. It never really “filled” what I desire in a twenty to thirty minute filler.

November 13, 2019
Rating
2.5
Rolled West
The biggest issue I found with Rolled West is that it never really follows though on the unstated promise that once you “get it” the game will open up. The initial plays are likely to leave first time players confused as to what direction to take. But, once you do grasp how to best score points, you find that the path you want to take is often blocked by what dice/resources you have to spend. It never really “filled” what I desire in a twenty to thirty minute filler.
W
WadeMonnig Top 10 Reviewer 195 reviews

Jackwraith replied the topic: #304390 20 Nov 2019 13:30
Hm. I have the same problem with dice games, in that I'm not really enthusiastic about THAT much randomness in things I play. With games that require literal handfuls of dice (like most GW offerings), there are many ways to mitigate that randomness. You just have to time your attacks properly and focus your efforts in a couple specific sectors/units to make things really pay off. As a case example of their (very) long-term design processes, every time they offered up something genuinely random for Chaos, everyone avoided it because no one wanted to risk their whole game on a single roll of the dice.

I think the "banking" system has promise, but that sounds very slow for a smaller game. I really like the way Tiny Epic Galaxies attempts to ameliorate the issue of being dependent on dice. First off, you get one free reroll of any/all dice each turn. Second, you can spend Energy to do more rerolls, as many as you have resources for. Third, you can spend two of your dice to get one result with the Converter. And last, and more importantly, you can spend the other resource, Culture, to duplicate your opponents' die rolls and make progress on your own tasks. That's a lot of making up for poor luck on six-sided dice. Does Rolled West have anything like that other than "banking" for rolls on TWELVE-sided dice? If not, I'd shy away instantly.

WadeMonnig replied the topic: #304400 20 Nov 2019 18:56
Unfortunately, it doesn't have anything other than "banking." And what is bizarre is that you can have what would be consider in most games as a great roll (Say, four of a kind of Wood) and not be able to Really exploit it at all. You would set one aside for the terrain, spend two on building both a tent and a settlement on the Wood settlement track and, well, bank the last one because you really have nothing else you can do with it unless you can combine it with something you have already banked to buy a Boom Town. The banking system is just not enough to mitigate the luck of the dice. And, like you pointed out, other games that thrive on dice like TEG have found a fantastic sweet spot for mitigation while still letting you roll the bones.

Edit: And yes, while the dice are 12 sided, there are only 4 unique faces. Maybe they are just more pleasing than 4 or 8 sided alternatives.

Jackwraith replied the topic: #304403 20 Nov 2019 19:45
Thought about that after I posted. I'm not enough of a statistician to know how much odds are affected by a 1 in 4 of 12 possibilities, rather than a 1 in 4 of 4. It's certainly more digitally pleasing to avoid the triangular dice, as d12s feel like they're actually rolling, rather than just landing on whatever side. Root took advantage of that, even though those dice are only three possibilities.
Read More...