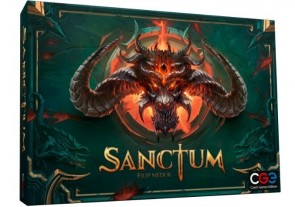 All it's missing is a license.

In a perverse way, Diablo is kind of a Eurogame. Beneath the action-RPG veneer, it is a game about incrementally increasing efficiencies. Sure, those efficiencies have to do with improving damage output and survivability as you wade through endless swarms of demons, but it’s really a game of shifting numbers around for maximal effect. It’s also a game where, essentially, you click on monsters until they dispense random loot that may impact those efficiencies. That rewarding feedback loop, along with mechanisms that allow the player to explore various combinatory abilities and effects, are what have made it a classic video game. And, if you are anything like me, you’ve likely had it in the back of your mind that there could be a great tabletop game in there somewhere.

Filiip Neduk, working under the venerated Czech Games Edition brand, apparently had a similar thought and his 2019 design Sanctum is an unabashed, ersatz Diablo board game from its boxtop image of a massively horned demon to its loot-and-level loop. Two to four players compete along a linear track, drafting sets of demons to personally battle to unlock class-specific skills and advance gems into a pool that are spent to equip the weapons, armor, and gear on the backs of each demon card. Unlike many tabletop adventure designs, the board is just a single path– geography doesn’t matter, just the monsters you smashed along the way. The final act finds the players assailing the Walls of Sanctum, calling forth the Demon Lord. From there, the game shifts gears and becomes a rather brutal gauntlet where each player’s character and their relative advancement is put to the test with a sequence of Fury Cards that represent the epic boss fight.

This is all very, very cool. The concept totally works, and I think there are some really smart pieces of design work that Mr. Neduk presents in Sanctum. The skill advancement is quite brilliant: there are three colors of demons and defeating one means that you get to advance a gem of the corresponding color up your character’s chart of skill cards and tiles. When a skill has no gems on it, you gain it. This is really where a lot of the key decisions of the game lie, as the idea is that you are more or less training for that big battle at the end and identifying which skills could lead to combinations in concert with your equipment to generate more Stamina, Focus, or damage reduction.

I also like the Stamina and Focus economy. These pools are spent to power gear effects and skills, and managing these pools is critical to success.  Deciding when to Rest can be a crucial decision as you might find yourself really wanting to pick up a set of demon cards to fight based on the gems you need to move up or for the kinds of gear they might have, but do you want to risk a battle with low resources? It’s not quite a race game, but there is an incentive to keep moving and to keep ahead of the competition, such as first pick from a treasure chest at the end of each board. There are also bonuses from Achievements to be earned, if you are the first to qualify.

Now, I’ve not yet mentioned how we are actually going to go about squishing all these demons yet because I’ve reserved that for the “I like this game, but…” part of the review. It’s strange, because I like about half of this design but the other half I do not. Some have decried the last act change-up, but I think that’s great in concept. Rather, my problem lies in the core action of the game- all the fighting.

Santcum is, for all of its puddles of demon gore and kick ass swords, is a game about drafting cards and rolling dice at them. Each demon card requires 1-3 D6 results to defeat or they bite you for a proscribed amount of damage which you mitigate with skills and equipment. That’s all fine, but this is one of those dice games where the dice rolling lacks a sense of drama, risk, or surprise. Many pieces of equipment and skill choices allow you to modify your die rolls so that it’s not often enough where a player is really in danger. There’s usually a fix. There is some risk in which demon sets you choose to put on your player board – for example, if you take on several demon cards with the same number on them then you are more likely to face damage.

And later in the game, the tougher demons require more fussing around with the dice and your assets. The Demon Lord battle really ups the tension dramatically as it designed to exhaust your resources. All the drama and risk is back-loaded into the las act. The finale really forces you to earn the win, but there again that work is in the fussing around with dice and assets.

But you know what, in a board game I don’t really want to fuss around with dice and assets to improve the result, even if that is frankly a fundamental thing that you are really doing in Diablo. At the table, I want to sweat the die rolls, I want the stakes to feel high every time I have dice in hand, and I want to deal with the bad results while cheering the good ones. I am absolutely not a fan of games where you roll dice and spend a few minutes fixing it in the name of generating depth and strategy at the cost of excitement and risk. And unfortunately, Sanctum is exactly that kind of game.

But Euro-style dice games are built on that very concept and there are plenty of popular examples of this kind of design- Kingsburg and To Court The King, for example. All things considered, Sanctum is a good game in this design space, regardless of my distaste for the “strategic” dice mechanics, and I’d choose it over just about any of its closest peers if only because the Diablo concept actually works. And the reality of it is that maybe that is the best way to represent a Diablo-style game on the tabletop as it is simply not possible to reproduce the action aspects of the video game, that awesome sense of an encounter escalating into a ridiculous melee before it reaches a seat-of-the-pants turnaround and you are left with mountain of treasure to sort through. But here, you get to think about it for a minute and make some adjustments before the slaughter commences.

Space Ghost replied the topic: #306240 16 Jan 2020 00:04
We are cut from the same cloth on this — for the most part I hate massive dice manipulation. First, it breaks the tempo of the game. Second, it makes rolling dice mostly pointless.

Michael Barnes replied the topic: #306241 16 Jan 2020 00:10
Yeah, it is the worst mechanic. Any time I see cards/tiles that let you flip dice over, add or subtract 1, etc. the game is already on a negative footing. Especially when it is combined with a worker placement concept which...is kind of this game. The dice are essentially workers that are assigned to fight the demons.

Josh Look replied the topic: #306246 16 Jan 2020 05:37
I’m working on the ICFTT episode about this, so I won’t go into it at length, but I will say that the dice manipulation was a total non-issue for me. Yes, this is a Euro game. The point is not to chuck dice and kill monsters, the point is to deplete as few of your resources as possible so that you can keep killing monsters later.

I kept doing this thing where every possible issue I could foresee people having (spoilers, I really liked Sanctum) I would look to Diablo and see that the same is true there. The lack of personality in monsters, the unsatisfying ending, the fact that it isn’t about whether I’ll kill this monster but what I’ll have left after killing it...that’s all Diablo. Luckily, it also nailed the things that makes Diablo fun.

The lack of a solo option is really the biggest strike against this game. There’s no need for me to sit at the table with other people to enjoy the puzzle it presents and I don’t think an AI would have been that hard to figure out to help make the race elements work.

Yet, I’m still playing it even after fulfilling my obligation to review it. I just played it yesterday and this time I really dug into my build and had a pretty great thing going on where I had this badass axe paired with the tribal tattoo and everything ran on either red or purple tokens. It really felt like fine tuning a Diablo build. And yet I still couldn’t care less that I lost. That’s probably the second biggest strike against it. The road to the end is fun, I even like the boss battle, but the winner is determined and it’s a complete whatever moment.

ubarose replied the topic: #306283 16 Jan 2020 15:07
When I met with Tony from Czech Games edition, he told me that Sanctum was designed for people who fans who want to experience the game in a different medium and share this world with other people. It's meant to be sociable, but still feel like a video game. Therefore you kind of play by yourself, but with other people. The rules even encourage you to do things simultaneously, so you don't have to wait while other players fiddle with their dice and equip their stuff.

I think it is very successful at feeling like a video game, but also providing the space to socialize with the people at the table.

scissors replied the topic: #306291 16 Jan 2020 16:45
Transferring video games to euro games seems to be kinda his thing - he seems to have done something similar with his previous game, Adrenaline.

i dont think hes gotten to scripting it yet, but everythings there and functional.
Read More...