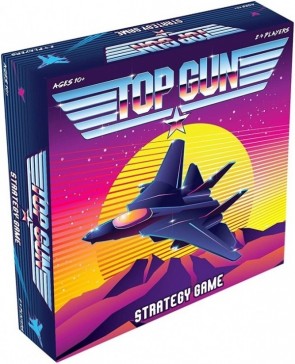 Takes my breath away.

There are a couple of standard elements I want from a licensed game. I want it to look right, feel right, touch on the themes of the parent work, and if it’s a good one then it’s going to let me vicariously do things that I’d like to be doing in the setting. It used to be that licensed games didn’t do any of that, but that all changed over the past 15 years or so after companies like Gale Force 9 and Fantasy Flight Games rehabilitated the notion of games based on transmedia IP. Now, the leaders in this design space are undoubtedly Prospero Hall, who have just killed it with excellent, intelligent designs based on killer brands such as Disney and Universal Monsters.

I knew Top Gun, their latest issue, was going to be good – especially after I saw that the design was going to be as much about volleyball as it is flying F-14s. But what I didn’t expect was for the game to not only be great, but also to completely diffuse the 1980s Cold War military fetishism and machismo of the film. You may have expected Top Gun to be a burly dogfighter with Tom Cruise’s Maverick giving you the thumbs-up for shooting down MiGs. But if you did, maybe you somehow didn’t “get” Top Gun. And you might be disappointed that there are no photos of him, Goose, Iceman, or anything else from the film

But this game doesn’t need pin-ups of Cruise or Val Kilmer to take your breath away.  The brilliance of how this game handlesits subject is in totally leaning into the camp aspect of macho flyboys stripping off their shirts between training missions for a game of beach volleyball with 1986 hot pink and neon blue flares reflected in their aviator sunglasses. It’s pretty clear that the rights granted to make the game don’t include images of the actors or the film, but this becomes a leverage point for Prospero Hall to do something really unique – it satirizes and sends up, while still remaining affectionate.

Similar to last year’s masterpiece JAWS, this is a two-part gestalt design where one game impacts the other. One of those games, is of course, beach volleyball. This is played out by bumping a ball token around from card to card, hitting it over a net to try to find where your opponent’s Whiff cards are. There’s a subtle game of hide and seek going on as you watch to see which face-down cards your opponent seems to be protecting.Put the ball into the sand and you get rewarded with Pilot Tiles and WSO (Weapon System Operator) cards – and thus an advantage when it’s time to suit up and take to the skies for a training Hop. The winner of the match also gets to be the attacker and choose the setup for the next segment.

The Hop segment plays out as a one-on-one aerial dogfight, with pilots plotting moves with two-hex tiles. These also indicate any change in orientation and elevation- yes, relative differences in altitude come into play here. These tiles are paired with a WSO card, which provides a firing arc as well as countermeasures arc- if your target is in the template, you can roll dice to get a lock but the attacker is in the defender’s countermeasures arc, there could be a penalty. The attacker’s goal is to get that lock (notably, not to shoot the other plane down); the defender is trying to hit a series of waypoints while evading that lock-on. There’s a special rule for pulling off the tricky “Flipping the Bird” maneuver, whereby the bird-flipper automatically wins the Hop. I love this.

The Hop almost feels like a streamlined and simplified adaptation of last year’s very excellent Battlestar Galactica space combat game with similar plotted movements, rotations, and a strong sense of aerial maneuvering. It’s ever so fussy though, with adjusting your plane’s height on a flight stand and working out which tiles to use as orientations change and you try to work out a moving – and firing solution. As far as mainstream, mass market titles go, this is as close as it gets to a more complex dogfighting game and it has just a bit more crunch than you might expect. It’s also full of excitement with thrilling reversals, unexpected escapes, and can’t-miss die rolls somehow missing.

After the Hop, it’s back to the beach for another round of volleyball. The end comes when someone gets a total of 12 points from the Hop, which takes maybe 30-45 minutes unless someone takes too long to plot their moves. Don’t let this happen. A slow player can bog the game down unnecessarily, and as far as I’m concerned the only benefit the 3-4 player option has over the 2 player game is that having a teammate may help speed up some of the decision making with two brains parsing the hex grid during the Hop. With that said, it should be stated that Top Gun is a two player game with a 3-4 player team variant. I don’t care for the team game, but others may require it to get this great game to the table.

This is smart, sophisticated design work at a level beyond most of what is coming out of crowdfunding or the major hobby firms these days. It’s highly refined, highly developed, and succinct – and it’s totally Top Gun. Prospero Hall is among the most interesting and progressive game design studios working today, and this title is a sterling example of why you should be more excited about this $27 game from Target than whatever the current $300 miniatures mash happens to be. Anyone can throw a bunch of mechanics together to make a game. Maybe even slap some fan service-y card text and some photo stills on it and call it a day. But it takes genius to pare away the burden of fealty to subject matter in order to      arrive at a mechanically sound and rather unexpected design that captures the thematic essentials with a sly, satirical élan.

And here I am, without an opportunity to complain about a plastic replica of Tom Cruise vs. a cardboard chit of Val Kilmer.

Gary Sax replied the topic: #306514 23 Jan 2020 08:59
I cannot express what an unexpected take doing the volleyball/dogfight bifurcation is in a *licensed game*. This seems like the sort of longshot art angle you pitch in a meeting that is immediately shot down by the IP holder or the company business person. I'm still not super interested but wow.

Michael Barnes replied the topic: #306521 23 Jan 2020 10:01
Yes it does. I get a sense that this was a low stakes, hands-off licensing deal- really just the brand, logo, and character names. They were probably just given carte blanche on it.

hotseatgames replied the topic: #306526 23 Jan 2020 10:39
I have been involved in many game pitches. I can picture the look I would get if I said "okay, so you play a volleyball match, and THAT affects the dogfight"

It's nice to see a game with a jetfighter on it be so lighthearted.

Space Ghost replied the topic: #306536 23 Jan 2020 12:16
Good review -- I continue to enjoy this game. Probably the best entry level dogfighting game you could get. I keep trying to pull off the "flipping the bird" move, but it is quite difficult (I love that you can invert your plane for no other reason than to brag that you did the maneuver). Enough bluffing in both parts of the game to make it fun.

Solid work by Prospero Hall -- not as good as Jaws, probably, but still does the IP justice. Excited to see what they do with The Shining

Space Ghost wrote: Solid work by Prospero Hall -- not as good as Jaws, probably, but still does the IP justice. Excited to see what they do with The Shining

I was excited about The Shining until I saw that it will be a traitor game. That's probably the right match between license and setting, but it's hard to get excited about yet another traitor game. Might still be great if they have other elements that help deliver the setting and themes. I am curious to see what they do with the board, if any.
Read More...