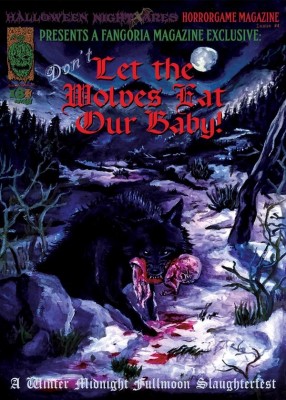 A dissonant chorus of howls pierced the sky,  sinister huddled shadows rose up out of the blinding whiteout, and the naked man’s grizzled member swung pendulous and unencumbered in the chill night air. Almost immediately we wished we’d had the car serviced back in Albuquerque. It was going to be one of those nights.

Printer companies are taking the piss.  Having somehow forgotten this I recently re-took the plunge and purchased my own home printer/scanner combo. Traipsing the aisles at my local office supply depot I was stunned at how affordable these things were. Two figures? But it looks so sleek! It even has an LCD display. I grimaced as I pictured the arthritic hands of Chinese youth, shackled to their production lines. Without being privy to the economic models of ‘Big Print’ I was content to hold my nose and relish in the deal, day-dreaming all the way home about the colour spreads, characters, errata and ephemera I was going to conjure on sturdy GSM stock.

I think I got about twelve pages out of it.

Which is a roundabout way of saying I now possess both a very shiny new paperweight and also the awesome new print-and play-game from bad-trip merchants The Emperors of Eternal Evil, Dont' Let the Wolves Eat Our Baby.

Huddled in lockdown as we currently sit beneath the creeping miasma of the Covid cloud, the world of print-and-play games has taken on a new relevance, a new necessity and a new sheen. I bypassed the swathes of roll-and-writes about trains, solo dungeon crawls and procedural table-fests to stride straight for this blackened bit of bounty, beguiled as I was by its pedigree as much as its frankly awesome title.

Released in conjunction with Fangoria, the fourth outing in the ongoing ‘Halloween Horrogames’ series of zine-games, and in essence a streamlined re-theming of their previous title Psycho Raiders, ‘…wolves’ strips away Raider’s filet of complexity, (and it has to be said, possibility) whilst retaining the grim essence of emergent fun that ran through its predecessor’s veins. Mechanically and thematically we’re fleeing over similar ground, however this time it’s blanketed in snow and thickets of pine as we stumble blindly in an attempt to save our offspring from becoming a gory repast for the maws of the wolfen hillfolk.

The kill card system makes its welcome return, albeit stripped of its symbol matching system, to merely smear gore over proceedings with a scandalous splash. Like all of its spine-stapled brethren it also features a nod to recurring characters, with the likes of Spud spiritually inhabiting his pelt-clad doppelgänger and even the Ye Olde Pissed Off Whale from Sea Evil being reincarnated in Moose form, presumably in some weird karmic sidestep on its road to Swarga Loka.

It’s a swifter game too, best suited to lower player counts, with 1v1 probably being the optimal way to engage with it. One player embodying the family whose engine has conspired with Murphy’s law to manifest trouble in the worst possible place, whilst the other sharpens their claws as the most sinister troupe of ‘rural types’ assembled since The Hills Have Eyes.

Time is of the essence and discretion is the better part of valour for the pitiable family as they contend with a dying daughter, a surly son and the burden of the titular baby. Only the father has any real capacity to choose fight over flight, armed as he is with a pistol more than capable of putting a few holes, both literal and metaphoric, in the best laid plans of the wolfen as they skulk and stalk their prey. It’s a stalling tactic at best though, and in keeping with the trope, he just as frequently pays his dues as the sacrificial lamb, buying his loved ones some time, even as his intestines are unspooled onto the frozen ground.

The ‘hide’ mechanism from Psycho Raiders makes its return here and is just as ingenious in its simplicity, with a good poker-face as essential as any rifle if the family are to exploit the advantage this confers and make their way to the safety of the map’s northern border and win the game.

Wrinkles and spanners come in the form of the weather events and NPC’s that can turn the tide and tables on their heads, as the seemingly benign spin of a clear starry sky renders players visible as prey, and the welcoming hope proffered by the outstretched hand of a fellow motorist, hunter or ‘naturalist and herb enthusiast’ can curdle and turn sour as their sinister intentions are revealed.

This element of happenstance lends the game its considerable replay value, as even if players grok the optimal actions for success, they can never be sure of what twists the events table and dice rolls will collaborate to conjure as each turn ticks over.

At a breezy 30-60 minutes, this slight affair makes for a perfect entree for the uninitiated, and whilst it never reaches the crow’s nest peaks of its predecessors, its aspirations are appropriately less lofty.

And it’s free you guys.

So make that masked, midnight run to Kinko’s, grab some scissors and have way more fun than Ikea piecing this thing together, and then even moreso as it rips you apart.

There are no user reviews for this listing.
Already have an account? Log in now or Create an account
Discuss this article
Log in to comment
Posts in discussion: Of Blood, Snow, Fur and Fang - Don't Let the Wolves Eat Our Baby

hotseatgames replied the topic: #310275 13 May 2020 14:22
Thanks for the review! Obviously since you are printing this yourself, mileage may vary... but how is the contrast on the map? "Hard to read" seems to be the standard for one of these.

Andi Lennon replied the topic: #310283 13 May 2020 17:29
I'd say.... less than optimal. The definition of the hexes tends to blend into the background, especially if you're playing in low light (and you absolutely should be), but it's far from a deal-breaker.
Read More...