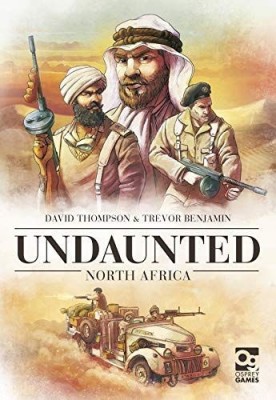 After so many years in the gaming game, I don’t often get excited by new boxes anymore. But when Undaunted: North Africa lands on the mat, mail quarantine goes out of the window. The original, Undaunted: Normandy was one of the best games of last year and an instant classic. On go the thick rubber gloves to open the box and get at the uncontaminated contents.

As a veteran of Undaunted: Normandy, I’m familiar with Undaunted’s combination of strategic deck building and tactical combat. Officer cards add rifleman, scout and other unit cards to your deck. When you play them, the matching counter on the modular board can take actions. Casualties remove cards from your deck. At a stroke, this simple system models morale and command structures with zero rules overhead.

This new game moves the action to the desert war between the Italians and the British. It makes me smile to see the box and the cards for the latter with culturally diverse art as a monument to the soldiers of the empire who fought for Britain. They’re troops from the Long Range Desert Group, a forerunner of special forces so, rather than capturing objectives, they’re here to blow them up.

The big new draw is that it adds vehicle combat to the mix. So when I lay out the board tiles for the first scenario, I’m disappointed to find it contains no vehicles. I presume we’re in for a training-wheels firefight to teach new players the ropes, which we could have skipped. At least, that’s how it looks s for the Italians, who take the first turn after winning the bid for initiative. But when I draw my hand of British cards, everything changes.

In place of my trusty infantry, I have an LRDG Engineer. He has a “demolish” action that allows him to destroy structures on the board, which scores me points. The Italians, meanwhile, have to control the same structures to win, but they lose their points if they’re blown up. As I sort through my hand, planning a strategy, it becomes clear how this tiny change transforms the game. Instead of a static firefight, this is a race with added high explosive.

First, though, I send my Scout to spy out the terrain, as my other units can’t move into unexplored squares. Over the next few turns, the scenario blossoms into unbridled carnage. The Italians know I can’t win without my Engineer, so they subject him to a murderous barrage. At first, I feel like he should hide behind the scenery but there are no rules for that, which seems an omission. Still, he makes it through the curtain of metal and destroys his first target. Whereupon I realise the Italians can’t reach their remaining targets without their Scout, so I begin to return the favour.

The Italians have the edge here with their traditional troops and greater firepower. But in another asymmetry, their deck is larger and less co-ordinated than mine. They’ve thrown all their cards into the mix whereas I’ve tried to keep my deck slim and fast. Together with a bit of dice luck, my frugality pays off and I blow the Italians off the sand.

We’re so keen to get into those vehicles that we set up the second scenario, with an Italian tank, straight away. Units inside can take different actions, like drive and repair, when their cards come up. I'm scared of the tank so I invest cards in my anti-tank gunner, as it's impervious to small-arms fire. This proves a catastrophic mistake.

The tank can sustain multiple hits, so while I succeed in disabling it, it manages to capture an objective first. And I've neglected to reinforce my anti-personnel capacity, leaving his infantry free to operate.  By the time I’ve bought Snipers and Engineers and got them into my draw pile, his Riflemen have dashed forward and seized a second objective for victory.

This can’t stand, so I demand a rematch. This time, I make sure to add a more balanced mix. That way, my Engineer will have some cover when he forays out to sabotage the enemy. Impressed by the power of his tank, meanwhile, the Italians go hard on the armour and sally forth to win the day.

What he hasn’t spotted, though, is that the board tiles which are impassable to vehicles make it easy to predict where the tank will move. So I set up my anti-tank gunner in a defensive square and slam round after round into its armoured sides. My sniper joins him, taking shots at the Italian infantry and scouts to devastating effect, knocking the counter off the board.

When he tries to bring them back on, as you could in Undaunted: Normandy, we go to check the entry point and find a surprise. Re-entry is no longer allowed in this version because the counters represent individual soldiers, not squads. It’s thematic and keeps games fast, but my opponent is understandably dismayed at the loss of this tactical option. Even though it’s to my advantage, I find myself also grieving its demise.

Focusing on firepower leaves my Engineer slow off the mark. By the time I’ve demolished my first target, he only needs one tank driver card to control his second space and win. So I go hard on the anti-tank, roll well and disable his vehicle. He then makes the disastrous decision to get out and fight on foot, when the very next turn he gets a fistful of tank crew cards and repairs the vehicle. In the end, its a highwire card race to see who’ll draw what they need first, which the Italians take in a thrilling finish.

So far, it feels like Undaunted: North Africa has swapped a pinch of deck strategy for a profusion of on-board tactics. Over the next slew of scenarios, the advantages of this approach become clear. In the previous game, many scenarios got bogged down into static firefights, grinding out inches for that last objective. It felt suitable for a game of infantry combat, but it was a limitation. Undaunted: North Africa has some similar scenarios but it diversifies into a dazzling range of demolition runs, escort missions and daring rescues.

I put Undaunted: North Africa back on the shelf, next to Undaunted: Normandy. The boxes are the same size. But between the asymmetry, the variety and the potential board and deck strategies, the newer game feels the bigger carton. It’s extraordinary how this simple system has yielded two superb yet quite different games, each special in their own right. Impressive as Undaunted: Normandy was, I never expected it to have the potential to blossom across theatres of war. Now I’m dizzy with anticipation as to where Undaunted could take us next.

Are these new designers? I’ve not heard of them before this.

Are these new designers? I’ve not heard of them before this.

Fairly, but this isn't their first game to make a wave: they did War Chest early last year. Wasn't entirely to my tastes but was pretty popular.

David Thompson has also made a couple of pretty innovative wargames in Pavlov's House and Castle Itter.

Blackwells has it for $23, free shipping to the US. Guess I’ll go in for it!

Michael Barnes wrote: It’s such a tremendously great system- I just need to get over my allergy to anything WWII to really enjoy it.

This past weekend I played three games of the Normandy edition and I think the biggest thing I took away from it is just how important theme is for me. The system is ingenious, the tactical decisions engaging and the amount of playtime/content you get for your money is awesome. And yet...although I had fun, the theme and art are so very pedestrian that it simply didn't excite me in a way that's going to see it hit the floor very often.

The much praised 'human element' simply comes down to a few names written on the cards and I'm sorry but I didn't weep for any of them. That may have been compounded by the fact that I was far too busy doing a ridiculous German accent and screaming ACHTUNG at every given opportunity. ( I bet $50 you'll do it too however, we're only human.)

Now give me this same system with some Emperors of Eternal Evil theming and we're in 'game of the year' territory. Alas, I simply don't give a fuck about Sergeant Chuck Applepie or Fritz Von Strudel and yet another tedious re-telling of America's last true hurrah on the world stage.

The Boomer obsession with WWII needs to die. I just do not give a flying fuck about playing another WWII game. It’s more overplayed than “renaissance trader” or “impress the king” ever were. FFS just make some shit up and base it on WWII- like the old GW Battle for Armageddon- it was basically Battle of the Bulge but in 40k. And it was not BORING AF.

I love this game though, I really do. I just rebought it and the new one at that Blackwells price so I’ll grit my teeth and bear it.

I do like the illustrations- I like that they are stylized comic drawings instead of photos or some fucking boxes with Xs in them or whatever.

Andi Lennon replied the topic: #311496 29 Jun 2020 20:07
Block Wars would be awesome. It'd be a simple re-theme for them to do. Or hell, go hog wild with it, make it about a psychedelic dreamscape where disembodied neuroses are manifest and do metaphoric battle with chemical compounds and beads of insight. Set it in an unexplored pit of the Mariana trench where translucent organisms shoot phosphorus jets at one another in an attempt to procreate. I dunno- anything, anything other than more vanilla Greatest Generation revisionism.