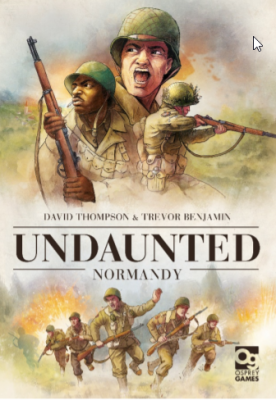 A two-player deck-building war game, pitting players against one another in the European theater of World War II.

Jackwraith replied the topic: #309945 04 May 2020 22:48
I've heard nothing but positive things about it. The only reason I've held off trying to trade for it is that I already have a ton of 2-player wargames.

ThirstyMan replied the topic: #309949 05 May 2020 02:28
I've tried really hard to get into deck building games, in general. Unfortunately they leave me totally cold. Dominion, MTG, Star Realms, Ascension etc just can't get into them. I can't see that this will be much different.

Msample replied the topic: #309951 05 May 2020 07:16
Played three rounds of UNDAUNTED NORMANDY one weekend. My friend who bought it is def on the lighter side of wargaming vs me. I was a bit underwhelmed. I wasn't expecting ASL or Combat Commandeer, but a few things bothered me:

- Scouts seem over powered. Same fire attack as a squad, and a higher defense - the only offset is they have less staying power due to having fewer cards .

- There isn't any differentiation between what would be considered Melee/close combat vs ranged attacks other than a lack of a range modifier. So again Scouts and MG teams are not much different than a squad for holding a space.

- the German and US units are exactly the same - no differentiation whatsoever. Even if you toss out the need for any sort of historical flavor, from pure game design perspective some sort of asymmetry gives a lot of replay value as well as design opportunity down the road.

- the format screams out for some sort of random event mechanism; as it is seems to lack any sort of narrative flavor.

There are some interesting ideas, but it didn't strike me as having a ton of replay value. I get that I am not the target market here but the juice doesn't seem worth the squeeze if you've already played something meatier. I can bang out a game of Combat Commander in under two hours usually I'd rather just do that.

mads b. replied the topic: #309952 05 May 2020 07:25
The main difference between scouts and rifleman sguads is that the latter can hold ground. So basically you can use your scoutes and machine gunners to decimate your opponent, but if you lose all of your riflemen, you won't win the game.

I've only played twice with an opponent and once solo just to go through the game. I like it a lot and I think the different scenario setups (including decks and available cards) make the two sides feel pretty different. But I believe it's one of the changes they are implementing for Undaunted: North Africa. .

As always, my bigger problem with the Golden Geek Awards is how random and arbitrary their categories are. Undaunted: Normandy is NOT a Wargame. Period. I am far from a grognard, but at least I know that much.

As a war gamer who has played it, do you think it should be classified as a wargame?