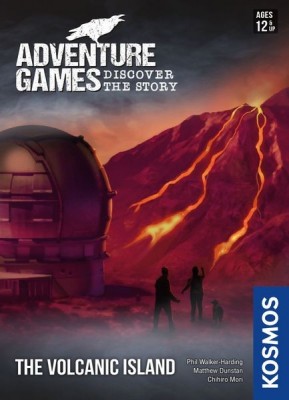 Hey! Are you ready to be one of the four students on a volcanic island who will face mysterious events? Journey to a world beyond your front door!

You will need to solve puzzles! *Rip-off Jeopardy music surges*

Explore areas! Have people talk to you! Look for clues and combine various items!

As you may have guessed from the intro, the gameplay of Adventure Games: The Volcanic Island is distinctly point-and-click, which might have been fine in 1990. But even on an analog playing field, it just feels dated....and not in a fun-nostalgia-flashback type of way but more of insert 16 floppy disks to install kind of way. No matter how many explanation points you put in the description it is still just taking the role of one of the students and then, gasp, going in turn order! Try combining items until, Bam! It becomes a new item! Marvel at a story line where you can't quite tell if it is awkwardly worded as part of a riddle or simply just a stilted translation.

At risk of “spoiling” the first ten minutes of the game, one of your first tasks takes you to a little village and, with one character talking to a shop owner, you are asked (while they are distracted) if you want to break into a home in the village. Our answer was a resounding “No.” Why would students who came here on what is basically a field trip suddenly decide to break and enter? But, of course, we were pretty damn sure that is exactly what the game “wanted” us to do. And this wasn't an interesting dilemma of any sort, it was a “Go against what you actually would do because of Fear of Missing Out on some clues.” To put it another way, this is just one instance of the game not immersing you in the story, instead it was about making a decision on what you think is expected of you in the game. 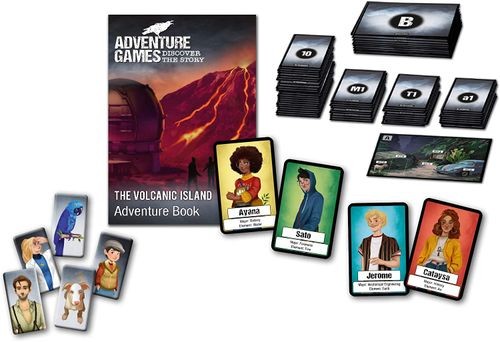 Another problem is the actual storytelling itself. It never really “feels” of an actual adventure. One of the joys of watching a movie or reading a book is putting yourself in the characters shoes when making decisions. How many times have you thought (or said, if you are one of THOSE people when watching a movie) “Nuh, uh. No way, don't do that, it's going to lead to a bad end.” When events lead to those “bad ends” in Volcanic Island, it is rarely, if ever, foreshadowed in any way. It deprives you of those moments of feeling smart for avoiding a situation because, most times, it just drops events on you without warning. And even the basic “Let's split up” isn't an option when it is obvious that it would be the most rational course of action.

There are three chapters of play with each coming in at a average of about 90 minutes each. And the game is billed as, to paraphrase, “An escape room without the time restraints.” Except, one of the mechanisms is the game is a literal watch that moves the plot along when you come across the phrase “Time Passes” in the book.

The nuts and bolts of the game are also an issue: they simply are not interesting. It never feels like you are actually playing a game, just dealing with a simple graphical user interface to push the awkward story forward. There is no inventory management, engine building, deck building or anything mechanically interesting about “playing” the actual game. This is particularly disappointing considering the involvement of Phil Walker Harding, who has crated some imminently enjoyable games. At one point in the game, you are given a blatantly obvious choice that will either 1.) End the game almost immediately or 2.) Possibly extend the game. I think it is VERY telling that we unanimously chose to bail because the slog wasn't worth the possible reveal. And going through the game again to find out “what we missed” wasn't something that any of the players of the original play-though were interested in. So, even though the game can be played though multiple times, why would I push that on a new group?

Kosmos may have been aiming for a more relaxed version of the escape room genre with this release but it misses that mark.

January 08, 2021
Rating
1.5
Adventure Games: The Volcanic Island Board
Kosmos may have been aiming for a more relaxed version of the escape room genre with this release but it misses that mark.
W
WadeMonnig Top 10 Reviewer 195 reviews

We did enjoy the game despite its problems at first, but when coming back to finish it a few weeks later our enthusiasm was completely gone.

WadeMonnig replied the topic: #318001 13 Jan 2021 15:06
I think we would have had more enthusiasm (though i doubt it would have lasted) if the story would not have been so jarring. It had a tenancy to go from a whisper to a scream which is likely to do with the game structure coupled with poor storytelling.

Jackwraith replied the topic: #318008 13 Jan 2021 17:39
Oof. Sounds miserable. And your point about assuming a role in entertainment is spot on. The story progression has to be at least mildly rational or you end up losing your audience (e.g. lack of immersion.)


(or said, if you are one of THOSE people when watching a movie)

Save me, jeebus. Yes! This! FFS, we're watching a film which involves listening to what they're saying unless it's a really old film and, even then, you don't want people shouting at persons on a screen who can't hear you, anyway. Plus, that lack of immersion thing again. I don't want to break my zone listening to you tell me what I can already see.

barrowdown replied the topic: #318011 13 Jan 2021 19:13
We enjoyed The Dungeon, but thought Monochrome, Inc. was step down in both story quality and a garbage central mechanism (the stupid elevator).

Have you played either of those? I'm curious if we would enjoy this one or if it would be even worse.

barrowdown wrote: We enjoyed The Dungeon, but thought Monochrome, Inc. was step down in both story quality and a garbage central mechanism (the stupid elevator).

Have you played either of those? I'm curious if we would enjoy this one or if it would be even worse.

No, this was the first one I played. But I honestly won't be seeking them out. I think I would rather stick with the Exit series.

Erik Twice replied the topic: #318015 14 Jan 2021 06:29
Adventure games is an extremely frustrating genre because it has been making the same exact mistakes for the last 40 years. The Unlock! games have brought back pixel hunting, doing mistakes to continue and all other bullshit Infocom was trying to shake off when writing text adventures.
Read More...