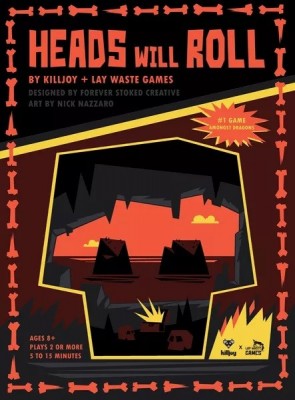 “TPK, Man, TPK!” the adventurer screamed as he rushed from the dragon's lair just seconds before dissolving into a fine ash. Only a steaming skull remains. “Hmmm” The dragon mused “Blackened. Is there a modifier on Blackened Skulls?”

“In days of Yore, according to Lore, after a battle, dragons were left yearning for more. So they derived a game of treasure and skulls, involving flicking and scoring, until reaching twenty plus one.” - A rhyme of olde not composed by Twenty One Pilots or Judas Priest.

There is just something about a game that can literally fit in your pocket. Heads will Roll is definitely one of those games and, bonus, no one will expect you to do any magic tricks if you pull it out instead of, say, a pack of cards. Instead, you get that moment of interest/concern when you place a handful of metal skulls on the table. 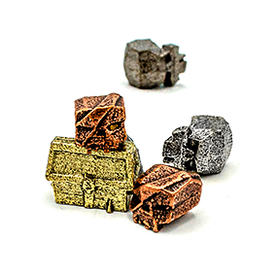 There is nothing more Metal than, well, thicc metal skulls. Two silver-colored skulls, two copper-colored skulls, One shield and one treasure chest. That is what you will be working with when playing Heads Will Roll. The rules, as with any good pub-type game, are simple: Roll all six pieces and then flick the shield into the gold treasure chest to earn/bank points. Flicking the shield between the matching Silver or Copper skulls can earn you extra flicks and extra points, assuming your final flick has your shield impacting with the gold treasure chest (and hitting nothing in-between).

This fistful of metal does have a certain heft to it and calibrating your rolling to get a good spread on the “dice” is part of the experience. Years of “Try to contain the dice to this small area of the table when rolling” will need to be overcome. A good skull spread will give you the room you need to show off your flicking prowess while trying to balance just how far you can flick with accuracy (to say nothing of the “You rolled into the chasm of doom/a.k.a. Off the edge of the table.)

The version that was sent to me for review was a mixture of old Dragoon: Heads will Roll pieces and some of the latest versions of the newer pieces. For consistency sake, I have included images of the updated skulls and shield in this review.

A wise man once said: If a job is worth doing, it's worth doing sitting down. (Okay, it was one of my stoner friends but hear me out.) For your consideration: The Lazy Susan 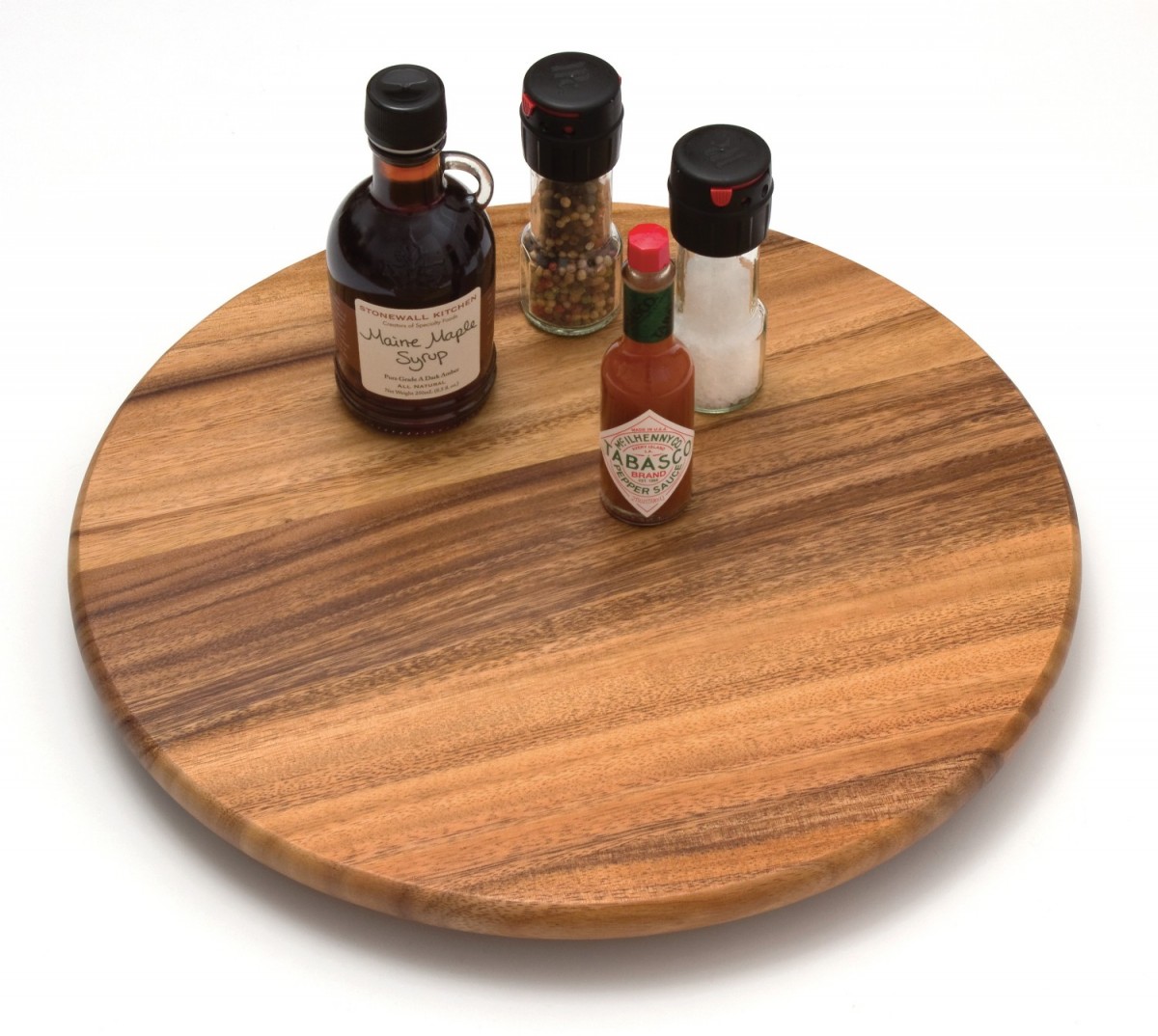 (Feel free to rebrand this as the rotating floor of doom, destruction and digestion). Some of the appeal of Heads Will Roll (especially in a bar setting) is moving around the table and trying to line up a great shot. However, at a certain point in my life, (I think it was my mid-thirties or anytime after 9:00 P.M Eastern Time), the appeal of moving around a table and hunching over it to do pretty much anything lost most of it's appeal. That is where a Lazy Susan comes in. Instead of moving around the table, the “table” moves for you. Lining up a shot is as easy as (slowly) spinning the lazy Susan to get the best possible angle. It also adds the limiting factor of a play surface that is, well, exactly the size of the Lazy Susan you decided to play with.

You can order Heads Will Roll with a playmat which, against all odds, does not feature a copper dragon dick punching a paint-brush mustachioed adventurer. Honestly, almost every table surface I have played on has worked out well, with the only exception being a “ribbed” Lazy Susan that was inexplicably built to keep condiments from sliding off instead of allowing shields to slide unimpeded.

The game gives a stern middle finger to luck mitigation. The highs are highs and the lows are lows: this isn't Prozac gaming, you'll come out of most of your turns with either fist pumping “Yes!” or sour grumblings of “Noooooooo!” The orientation of the skulls you rolled are also a modifier on the number of potential points you can earn. Simply passing between the silver skulls can earn you +2 points or +1 point for passing between the copper skulls. But if silver skulls are facing the same direction (say, both face-up or both resting on their sides) they are worth double points. So, it is possible to earn a stunning 7 points of the 21 needed to win the game by both being lucky with your roll and nimble with your flicker. “But, But, I banked a safe One or two points for the last 5 rounds and you thunder in and smash seven points in a single turn!?!” Well, if you just dust off family crest of this recently deceased explorer apparently “Who Dares Wins.” Or does that say “Deeds Not Words?”

If there is ever a category for “Late night/maybe slightly intoxicated/uproariously entertaining Titles” Matt Fantastic is a first-vote hall-of-famer. If you judge your games on laughter and being slightly ludicrous with extra portions of boasting and blowing it, heads will most definitely roll.

April 21, 2022
Rating
4.0
Heads Will Roll
If there is ever a category for “Late night/maybe slightly intoxicated/uproariously entertaining Titles” Matt Fantastic is a first-vote hall-of-famer. If you judge your games on laughter and being slightly ludicrous with extra portions of boasting and blowing it, heads will most definitely roll.
W
WadeMonnig Top 10 Reviewer 195 reviews

And I certainly have a lot of practice playing games with the bad kids at 2am...

ubarose wrote: This game is more fun than it has a right to be. So glad it is getting another printing.

It had permanent residence in our "rounding the night up" duct taped Yatzee box that's filled with waterproof cards and plenty of dice.

jason10mm replied the topic: #333156 20 May 2022 08:52
How damaging is this to the typical wood table? I feel like dropping angular metal pieces on the standard wood kitchen table would leave a lot of tiny dents, making the mat more of a necessity than an option lest the she-dragon of the house start rolling heads for reals.

jason10mm wrote: How damaging is this to the typical wood table? I feel like dropping angular metal pieces on the standard wood kitchen table would leave a lot of tiny dents, making the mat more of a necessity than an option lest the she-dragon of the house start rolling heads for reals.

No real impact on our dining room table and I'm pretty sure the wife would have noted it. But we pretty much play exclusively on a lazy susan now.

jason10mm wrote: Assuming it is even available, are the gold skull add-ons worth it? I'm entranced and trying to track a copy down but not sure which version to get.

I'd say to check out the kickstarter page for the most up to date info. They have done some changes to the sculps of the skulls, so I can't really comment on what the finals will be like. I think the KS is shipping soon-ish, so it should be pretty easy to pick up. I'll reach out to Matt about stopping by this thread and answering.

1. If you play hard on a delicate table you could fuck it up, but generally speaking it is pretty chill on the surfaces. I personally still prefer no playmat but I'm the only one of the team who does. But you also can't fit a playmat in your pocket.

2. If you have it or can buy it now it's the original edition (the new edition dropped the "Dragoon" from the name among other things) but there are a few very minor variations across the few printings it got.

3. I would wait for the new version to come out if you're only going to buy it once. The original runs are done using all existing Dragoon pieces, and for the new one we changed it up and made some pieces specifically for HWR. The shield is especially better for flicking.

4. New edition will still be a minute till it's out. We're supposed to have another round of metal samples in hand in a few days. I'm being sort of a dick about them having the right size and feel so it's been taking a little longer than hoped, but if these are good then everything else is done and it's on to full mass production and then getting them here.

5. Gold skulls are cool and open up some additional variants and ways to play. Totally not needed, and it is a duplicate sculpt, but I especially like some of the weirder stuff you can do with them. HWR "minigolf" is particularly fun and different. I don't actually know how many of the deluxe KS versions are getting printed, but there will be extras I'm sure and they'll be available direct at least.
Read More...