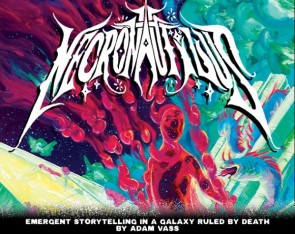 Here’s the lysergic pitch for Necronautilus, a new role-playing game from Adam Vass and his World Champ Gaming Co. You are a disembodied soul manifested as a cloud of gas travelling as the crew of a Nautiloid spacecraft in a dimension of capital D Death. You can only remember one thing at the outset – the reason that you became a Death Agent, a sort of explorer or policer or bounty hunter working for  Death itself. Along the way your missions might include cataloging unknown planets and cultures that have emerged in this “post-life” universe or rounding up entities that think they ain’t gotta die like everything else. You don’t carry around a backpack of equipment, you manifest items as an extension fo yourself. You don’t have stats, skills or spells. The key mechanism is that you have Words of Power that you can use to do things gaining new words is tantamount to levelling or character growth. 2D6 rolls are against the value of these words, with “exceptional success” occurring when you match the word’s value. This kind of critical success also causes a Word of Power to fragment, requiring you to drop at least one letter and reassemble the remaining into new Words of Power.

The amazing thing about it all is that these Words of Power take on different meanings, interpretations, spellings, or signification based on what a player does with them– it is all about subjectivity and generating a bespoke semiology at the gaming table. What does “graceful” or “snowfall” or “dethroned” mean to your character, what does it say about them and how do you use these words to interact with extradimensional beings, solve mundane problems, or overcome existential challenges? What does it mean when these words fracture into “careful”, “fallow” or “thorned”? And then, how do these things speak to the memories you might uncover as you play?

Then there is the issue of those memories and re-acquiring them. You only remember why you became a Death Agent at the outset. But maybe you recollect something that might help in a specific situation. You explain how this memory applies and roll 2d6 – if you succeed on the roll-under, you gain Life. Or you might fail spectacularly, increasing the memory’s value because you’ve learned more about it for next time. These recollections engage the player in a kind of deep, at the table character creation that goes far beyond the Tiefling Warlock player handing the DM a 50 page backstory about how their parents died. I’m reminded somewhat of Blades in the Dark’s generative flashbacks. If your Death Agent hits 30 life, there’s a kind of ascended state where your character re-manifests their identity.

On the subject of manifestation, that is also how this game handles material things. There is no item list. You can create anything within reason and within the GM’s discretion. There are some limitations - for example, you can only do this five times per visit to a planet and it’s pretty bad news if you create something from yourself and leave it behind. Yeah, there is combat but it as well as any other objective handled with clock mechanics, another reference here to Blades in the Dark. There are rules for travelling in your Nautilus – space exploration, planet generation, and random tables to make unique monsters, cultures, and missions. The level of abstraction is wise given the sky-high ambition of this design.

The scope of this game is mindboggling beyond the rules.  It’s a game about language and communication that actually uses word jumbles as a mechanism, but more significantly it’s about the subjectivity of what things mean, of how things exist. At the surface, it’s really a planet-hopping adventure game that isn’t really terribly unique from a distance, but it also digs in deep to profound concepts like how memories define who we are. It’s about what experiences actually mean to us and how they shape our character. It’s about the inevitable tyranny of Death and the notion of a post-life existence where shapes and forms are virtually limitless. And it’s about the power of our imaginations to maneuver and manipulate matter as well as spirit.

After I read through this book, I set it aside and just stared at the psychedelic cover. It felt dangerous and wild. I felt challenged by it and as a GM, it’s an understatement to say that it left me amazed and bewildered. I think those of us who run games read books and have ideas of how our groups will play, about how we’ll run the games, and we arrive at an ideation of play. We might come away with ideas spiraling out of our heads for storylines, scenarios, locations, characters, or concepts to explore. But with Necronautilus, I was absolutely overwhelmed with the possibilities this book opened up for me. Yet it also left me wondering if I have the GM chops to pull off anything that would do Mr. Vass’ work justice. I put this rulebook down thinking “how in the world am I going to run this” despite some decent examples of play and some pre-gen planets with suggested missions provided in the book.

This is a demanding game both for the players as well as the GM.  It requires a huge amount of buy-in on the part of the players, who must be willing to engage in the game’s surrealism and far-reaching ambition and it needs a GM that will make the most of the focus on subjective meanings. Stepping back a few feet, none of this is really that much different than what goes in other more mundane RPGs. But in Necronautlius, the safety net of familiar fantasy and idealization isn’t there. It leans heavily into the OSR notion that the character emerges through play, not through chargen rules and detailed histories. But that development in Necronautilius comes from generating meanings and determining values, from establishing contexts and precedents.

It’s beautiful and daunting. I love this game for that. I love that reading this book feels like boundaries are being torn open and beyond them is that infinite “post-life” universe where anything is possible. Necronautilus is all raw potential and progressive energy, but manifesting it is an alchemical process that requires players and a GM who are fearless and willing to explore themes, concepts, and ideas that are quite unexplored in the games medium.  This game is not a fantasy world of idealized selves and comforting tropes - it is a frontier of imagined memories, where words are devices, and where Death can mean liberation.

I got mine last week. Set it aside and later that evening, plopped through the early pages as I wait for Doom Eternal to load. I ended up reading the entire thing right there.

The setting and mechanics sound Out There when somebody relays them to you, but Adam Vass is to be applauded for how he weaves explaining this completely crazy setting and these incredible mechanics. It should be a mess, but it isn't.

There's literally a cool idea with every flip of the page, many of which caused me to stop reading momentarily and really take the time to soak in just how brilliant they really are You lose your character when they reach maximum HP and come back to life, ARE YOU FUCKING KIDDING ME?!?!? The shattering of Words, adding affixes to Words when you fail to use them, the games refusal to allow backstory at character creation, the goddamned skull character sheet... This book positively crackles with electric, infectious inventiveness, and you know, it still sounds FUN.

This is absolutely deserving of the 5 stars Michael is giving it. A week and 2 read throughs later and I am still coming down from it. What an incredible piece of work.

Jexik replied the topic: #318282 22 Jan 2021 13:17
Sounds wild, don't see myself playing it anytime soon. Using Jumble as a game mechanic sounds more fun than that one that used Jenga or whatever to build up a sense of dread.

James, currently playing a Fallen Aasimar Warlock with dead parents. Backstory was less than a page though.

Andi Lennon replied the topic: #318290 22 Jan 2021 17:29
This one has been lurking with intent on my bedside table since arrival and I can't wait to dig into it as it seems as unique and ambitious as it is beautiful. For a language nerd like me, the linguistic shard play sounds utterly inspired.

Worth subscribing to.
Read More...