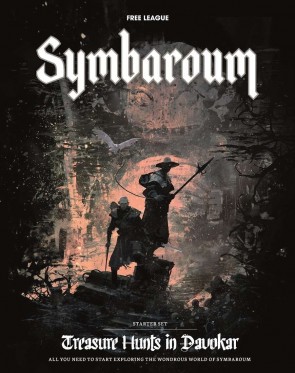 If you go down in the woods today, Make sure your license isn't expired!

It gives me great pleasure that Free League has been putting out old school starter boxes of their beautiful and generally pretty great role-playing titles. Not only is it nostalgic for someone like me who grew up in the 80s picking up classics like the Red Box with “everything you need to play” including dice, it’s also a great way to showcase the best the game has to offer without requiring a deep commitment up front. There’s an air of promise and potential with an RPG box set, and their latest is a precis of Symbaroum, a game I’ve been wanting to check out for a while.

The package comes with a starter rulebook, a setting and adventure book, a double-sided map, five pregens, and those all-important dice (a basic marble green 7 poly set). This is one of Free League’s longest running and more expansive lines with 8 hardcovers , so I especially appreciate the starter product in this case.  This also means that to some degree this is a more tightly edited and exclusionary package than, for example, last year’s Alien starter which was only drawing on a sole core rulebook. There is definitely a feeling throughout that you’re missing bits and pieces – for example, there are rules for Human, Goblin, and Ogre PCs but not Trolls, Undead, or Dwarves.

Of course it looks fucking great, thanks in no small part to Johan Nohr’s always incredible graphic design, and his fine work along with other illustrators and map-makers captures the mysterious, dark, and somber tone of the Symbaroum setting. It’s something like a halfway point between the balls-out black metalism of Mork Borg and classic Warhammer Fantasy but with an overall more serious tone. I’d also compare it to Soul Muppet’s Best Left Buried, itself a horror-influenced fantasy RPG with some loosely similar atmosphere.

Subtitled “Treasure Hunts in Davokar”, the set offers a fully detailed town, Thistlehold, as well as two great adventure sites (a spooky cemetary and a tower) complete with events, NPCs, and all the trimmings. It’s easy to run, well-written, and serves as a great intro to Symbaroum. One thing I really like about this game is that, like that subtitle suggests, it really is about treasure hunting in the massive, primeval Davokar Forest. It’s not so much save-the-world epic fantasy as it is a refinement of the traditional D&D impetus to stab monsters and take their treasure. Your PCs even have to buy a license to explore in Davokar, so that’s a thing. If I take only one thing out of this game, it’s that idea of having to have a license to go dungeoneering.

Davokar is a dark and corrupting place so that’s a thing too. Too much corruption can result in your character developing Stigmas or possibly even becoming an abomination. Yeah, you know that’s a classic taint of Chaos thing straight out of Warhammer. But it’s welcome here, and it adds a nice touch of horror, which I think is essential when the PCs are intended to be rapacious treasure hunters. It’s a great way for the GM to introduce a sense of creeping dread and imminent moral jeopardy. And body horror-like “modifications” to PCs are always a lot of fun.

Also fun are the exploration rules- they are simple and efficient, relying on succinct tables rather than counting torches and rations or relying on hexcrawl mechanisms. Out in the Davokar wilderness, failed Bushcraft tests might result in getting disoriented or suffering a misfortune. Or you might happen upon some ruins that you can explore, looking for Finds that could be either curiosities, mystical treasures, or artifacts. Or you might draw the attention of rival Treasure Hunters, Mare Cats, or Dragouls. The tone of expedition for riches is well presented and supported to an extent by these streamlined books, and I find that a simple goal at the outset such as “find treasure” can be very effective at motivating a party into what might be their first episode in a larger story. Or their last.

Systemically speaking, Symbaroum is one of the rare Free League games that isn’t Year Zero based. It is a roll-under D20 system with attribute or situational mods so it’s easy for anyone to pick up. The attributes are a little different than the basic six, we’re looking at Accurate, Cunning, Discreet, Persuasive, Quick, Resolute, Strong, and Vigilant with 80 points per character (or monster) divided between the eight metrics. So it’s somewhat more specific but I’m not quite sure if it’s really necessary to divide Dex or Str into two different numbers. There’s some nuance there for sure but coming from playing a system like Mork Borg or Knave with fewer stats it feels a little cumbersome. 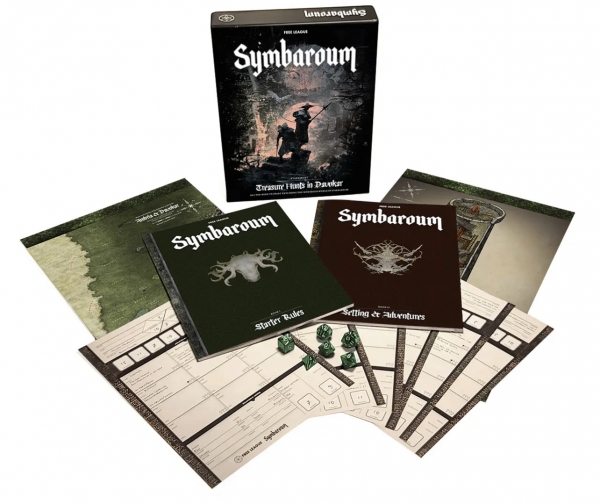 There are a few other notions to consider- secondary attributes that are a function of primary stats, a set of abilities (skills) with three levels of mastery, two schools of magic (Theurgy and Wizardry), and the usual variances introduced by ancestry or class. Combat is more or less what anyone who has played an RPG in the past 10 years would expect, but I do delight in that it is not a “death at 0hp” design. Bucking the OSR dogma, I don’t care for instant 0hp death. I like the drama of death saves and they are present here – death tests at 0 Toughness while the party Theurgist scrambles to stabilize their downed ally. Armor in this game is of the “phantom HP” variety so it soaks damage. The magic presented in the book is perfunctory and almost certainly more elaborated upon in other Symbaroum products, but there’s enough to go on here in this starter to elaborate on if you need more before getting into the rest of the product line.

None of Symbaroum, at least as far as the rules go, is particularly groundbreaking or innovative. But I’m noti too fussed about that because it’s a solid, simple foundation that offers a more robust chargen than the ultra rules-light fare out there but stopping well short of the morass of options available in some of the more popular RPGs. There is a nice balance of simplicity and detail throughout every facet of the rules, and I especially like that quality.

However, what gives me pause about Symbaroum is that the system is not the value here. I would go so far as to call it negligible- they are not essential in expressing the atmosphere here. Compared to Mork Borg’s daring, shredded down take on dark fantasy, it almost feels pedestrian. There are also recent titles like the previously mentioned Best Left Buried and Trophy Dark that approach similar material with more progressive rule sets. Even though it’s coming into a crowded field, I still think the real prize of Symbaroum is its setting, treasure hunting approach and visual design more than the rules. Interestingly, one of the next Symbaroum releases is an OGL setting book for use with 5E, but it remains to be seen how this world will interact with that game’s different priorities while also opening the setting up to a much larger audience with familiar rules. There’s a free preview of it up on DriveThruRpg if you are so inclined.

Did you enjoy reading this claptrap? Have you ever enjoyed anything I've ever written? Do you feel sorry for me because I don't get paid Tantrum House rates for my work here at ThereWillBe.Games? Consider tossing a dime into the hat over at my Ko-Fi page https://ko-fi.com/michaelbarnes.. A copy of this game was provided by the publisher for the review and we appreciate the support!

April 02, 2021
Rating
3.0
Symbaroum- Treasure Hunts in Davokar Starter Set
A solid game that makes up for a lack of innovation with a great setting and an awesome look.
MB
Michael Barnes Top 10 Reviewer 137 reviews

Also I think you need to adopt the dead-eyed smile of a weird christian cult if you wanna make tantrum house money.

dysjunct replied the topic: #321841 09 Apr 2021 08:49
You probably know this, Barnes, but TROPHY DARK was created in large part because the designer loved the setting and themes of SYMBAROUM but didn’t care for the crunchy system.

jason10mm replied the topic: #321899 11 Apr 2021 09:19
Using licenses (presumably the 'richer' the area, the more expensive the license) is a great way to subtly level gate adventures. And it drives some of the need to get money in the first place, something very lacking in most of the 5e stuff I've read/played, where cash is basically worthless because there are few magic items, hirelings, or strongholds to buy and maintain and money isn't linked to xp or levelling up costs. That serves their "story first, second, and third" approach with 5e but I miss the mercenary angle.
Read More...