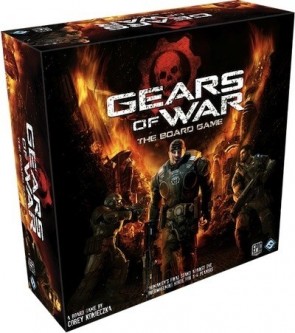 Nothing says nurturing a brown-hued bromance behind waist-high walls like Barnestorming #22.

Coinciding with the release of Gears of War 3, this week’s Cracked LCD is my review of Corey Konieszcka’s Gears of War: The Board Game. It’s the best game Fantasy Flight has done in quite some time, and for Corey’s part I think it’s a far more editorial and streamlined design than I’ve come to expect from him. It’s a great tactical miniatures combat system that I hope turns up in other games, because frankly the Gears setting is the weakest thing about the package. But just like the video game, the awesome mechanics and gameplay make up for the crap setting and narrative. If 2nd Edition Descent runs on this area-based chassis, it could be worth checking out. How that for “unmitigated hatred toward FFG” or whatever it is Christian accused me of?

I’ve also been playing Elder Sign off and on, mostly solo with varying numbers of investigators. It’s OK. Folks that are saying that it captures the feel of Arkham Horror are full of it, this is an ultra-mechanical, ultra-abstract game with no narrative or story context to speak of. Seriously, only the flavor text and artwork make this an Arkham Horror game. But it is a decent dice game, even though it does seem to be ridiculously easy to win most of the time. Something about the balance is really messed up.

The Summoner Wars Master Set is making the rounds. Colby Dauch and the fine folks at Plaid Hat Games sent me a copy that ironically ships from a distribution center about 20 minutes from where I live. Folks, this thing is _awesome_. If you’ve been thinking about Summoner Wars and want to go all in on it, this is your shot. It’s a dynamite package, a tremendous value, and it’s got six all-new factions, which doubles what was already available. My only complaint is that the board isn’t quite as nice as the standalone boards they were selling (which I have two of already). This is one of the best releases of the year, and it’s one of the best games of recent times.

Gears of War 3, duh. Single player is mostly terrible. The campaign is not grabbing me at all, and the writing is more awful than before. The Locust are boring bad guys, but the Lambent and their ridiculous monster-spawning stalks are even worse. But the gameplay and mechanics are still great, and the multiplayer is better than ever before.

I’ve got reviews in the hopper for Bit.Trip.Saga on the 3DS (good) and Burnout: Crash on XBLA/PSN (fucking horrendous).

FIFA 12 next week, lots of F:ATties will be diving into that. I’m actually going PS3 on it though, I like that controller better for footie.

Picked up Temple Run for free, it’s worth a look. It’s an endless runner, but it’s a 3D, third person one. I wouldn’t have bought it, but I got fifteen or twenty minutes worth of fun out of it.

I might download Another World since it hit the App Store last night. I dunno, KoDP is still kind of my go-to game. My wife wanted to watch The Social Network so I saw about thirty minutes of it. I couldn’t stand it. A film about kinds of people that I don’t like and a service I barely use or care about. I’d be more interested in a film about the invention of the telephone.

So it’s more Doctor Who. I watched the full Eccleston run over the week and man, it sucked. I did really like “The Empty Child” and “The Doctor Dances”, those were great shows with cool storylines, a good mystery, and great atmosphere. But I thought the rest were terrible. Very awkwardly written with lame “we’re so dark” crap mixed in with really goofy, unfunny humour. And Eccleston just doesn’t seem to be channeling anything close to the Doctor (however ephemeral that concept is).

I really didn’t like the handoff to Tennant either. It was abrupt, forced, and again, awkward.

The Dalek god was kind of cool, but that whole business was so overdone and obnoxious.

So now I’m going through the Tennant stuff I haven’t watched yet, more or less in order, to catch up with the Matt Smith season. Yay.

I’ve been listening to a couple of so-called “witch house” bands over the past week, these sort of underground laptop-oriented acts that are taking a mixture of nasty, crunchy synths, bitcrushed/distorted southern rapping (!!!) and chopped-and-screwed beats, 4AD ethereal vocals, and mixing it all up with a sort of urban gothic atmosphere. Very horror-oriented and spooky, a lot of it isn’t very dancey as the house tag would lead you to believe. But some of it is definitely club material. But the atmosphere, attitude, and kvltish attitude is really reminiscent of black metal in some ways. It’s really, really interesting stuff- particularly since the genre is at a stage where it’s really loose and rather ill-defined- it’s also called “Drag” in some quarters. But you’ve got groups like Salem, that are doing this sort of drugged out more hip-hop (?) oriented thing but then others like //Tense// that sound just like something on Wax Trax circa 1986. This stuff is also definitely indebted to stuff like Cabaret Voltaire, Psychic TV, and experimental industrial. But then in some bands' tracks (like Pictureplane) they do stuff like have these really fragmented scraps of pure 1990s pop or house music.

Probably the best starter for the interested in a compilation called “Isvolt” that features a lot of what appear to be the major players in the scene. The best acts that I’ve heard so far are on it- F8stercare, oOoOO (how's that for a band name?), Mater Suspiria Vision, and White Ring. Some of these young, up and coming superstars have intentionally “ungoogleable” names or unpronounceable names, which makes it kind of frustrating. Ultra-limited edition releases, weird band names, satanic/dark/occult imagery, lo-fi noise...see, black metal-ish.

There’s also a split 7” with ooOoOo and White Ring that’s really awesome. Just two tracks, but if you’re interested in a quick shot of what this stuff sounds like it’s a good start. They’re also a little more accessible than some of the other stuff. White Ring also has a pretty great LP called “Black Earth That Made Me” that I’d highly recommend.

Mater Suspiria Vision is good too, they’ve even got a video tribute to italo horror director Ricardo Freda. How can you go wrong with a record called “Seduction of the Armageddon Witches”? They're a little more traditional techno in some ways, particularly their remixes.

Salem's record is interesting...it's more hip hop than the others, but slowed down and bombed out on amphetamines or something.

Next week- probably the Ikusa review and my full take on Gears 3.

Discuss this article
Log in to comment
Posts in discussion: Barnestorming #22- Gears of War in Review, Daleks, Witch House