Descent: Journeys in the Dark Second Edition: The Trollfens Expansion 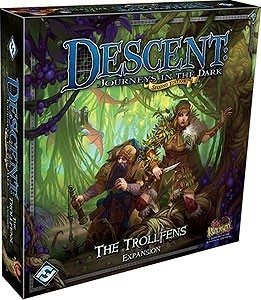 The terrifying Bol’Goreth rampages through the wilderness at the edge of the Valdari Marsh, and those left in his wake babble terrifying tales of destruction. However, dark rumors int at something far more powerful controlling the savage giant. Do you dare face the troll’s wrath to discover his true purpose?

In June, Fantasy Flight Games announced In The Trollfens, an expansion for Descent: Journeys in the Dark Second Edition, heroes will venture deep into the wilderness of the Valdari Marsh, where they’ll encounter the vicious troll Bol’Goreth. But there’s more to this foe than simple-minded brutality, and the heroes must work to discover the sinister truth before Bol’Goreth’s evil spills out across the realm.

Like last year’s Lair of the Wyrm, The Trollfens is a “small box” expansion that contains (among many other additions) five all-new quests. These can be played as their own standalone mini-campaign, or used as side quests to supplement a larger campaign. When used to supplement a main campaign (like “The Shadow Rune” from the base game), the quests from The Trollfens are introduced into play via Rumor cards. Essentially, these Rumor cards represent dark whisperings of trouble in the Valdari Marsh, and they provide a motivation for the heroes to make a detour from their main campaign.

At the start of the campaign, the overlord draws three Rumor cards, then has the option to play them during the campaign phase to entice the heroes away from their current storyline. If the overlord plays the Rumor card entitled “Ghost Town,” for example, then the heroes will hear passing travelers speak of ill tidings near the edge of the Valdari Marsh, and they may choose to investigate. This means that after the overlord plays “Ghost Town,” the quest of the same name becomes an option during Act I quest selection. What’s more, that quest serves as an entry point to a short narrative that runs parallel to the main campaign.

For those familiar with last year’s Lair of the Wyrm, the concept of Rumor cards and their related side quests is nothing new. In The Trollfens, however, players will find that the quests themselves offer a compelling new level of complexity. Generally speaking, quest maps in The Trollfens (particularly the Act II quests) are slightly larger than those seen in previous expansions. Additionally, each quest’s “Rewards” section offers an incentive for partial success. In other words, you can fail the main objective of a quest in The Trollfens, but still perform well enough to walk away with valuable resources!

Let’s return to our example from above, “Ghost Town.” In this particular quest, the heroes have trekked through the marsh to find what they hope is a small but peaceful settlement. They are soon horrified to learn that the town lies in ruin, with slain villagers scattered about and structures torn apart or ablaze. Flesh moulders, harpies (one of The Trollfens’ new monsters), and other minions of evil have laid waste to the secluded town, and the heroes must now repel them and learn what they can.

Unfortunately, the vile flesh moulders have other plans. Eight slain villagers, represented by objective tokens, are scattered across the map. If the heroes get to them first, they can search the bodies for clues (and valuables). If, on the other hand, the flesh moulders are allowed to desecrate the villagers’ remains, they will create horrible undead abominations! For the heroes, the race is on to claim as many objective tokens as possible, and in doing so, to prevent the overlord from defiling the corpses of his innocent victims. The plot thickens, however, when the heroes hear the screams of a lone survivor coming from the edge of town. Suddenly, their priorities shift; rather than protecting the dead, they must protect the living!

As mentioned earlier, each quest in The Trollfens offers rewards based on partial success, presenting a departure from the all-or-nothing nature of past quests. In this case, whichever side wins the overall quest (by rescuing or defeating the lone survivor, as the case may be) will receive a powerful magic ring. However, succeeding at the quest’s other objective (claiming slain villagers) brings its own rewards. While the heroes receive twenty-five gold for each villager they search, the overlord gains valuable insight into blood magic for each corpse he corrupts. If his flesh moulders can defile at least four slain villagers, the overlord receives the “Secrets of Flesh” Overlord card! With similar tiered rewards throughout The Trollfens’ included quests, there’s always a reason to stay in the fight.