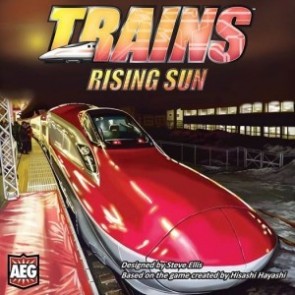 Welcome Aboard, Again! Trains returns with all-new cards and strategies for you to build the best rail system in Japan. Trains: Rising Sun not only features all new cards, it includes three entirely new boards. Two of the boards are designed specifically for 2 - player games, while the Nagoya map is a new challenge for 2 to 4 players. This standalone game can mix easily with the original Trains game for even greater replay possibilities! Trains: Rising Sun also introduces Route Bonus Cards, allowing you to score additional points for being the first to connect specific stations. Route Bonus Cards are included for the original Trains game as well!

The railways of today are amazing things and bullet trains, freight trains and more keep entire countries running. From transporting the populace to carrying essential materials, trains play an integral part in a nation's power and economic development. You will start with a small set of cards, but by building a more effective deck throughout the game, you will be able to place stations and lay rails over the maps of Japan. Gain enough points from your railways and you will ultimately manage the most powerful railroads in modern Japan!