War of the Ring 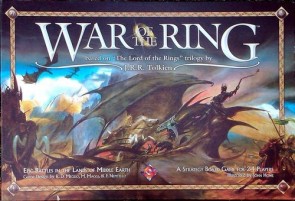 In War of the Ring, one player takes control of the Free Peoples (good guys), the other player controls Shadow Armies (bad guys).

Initially, the Free People Nations are reluctant to take arms against Sauron, so they must be attacked by Sauron or persuaded by Gandalf or other Companions, before they start to fight properly: this is represented by the Political Track, which shows if a Nation is ready to fight in the War of the Ring or not.

The game can be won by a military victory, if Sauron conquers a certain number of Free People cities and strongholds or viceversa. But the true hope of the Free Peoples lies with the quest of the Ringbearer: while the armies clash across Middle Earth, the Fellowship of the Ring is trying to get secretly to Mount Doom to destroy the One Ring. Sauron is not aware of the real intention of his enemies but is looking across Middle Earth for the precious Ring, so that the Fellowship is going to face numerous dangers, represented by the rules of The Hunt for the Ring. But the Companions can spur the Free Peoples to the fight against Sauron, so the Free People player must balance the need to protect the Ringbearer from harm, against the attempt to raise a proper defense against the armies of the Shadow, so that they do not overrun Middle Earth before the Ringbearer completes his quest.

Each game turn revolves around the roll of Action Dice: each die corresponds to an action that a player can do during a turn. Depending on the face rolled on each die, different actions are possible (moving armies, characters, recruiting troops, advancing a Political Track).

Action dice can also be used to draw or play Event Cards. Event Cards are played to represent specific events from the story (or events which could possibly have happened) which cannot be portrayed through normal gameplay. Each Event Card can also create an unexpected turn in the game, allowing special actions or altering the course of a battle.

Top heavy, but worthwhile
August 01, 2008
Rating
5.0
Very complex, very fiddly and slightly unbalanced but good nevertheless! A great game that manages the rare feat of being both highly thematic and tactically rich with many options to explore in search of the win. Although very definitely not a card-driven wargame it has a similar feel thanks to the way your choices are limited by the action dice results, much like the way they're limited in a CDG according to your hand of cards. Multiplayer game can be interesting, but I do wish someone would come up with a non-team variant.
MT
Matt Thrower #1 Reviewer 286 reviews
Comments (0) |

5 stars
(5)
4 stars
(1)
3 stars
(0)
2 stars
(0)
1 star
(0)
Rating
4.8
Already have an account? Log in now or Create an account
View all reviews
It's one of those games that makes you say, "Wow..
August 20, 2008
Rating
5.0
If there's a game that betters War of the Ring in terms of delivering a fantastic, nail-biting experience while expertly balancing narrative and strategic gameplay, I haven't tried it. Many strategy games tend to make concessions when it comes to theme to ensure the mechanics are accessible to new players, or the thematic elements are only pin-on dressings with just a tenuous attachment to what the player is actually doing. Not so, here. This game drops the players right in the middle of a warring Middle Earth. The players are first and foremost competing for victory, but every single action taken towards this goal compound to create an exciting and engaging alternate telling of the Lord of the Rings epic. When playing, I keep switching between grinning like a kid because of the cool situations that are unfolding and scratching my head trying to decide what would be the best course of action.

There are some nitpicks about the production quality that can be made (small text on the event cards, awkward board for handling so many pieces, overly esoteric and subtle symbols to differentiate regions and nationalities) but, really, these don't detract from my enjoyment of the game one iota as these problems are greatly outweighed by what this gorgeous production does right.
B
bfkiller Top 50 Reviewer 14 reviews
Comments (0) | Was this review helpful to you? 1 0
The Ultimate Lord of the Rings game
July 28, 2008 (Updated: July 28, 2008)
Rating
5.0
Awesome game. Excellent bits and board, very immersive. My favorite 2-player game and favorite AT game. A must have for Lord of the Rings fans. If you want an epic Lord of the Rings gaming experience, this game cannot be beat.

The theme is very well implemented in this game. Both players must allocate their actions between the fellowship of the ring (either finding them or getting them to Mordor) and the War between the Free Peoples and the Shadow. Each nation has their own miniatures and the cards do a very good job of reenacting situations (or possible situations) from the books. The action dice are a cool part of the game that can force you to alter your strategy a bit, but still gives you a ton of choices.

I love the full game, but also enjoy a variant on the intro game I made that cuts out the cards (thus, cutting play time in half) and is more balanced than the original (broken) quick-play rules.
A
Aarontu Top 50 Reviewer 25 reviews
Comments (0) | Was this review helpful to you? 0 0
One Game to Rule them all
July 28, 2008
Rating
5.0
This game begins to rival the Mighty Dune in its ability to capture the feel of the book it was based on. War of the Ring is a wonderful 2 player war game, complete with tons of plastic mini's and well produced bits.

One of am favorite 2 player games, playable in about 4 - 5 hours and rather simple to teach. This one is made better with the expansion, but works very well out of the box.
M
Malloc Top 100 Reviewer 2 reviews
Comments (0) | Was this review helpful to you? 0 0
Fantastic game, one of the very best
July 29, 2008
Rating
5.0
What more can be said about War of the Ring? A game that is daringly old school, that perfectly straddles the line between Ameritrash and war game, that squeezes ten tons of theme inside a tightly packed box...


It's the kind of game that makes you grateful that you're a gamer.


My full review on BGG has all the details. This is a game that deserves to be in print for years to come, and should it ever fall out of print it will be one that will still be highly sought after.
KB
Ken B. Top 10 Reviewer 83 reviews
Comments (0) | Was this review helpful to you? 0 0
Masterpiece
July 29, 2008 (Updated: July 29, 2008)
Rating
5.0
A masterpiece of boardgames. It captures the epic saga of Lord of the Rings perfectly with a board, cards, and ton of plastic miniatures. Like lots of my favorite 2 player games, the 2 sides play very differently. Painting the bases of the minis isn't required but helps a lot. The rulebook is a bit muddled but take the time to work your way through it. It's much easier to play the rules than to read them, and the initial effort is well worth it.
DD
dan daly Top 100 Reviewer 5 reviews
Comments (0) | Was this review helpful to you? 0 0
View all user reviews
Discuss this article
Log in to comment
Posts in discussion: War of the Ring

Codenames
5.0
L Legomancer
"I'm not much for party-type games, and when people described..."