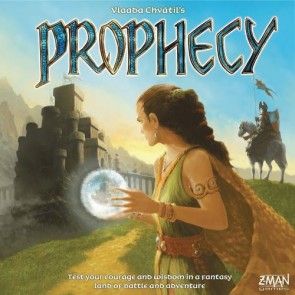 "Three times over three centuries people and the land will suffer for the sins of the powerful before the hero of royal blood appears, dressed in the armor of the ancient rulers, and settle down on the kings' throne to stop the anarchy and chaos..."

This is what drives the 10 characters in the world of PROPHECY. A fantasy world full of adventure, where you will battle creatures and other characters in different terrain, increase your skills and learn spells at the five Guilds, acquire Items of a common and rare nature in the civilized spaces (or as rewards for defeating creatures). And the goal: to possess 4 out of 5 ancient Artifacts that are guarded in the Astral Planes by terryifying creatures. Only then will you show the world that you are their rightful king! The game was originally produced in the Czech Republic, but our edition, with the help of the designer and at the behest of several gamers, speeds up the game, has a graphic redesign, changed card text and a new Final Battle rule (the original Final Battle rule is now a variant).

5 stars
(1)
4 stars
(2)
3 stars
(0)
2 stars
(0)
1 star
(0)
Rating
4.2
Already have an account? Log in now or Create an account
Talisman's Fussy Shadow
September 25, 2019
Rating
3.5
I like the general feel of this fantasy world, as well as the breadth of choice on your turn; however—and this was agreed to by all present—the game was fussy and cramped compared to Talisman. Several players wished out loud that we were playing Talisman instead, as it seems to move more quickly and can support more players with less downtime.
H
HiveGod Top 50 Reviewer 54 reviews
Comments (0) | Was this review helpful to you? 1 0
Waxing Prophetic
August 15, 2008
Rating
5.0
A couple of years ago I was really obsessed with playing Talisman. I was looking for a simpler adventure game than Descent and Talisman looked like it was it. Unfortunately Talisman was out of print and I really didn't want to pay $100 for a used board game. Then I heard about Prophecy.

I ordered it (the Altar edition, I was a true Prophecy pioneer) and it was a hit. I like it's goofy artwork and the glass beads (I think the Z-Man version has cubes?) and the board is a very stunning, abstract map. My only problem are the flimsy cards, but I think the Z-Man version may have fixed that. Oh, another great thing are the character stands! The plastic bases are the best out of any game, hands down.

Game play is essentially Talisman, but better. You have two stats Strength and Willpower which are connected to Health and Magic respectively; get wounded and your current strength is down until you heal. When you spend magic on spells or to initiate battle of wills, then you have less Willpower in those battles. Battles resolve just like Talisman, add your modifiers and see if you get the higher roll than the encounter.

You also get a lot more freedom in movement. A lot. You can always move one space to either side of you for free, pay 1 gold to ride a horse two spaces either way, spend gold to go port to port or travel via magic gates. Also there are plenty of skills that affect movement.

As for skills, each character is a member of two guilds from which they spend experience to gains skills. Any character, however, can have skills from any guild. You just have to pay gold AND experience to get the skills.

The winner is the first person to gain 3 of the 5 artifacts protected in the Outer Planes spaces guarded by a lesser and greater guardian each. If all of the guardians have been defeated, but no player has 3 artifacts it becomes a PvP game. Well, you can still do PvP all throughout the game, but there's little reason to do so.

Prophecy is a simple adventure game, but it does adventuring right. The game can tend to drag on a little long sometimes, so we'll either play with some quick start rules (characters get an item and a skill to start with) or play winner is first to get 1 artifact, or 2 artifacts or whatever.

Currently, I'm a little bored with Prophecy, so I'd really like to give it a 4.5 stars. I really want those expansions to come out and give Prophecy a breath of fresh air.
M
metalface13 Top 50 Reviewer 16 reviews
Comments (0) | Was this review helpful to you? 0 0
fun, short fantasy adventure game
June 02, 2009
Rating
4.0
I think Prophecy it's a great, short fantasy adventure game. If you've played others in this genre you probably don't need another, but still you will want to get this because it's good, plays in about 2 hours and has a great upgrading and specializing system.

Plus the board is easily travelled trough and the movement is very easy so you'll be in no time where you want to , not wasting turns and turns wishing to get a roll like in some other games.

I am a bit concerned for it's replayability, however the new expansions should deal with that.
J
joseaguerof Top 50 Reviewer 19 reviews
Comments (0) | Was this review helpful to you? 0 0
Discuss this article
Log in to comment
Posts in discussion: Prophecy

Codenames
4.0
H HiveGod
"Players are low-level wetwork operatives who have only moments to..."