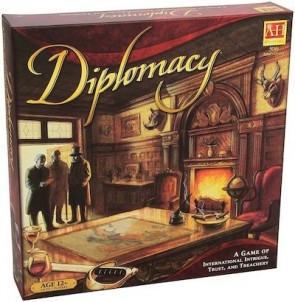 At the turn of the 20th century, prior to World War I, the seven great European powers engage in an intricate struggle for supremacy.

Military forces invade and withdraw, shifting borders and altering empires with subtle maneuvers and daring gambits. Alliances are formed and trust is betrayed as players negotiate and outwit one another in a delicate balance of cooperation and competition to gain dominance of the continent. Diplomacy challenges players to rely on their own cunning and cleverness, not dice, to determine the outcome of this game of conspiracies and conquest. The game has new artistic treatment to it for the first time since print in 1999. Social interaction, interpersonal skills, and negotiation make up an essential part of the game play.

April 02, 2020
Rating
3.0
Utterly compelling. Shame about the play time. I've become convinced that PBEM offers other advantages than just solving the time problem - you can't be overseen chatting to your enemies enemy and it actually feels morel like a game of 1900's diplomatic communication when you can't see the people you're playing against.
MT
Matt Thrower #1 Reviewer 286 reviews
Comments (0) |
April 19, 2019 (Updated: April 19, 2019)
Rating
2.5
A groundbreaking game. But I prefer diplomatic games with more structure to the negotiation. Negotiation in Diplomacy is always, necessarily, on one dimension--army movements. I prefer other negotiation games where there are multiple mechanics/dimensions to bargain over.

I also feel that the stalemate points really are a big game mechanic flaw.

I don't play this much anymore, I feel it has been superseded. Still a classic game.
GS
Gary Sax Top 10 Reviewer 101 reviews
Comments (0) |

5 stars
(2)
4 stars
(3)
3 stars
(0)
2 stars
(1)
1 star
(1)
Rating
3.5
Already have an account? Log in now or Create an account
View all reviews
Diplomacy: This game rocks!
August 27, 2008
Rating
5.0
Diplomacy is the father of all negotiation games...with a little history to boot. Just a joy to play.
RB
Ryan B. Top 50 Reviewer 13 reviews
Comments (0) | Was this review helpful to you? 0 0
The ultimate negotiation game
November 20, 2008 (Updated: November 21, 2008)
Rating
5.0
Seven players take control of seven nations. You can move around your armies and fleets trying to take supply centers but if you really want to get anywhere, you're going to need to ally with someone.

And then if you really want to win, you're going to have to backstab that sucker so skillfully that they'll never recover.

This is a game of persuasion, a game of lying, a game of backstabbing. It also seems to be a game of reading everyone else's mind as you figure out who is trustworthy and who is a liar.

It's an amazing game but don't play it with whiners who get emotionally invested in the game. I've heard many reports of tears and boards being flipped after people getting backstabbed. I haven't seen it myself but I still suggest on choosing your players carefully. You don't want them to cry after you stick the knife in.
Q
quozl Top 500 Reviewer 1 reviews
Comments (0) | Was this review helpful to you? 0 0
good old game
August 25, 2008
Rating
4.0
Diplomacy is a refreshing change of pace from big dice filled games with a thousand different plastic bits. It is a euro game from before the term existed but it still lets you kill stuff.

There is nothing like pulling crazy back stabs in this game because that is pretty much what the whole game is about.
B
blarknob Top 100 Reviewer 4 reviews
Comments (0) | Was this review helpful to you? 0 0
Think friends betraying friends is fun? It isn't.
September 26, 2008
Rating
4.0
I'll admit that this is a good game on paper and I've heard tons of stories from friends who loved their experiences. Yet, I've tried this 2-3 times and I've HATED it everytime. I even won once and I still hated the experience.

One of the ways you know you have a fairly distant, cold and harsh board game is when it's actually better suited to be played by e-mail. That was my first hint that this is probably a game I should not play.

I know of no other game that illicits such strong reactions from people when it is suggested as the next game to play. Everything from groans to glee.

Overall on the good side, you have LOTS of player interactions, VERY challenging (to stay awake), obviously 100% skill-based (like selling a used car), and the rules are very easy.

However, on the weak side, combat is really weird, the different starting powers are CLEARLY not balanced, VERY repetitive and worst of all, WAY TOO LONG.