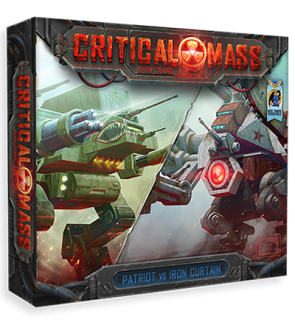 Critical Mass is a game of hardcore, heavy hitting Mech-on-Mech combat. As the pilot of a massive war machine, you must head out into th eirradiated wastes and destroy your opposition. Behind the control panel, you must carefully choose the card you play each turn to attack your opponent, defend against their weapons, perform special actions, or enhance your Mech.

Critical Mass is a fast-paced mech combat game. Players go head-to-head in this fighting-strategy game with deck-building aspects. Players choose their favorite mech to battle it out, with each mech offering a different loadout of cards to start the game and unique powers.

Each turn, players play a card face-down. When both players have chosen a card, they reveal them. Cards resolve based on their speed if they haven't been interrupted. Weapons deal damage and interrupt the enemy, while defending avoids weapon hits. Upgrading offers you additional cards to add to your arsenal but is vulnerable to being interrupted. Lastly, recharge reloads spent cards.

As cards are played, they go to their owner's cool-down pile, where they remain until they're reloaded. As players take damage, the armor on their mech is destroyed. When enough armor is destroyed, an armor core becomes vulnerable and can be destroyed to stun that mech for the next turn. The game ends when a mech's armor is completely destroyed down to the last core.