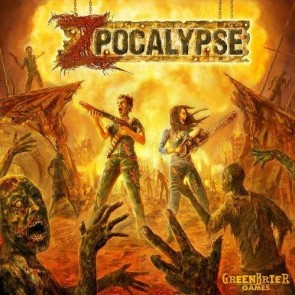 Zpocalypse is a survival board game set in a post-apocalyptic wasteland.

Two to four players start in a basement/fallout shelter which can lead out to several base locations or even through the tunnels to sewer grates throughout the transformable board. The survivors are trying to make it day to day in a world torn apart from the walking dead. As in any survival game, one needs food, guns, ammo, and more. Players go out into the wasteland and scavenge for supplies, or perhaps to find a new gun or melee weapon to fend off the next zombie attack. In addition to gathering supplies, each player forms and controls his own squad and each squad works to fortify the bases. Your walls and barbed wire would not hold the dead for long, however, and they are getting hungry. Characters receive victory points for killing zombies, building defenses, and successfully completing goals. Victory points show who is soldiering on the best in this wasteland. The final tally of points determines the winner. Victory points also act as experience points for leveling up a character. The game combines combat, tactics, resource collecting, character development, team play, and strategy towards the goal of surviving in the Zpocalypse!.