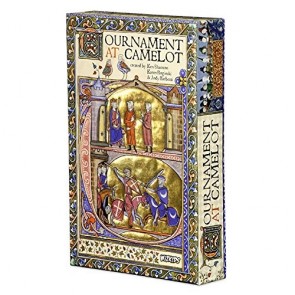 Game Name
Tournament at Camelot
Publisher
WizKids
MSRP $
24.99
Genre
Card Game - Non Collectable
WizKids
In the time of King Arthur, knights displayed their skill and prowess at tournaments held throughout the land. In Tournament at Camelot, you play as a legendary character (Protagonist), battling opponents with weapon cards—Arrows, Swords, Deception, Sorcery and even Alchemy. The more you injure your opponents, the better you fare in the tournament. However, even the most injured characters can make a complete comeback with the grace of Godsend cards and the aid of their special Companions.  This trick-taking game ends when one opponent has been injured to the point of death. The player with the most health is then declared the Tournament victor!
Tweet

Tournament at Camelot
April 19, 2019
Rating
4.5
A trick taking game that comes with asymmetrical powers and mitigates the luck of the draw with a thematic double tiered catch-up system all while framing it around a melee to the death. It's not only a mouthful, it can be a handful. Like a skillful juggler, Tournament at Camelot has a lot of plates in the air and, sometimes, it can break a few plates due to it's over ambitiousness. It is not that it is too complex, it is that the flow can be broken as more and more rule bending/breaking powers come into play. It features a Feint system that strategically pushes “tied” cards out of a match that can be used to focus your assaults on a player of your choice...assuming it doesn't backfire. Godsend cards and special companion powers that trigger as your hit points become low are the aforementioned catch-up mechanisms. When you put it all together, it provides an experience that makes you forget you are playing a trick taking game and not actually engaged in a Tournament of Arthurian proportions.

Cockroach Poker
4.0
N Nodens
"Can be played with anyone."