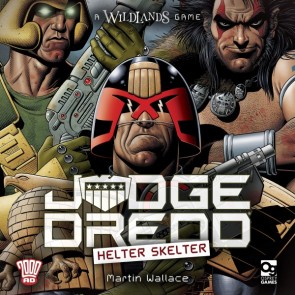 Something in the multiverse has shattered, and now the universe is bleeding. Throughout Mega-City One there are reports of invaders wreaking havoc. Celtic barbarians in Ezquerra Block. Russian nobles in Apetown. And rumors of fragments of other universes, waiting to be claimed.

Head to the streets of Mega-City One with Judge Dredd: Helter Skelter, a new miniatures board game combining Martin Wallace's critically-acclaimed Wildlands rules with the worlds of 2000 AD. Four unique factions bring iconic characters from Sláine, Nikolai Dante, and Strontium Dog crashing into Mega-City One, all intent on finding the shattered fragments of their own universe and crushing anyone who gets in their way.

Things are going to get rough, but one thing is certain. No matter what universe you are from, you still have to answer to the Law!

Preordered this this morning.

mezike replied the topic: #293734 13 Mar 2019 06:06
I enjoyed Wildlands but felt it was let down with some poor graphic design choices, not least of which was the difficulty in figuring out which mini went with which card. The use of licenced characters should improve this and I love that they are using some official 2000AD artists on the project. I hope that they go with quirky 2000AD and we get the likes of Max Normal and Walter and not just five identical looking Judges.

Filling out full teams for Nicolai Dante and Slaine is going to involve some barrel scraping though.

Edit: also, if they do a Dark Judges pack it will blow my mind. Screw collecting MacGuffins, I’ll be happy just stamping round MC1 roleplaying “you cannot kill what doessss not liiiivvve”

mezike wrote: Filling out full teams for Nicolai Dante and Slaine is going to involve some barrel scraping though.

Edit: also, if they do a Dark Judges pack it will blow my mind. Screw collecting MacGuffins, I’ll be happy just stamping round MC1 roleplaying “you cannot kill what doessss not liiiivvve”

I love Wildlands and I love Dredd, but I'm not convinced the two go together. Especially in a cross 2000ad IP with some made up nonsense about dimensional crystals.

I'd have been happier with the idea if it was a squad of Judges against some famous perp teams: the Angel Gang, Cal and some Kleggs etc. However appealing the Dark Judges are, I'm not convinced they'd work in a firefight skirmish game.

mezike replied the topic: #293743 13 Mar 2019 09:40
You are most likely correct. Helter Skelter isn’t exactly top-tier Dredd, just a conceit to allow them to stuff multiple licenced characters into one game. I’m still looking forward to how this all works. I’ve tried skirmish games with both Dredd and SD and neither felt like they did anything special with the licences so I’m still holding out for something with either a bit more narrative to it or simpler fun with pretty artwork.
Read More...

The Walking Dead: All Out War Core Set
4.5
E edulis
"I've been playing a lot of this solo during the..."