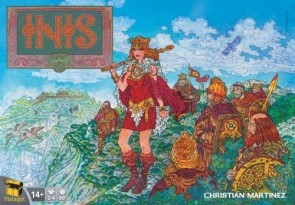 Long before St. Patrick arrived, even before the Romans glimpsed its shores, Ireland was a contested place. Peoples were lured there by its thick forests, bright green fields, and swift-flowing rivers. The battles, marriages, and quests of these peoples are remembered and brought alive in the board game Inis.

Designed by Christian Martinez and lavishly produced by Matagot, Inis a two-to-four player board game that immerses you in Ireland’s fierce heroes, enchanted objects, and beautiful mist-covered landscape. Your goal in Inis is to become Ireland’s first High King.

Inis invites you to experience the magnificent deeds of Irish myth as you explore the island's enchanted landscape and claim territory for your clans. The game's elegant mechanics combine card drafting and area control to produce a system rich in strategic options and interpersonal interactions. Brilliantly Crafted tiles give every game a unique, gradually unfolding geography, while original art brings Ireland's ancient epics and audacious heroes to life.

Ancient Ireland Comes Alive
April 19, 2019
Rating
5.0
Inis is absolutely perfect in its space. It lasts about an hour avoiding the major flaw of the genre where one player can feel effectively eliminated for too long. It hits every note I want hit in this type of game: funny, tactical, political, and just some real almost stand up moments.
M
MasonSokol Top 50 Reviewer 23 reviews
Comments (0) |
April 23, 2019
Rating
5.0
earlier this year was my first chance to experience Inis and, after purchasing the game, it has consistently hit the table over and over, always providing a thoroughly entertaining night. And you know what? My wife loves this game. Sure, she will grimace and endure playing Kemet and will quietly trounce me in Cyclades but she actually adores playing Inis. From casual to ultra-competitive, everyone I have introduced it to has enjoyed the experience.
W
WadeMonnig Top 10 Reviewer 195 reviews
Comments (0) |

Rating
4.0
Already have an account? Log in now or Create an account
April 20, 2019 (Updated: April 29, 2019)
Rating
4.0
Nexus Ops is the DOAM of choice for me; all others need to prove they're better than it and so far few have met the challenge. Fortunately for Inis, it's almost more like El Grande than Nexus Ops. It should be stated, though, that we were feeling our way around the game and probably weren't playing it as we would a second time. It's a nice, streamlined package.