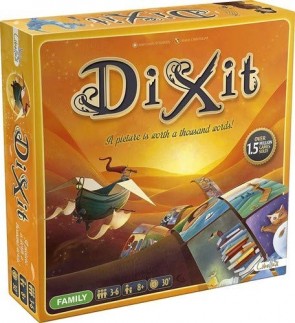 Dixit is the lovingly illustrated game of creative guesswork, where your imagination unlocks the tale. In this award-winning board game, players will use the beautiful imagery on their cards to bluff their opponents and guess which image matches the story. Guessing right is only half the battle – to really succeed, you’ll have to get your friends to decide that your card tells the story! Every turn, the storyteller will call out a short phrase or word to match the image on his card. Then each player will choose the card that most closely matches that phrase, and then everyone must guess which card the storyteller saw when he invented his brief tale. Correctly guess the storyteller’s card, and you’ll move ahead. Convince everyone else that your card is best, and you’ll do even better. Dixit is a wonderfully simple game, playable by nearly anyone with whom you share a common language. With a fantastic range of beautiful illustrations and rules that can be understood by children and adults alike, Dixit will appeal to anyone with an imagination. It’s no surprise that Dixit won the Spiel de Jahres award for game design in 2010. It is brilliant and simple, beautiful and imaginative, and fun for all.

Each player at his turn plays the storyteller.

He is given a single picture, while the other players get a hand of six pictures.

The storyteller says a sentence or a word connected to his picture, then each player chooses one of his pictures to bet upon.

All pictures are showed face up, and every player have to bet upon what picture was the storyteller's.