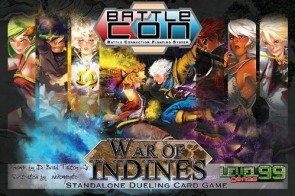 BattleCON is a head-to-head dueling card game that captures the style of fighting video games like Street Fighter, Guilty Gear, Mortal Kombat, or BlazBlue--the only differences are that it plays on your kitchen table and you don't have to spend hours memorizing button combinations to become a competitive fighter.

BattleCON boils the mechanics of 2D fighting down to the essentials so that you can focus on strategies and outwitting your opponent.

BattleCON utilizes a system of connecting cards--every character is able to make basic punches, kicks, throws, and dodges. What makes each character unique are their styles. Even though we both have a heavy punch, your heavy punch will be vastly different than mine, and since each character has five styles and seven basic attacks to choose from, there's always an option available that will turn the battle in your favor!

BattleCON: War is the best place to start learning and playing BattleCON. With straightforward characters, an introductory rules comic, and a portable-sized box, it's got everything you need to play.

BattleCON is not collectible--there are no random packs and no rare cards. A few expansions open up new modes of play, like boss battles, enhanced Tag Team Mode, and character customization, but these are all secondary on top of the main game. Everything that you will need to play competitively in tournaments is included in the box.

- Includes 18 different Fighters to master, each with a unique new core mechanic.
- Quick-start Comic rules that get you right into the action of the game!
- Ten multi-part arenas that change the game as you play!

7 Wonders
3.5
H HiveGod
"Though rife with shocking nudity and Masonic devilry, the game..."