War of The Worlds: The New Wave 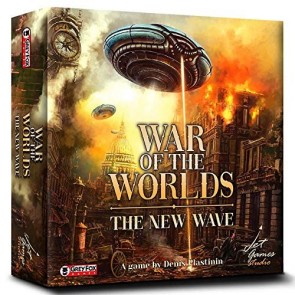 Take on the role of either the alien invasion force or the human defense forces in the two-player deck-building game War of the Worlds!

'War of the Worlds: The New Wave' is an asymmetrical deck-building game with a playing board, for 2 players. The game events unfold several years after the original 'War of the Worlds’ story by H.G. Wells. Extraterrestrial invasion occurs again, but this time the Martians arrived on a giant spaceship which lands in one of the backwater districts in Scotland.

During the game one player commands the alien forces, and the other one becomes a leader of UK self-defense units. The main objective of the invaders is to completely annihilate the population of Great Britain, while the opposite side needs to deal enough damage to the Martian army.

The game is played with 2 asymmetrical decks of cards, a playing board, tokens and miniatures. 2 players 30-60 minute play time

Legomancer replied the topic: #299141 02 Jul 2019 07:50
Almost jumped on the KS of this, but (a) the KS had ugly plastic models and retail has standees and (b) it's only 2p and the person I play 2p stuff with, we have a plethora of 2p games to choose from, so it wouldn't get played that much. Looks neat, though, and I may bite later if reviews make it sound interesting.
Read More...