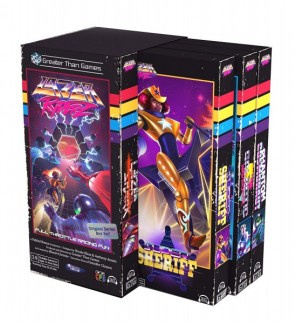 Lazer ryderz is a trackless racing game for up to 4 players with light push-your-luck, area denial, and strategy elements.

Players construct their Lazer paths with various pre-formed punchboard pieces that are placed according to speed and desired direction.

Yeah, I'm relistening to the podcast now and I think you guys have it. It's a really loose game where you need to let go of your up-tightiness to enjoy it. Though frankly, I think Animals is the real pick from the Floyd collection.

We had five people and the game plays four, so my buddy Cody became the announcer, working the rulebook like a pro as we all learned how to play. We were a little clunky at first, not fully understanding how to screw each other with the way the rules are built. But we figured it out by the end of the game and really enjoyed the play. This may be the one game were you can discuss "tactical crashing" with a straight face.

What I very often take away from your podcast is that you are able to see into the spirit of the games you're talking about instead of just what's on the surface. I think Lazer Ryderz is one of those games where you can't understand its nature until it's been on the table for at least 45 minutes, and with a lot of current gaming groups that's all the time any particular title is going to get. So thank you for bringing that more spiritual, experiential analysis of the game, the kind of thing that is sorely lacking in other podcasts. The two of you truly are the peyote of the gaming podcast drug menu.

I'll mention that my couple of thousand Wings of Glory maneuver card placements gave me a bit of a leg-up on my opponents. Sure didn't hurt.

My copy has an incorrect piece, one neutral marker is missing and a blue player marker was in the box instead. So I told Kevin to just mark it with a Sharpie and we were off to the races. I pondered asking for a replacement, but you know what? My copy is now unique, especially considering Kevin's half-assed job putting a big N on the tile. The brutalness of it is just one more thing to add to the mystique.

Had a very good time. What a weird game, but well worth the experience. 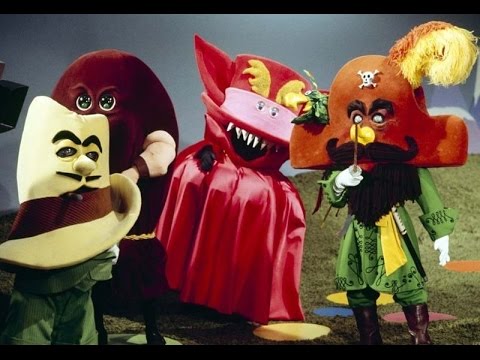 ModelVillain wrote: Whoa blast from the past... isn't that LidsVille (if I'm not mistaken)?

Oh yes, it's the koo-koo-kookiest!