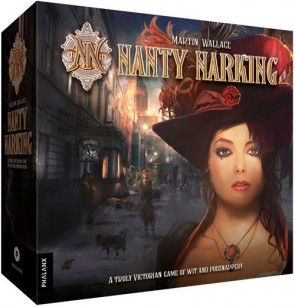 Nanty Narking is a Victorian board game of wit and podsnappery by British game designer Martin Wallace, based on his acclaimed previous design "Discworld: Ankh-Morpork." Immersed deeply in the world of Dickens's and Doyle's literature, all game locations, events, and characters are now tied to real and fictional characters and places in Victorian London.

More specifically, following a scrupulous analysis of inspirations that were found and identified in historical English literature, all game locations, events, and characters have received new identities corresponding to the ones found in the previous edition of the game. This way the game retains its attractiveness to the established audience, but expands its reach to a wide range of people generally interested in history and literature of the Victorian period.

The action takes place on the map of London, with players placing their followers and buildings on the board through card play. Each of the 132 cards is unique, and "the cards bring the game to life as they include most of the famous characters that have appeared in the various books.

The rules are relatively simple: Play a card and do what it says. Most cards have more than one action on them, and you can choose to do some or all of these actions. Some cards also allow you to play a second card, so you can chain actions" (Martin Wallace). At the beginning of the game, each player draws a secret personality with specific victory conditions, which means that you can never be sure what the other players need to do in order to win. You need to fulfill your goal while also trying to prevent others from winning!

ubarose wrote: I like this theme, but I never heard anything good said about "Discworld: Ankh-Morpork."

Podsnappery, n. An attitude toward life marked by complacency and a refusal to recognize unpleasant facts.

alternately: Smug self-satisfaction and a lack of interest in the affairs of others.

From a character, Podsnap, in Dicken's Our Mutual Friend.

I followed this nanty narking thing quite closely, because ididnt own Discworld. They balanced out the roles a bit, and added a few extra things (different buildings/minions) that you can play with or without (I think).

The art looked rubbish to me though. Like some xbox game I never heard of. Minis meant the price of the thing was heading towards OOP prices for the original. You get a sexy prostitute mini sticking her arse in the air wrapped around a lamp post (I may be conflating 2 there but yiu get the idea). The characters are a weird mash up of victoriana which could be cool except there's odd historicity problems that the designers were clearly not interested in dealing with/researching.

I pnp'd Discworld instead. I have found more balanced personality cards and did those too... and haven't used them yet.
Read More...

Diplomacy
4.0
B blarknob
"Diplomacy is a refreshing change of pace from big dice..."