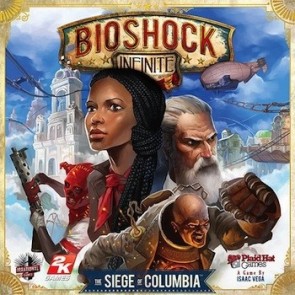 I might as well get this out of the way right now: I’ve never played Bioshock Infinite. I got about an hour into the original Bioshock, but from everything I can see Infinite is an altogether different beast. I don’t know my Booker from my Handyman. But I defy anyone to look at the production of Plaid Hat’s new board game adaptation and not be at least a little excited about playing it. It’s the sort of game where seeing it all laid out on the table makes me salivate with anticipation. I have no idea if fans of the video game have the same experience, because The Siege of Columbia takes a curious left-turn in its board game form. Rather than trying to recreate the experience of the video game, it creates a completely different experience set in the same world. It’s a well-designed piece of territorial conquest for two players. I’m just not convinced it needed the license in the first place.

One player takes the role of the Founders, and the other plays the Vox Populi. The two sides are fighting over territory in Columbia, an enormous floating city. The map is divided into sections that are composed of several locations, and you get victory points for conquering and holding whole regions. You can also get points for fulfilling different missions, a new one of which is revealed every turn. Each player has a deck of cards that represents the units in their army. These cards can be used several different way, either as a discard to make some money, a blind bid to be the starting player, or played face-down in combat to add to your roll. Through all of this, the protagonist from the video game, Booker, is trying to rescue Elizabeth. According to the event cards for the round, he might try to act as a one-man wrecking crew to whatever army is in his location. If you can get enough territory and missions, and not get too messed up by Booker, you can get to ten victory points and rule Columbia.

A lot of the usual conventions of the genre are at work here, where you buy new units, move them, and then fight. But designer Isaac Vega (who already has designed one of 2013?s best games, City of Remnants) brings a couple of cool tricks to the table. One is the skyline system, a web of rails that connects the entire map. You can move a unit along multiple skylines in a single move action, which allows you to move guys to the little nooks of the board quickly. The risk here is that every segment of the skyline requires a roll of some special dice. If you fail the roll, you need to discard cards or lose the unit. It’s got that wonderful kind of luck for which Plaid Hat is beginning to show an affinity, the kind where you are forced to rely on it frequently and must live with the consequences.

The skylines also are part of what I like best about Siege of Columbia, the way the game pushes you to spread yourself thin, take risks, and keep moving forward. You have no money in the beginning of the game, so you must conquer the locals to get some coin. The only way to generate money is to discard cards and conquer new locations. That tight economy forces you to make do with fewer units in play, which means that you spread yourself thinner and thinner. That just makes it easier for Booker to swoop in and blast a hole in your army, or for your opponent to descend on a skyline and cherry-pick an easy target, if he survives the journey. In this it reminds me of Nexus Ops, with its relentless push forward. The difference is that here you must hold the territory to generate points, which just spreads your units thinner. The dudes-on-a-map elements of this game are all first-rate, deadly and swingy, just the way I like it.

The cards all have several abilities and uses, and as the game goes on you can upgrade these abilities, either unlocking the main card action or buffing one of the other stats. This is done through a sort of “achievement” system, similar to that utilized in City of Remnants. I like this idea in theory, but in practice I don’t think it’s as good as it could be. First of all, the achievements are altogether too easy to attain. There’s very little need to think about what to upgrade, because there are turns where you may upgrade as many as two or three cards. I wish it was a little harder to do this, because that would make the decision far more difficult. The other weakness is the numerical upgrades, which can add one or two to the different elements on the card. These feel a little too incremental to me, and I have seen very few people choose them over one of the unlocking bonuses. It’s not a fatal flaw, but it adds an element that requires you to remember to do something whenever a very common thing occurs, like winning a battle or claiming an objective. We forgot them about half the time, then had to scramble to add them retroactively.

But mostly, Siege of Columbia is a very cool game. After a few games though, I’ve begun to feel like the license to a popular video game is more of a burden than anything else. It’s not that I exactly mind playing a game in the world of Bioshock Infinite, but as someone who doesn’t really know the story there’s nothing to indicate why anything is the way it is, no paragraph of background in the rulebook or anything. It’s telling that this loss isn’t really a big deal. The trappings of the setting are all there, but the part of gameplay that feels most directly related to the video game is Booker and Elizabeth, and truthfully these are not all that strongly-integrated into the design. It feels like there should be more of a drive to capture Elizabeth and risk Booker’s wrath. Some cards give bonuses for capturing her, but short of those players are usually content to sit back and hope that Booker won’t mess them up of his own accord. The skylines are also an element from the game, but one of my opponents told me they weren’t nearly this treacherous, so their most compelling quality isn’t really from the video game at all. The point is, even if the setting isn’t a big problem, it’s not integral to the experience. It could be removed from the game and you’d still be left with a killer two-player conquest game.

I have some issues with the production too. It’s mostly terrific, with cool little plastic guys and wonderful card illustrations. Like I said, it looks awesome on the table. The biggest issue is the board, which looks beautiful but is way too hard to read. The locations and territories are not very clearly defined, which leads to unnecessary confusion. Perhaps most disappointing is the price point, since this is a game that retails for $80. Most gamers won’t pay that much, but if you compare this to say, Clash of Cultures, you have to wonder why they are the same price. My guess is that the license wasn’t cheap, but that honestly just makes another case for not needing it in the first place. Most video gamers will see this game at Barnes & Noble, take a look at the price, and put it right back on the shelf. In that sense, it might be targeted more at board gamers who also like the video game, not at video gamers who are mostly unfamiliar with the hobby.

It’s too bad, because the actual gameplay here is pretty darn good, lean and fast. It encourages wild risks and offense, which makes it almost exactly what I want from this kind of game. But it’s hard for me to escape the feeling that it could have been even better as an adaptation. It’s definitely a good game, but its major flaw is that it’s tied to a license that it doesn’t use to its full effect.