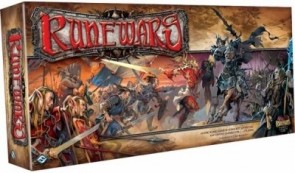 Muster your forces and make your claim to power! Strategy, diplomacy, and adventure abound as RuneWars pits players against each other in a strategic game of battles and area control, where they must gather resources, raise armies, and lay siege to heavily fortified cities in their quest for dragon runes and ultimate domination of Terrinoth. Rooted in the same fantasy universe as Runebound and Descent: Journeys in the Dark, RuneWars features over 200 beautifully rendered cards and tokens, as well as nearly 200 finely-detailed plastic miniatures, and a fully customizable, modular board consisting of hexagonal pieces that beautifully convey the richly-detailed landscape of Terrinoth.

April 19, 2019 (Updated: April 19, 2019)
Rating
4.0
Outstanding core action selection and unit recruitment mechanisms that solve a ton of the genre's extant problems. All of the mechanisms around it like questing can be a little opaque.
GS
Gary Sax Top 10 Reviewer 101 reviews
Comments (0) |

Agricola
2.0
L Legomancer
"I really do not understand the level of hype and..."

Acquire
5.0
L Legomancer
"This should be right up there with Monopoly, Scrabble, Risk,..."