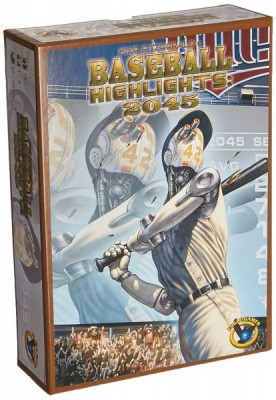 Baseball highlights: 2045 is like watching TV highlights of early 21st-century baseball games, with the gameplay being full of theme with no outs or innings and without bogging down in a play-by-play baseball simulation.

In this quick and interactive game, two players build their teams as they play, combining both strategy (building your team) and tactics (playing the game) without any of the downtime. Game includes regular head to head play as well as solitaire and 3 player variants and the means to play 4 player tournaments. The game also supports combining boxes for larger tournaments.

Anyhow, the game is pretty neat, a sort of "Blood Bowl Team Manager" but for the dugout set. You call plays, buy new players (even during the middle of the World Series, which seems kind of odd to me) and the action is meant to be a sort of overview of the inning (a "highlight", if you will) instead of literal pitch-by-pitch action.