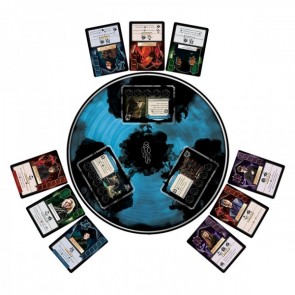 Voldemort has returned, and it's up to you to defend Hogwarts and the Wizarding World from meeting a dark and terrible fate.

Based on the fifth film, Harry Potter and the Order of the Phoenix, Harry Potter: Death Eaters Rising is a cooperative card and dice game where players must join forces to fight the growing threat of Lord Voldemort and his Death Eaters.

In Harry Potter: Death Eaters Rising, each player must assemble teams of witches and wizards from the Order of the Phoenix, Dumbledore’s Army and Hogwarts to fight against the growing threat of the Dark Lord. Starting with either Harry Potter or Hermione Granger representing Dumbledore’s Army, Minerva McGonagall or Albus Dumbledore from Hogwarts, or Nymphadora Tonks or Sirius Black from the Order of the Phoenix, players will be able to rally a variety of year-5 characters to their cause. These include fan-favorite characters, Ginny Weasley, Luna Lovegood, Alastor Moody, Mrs. Norris, Severus Snape and Rubeus Hagrid. The collective armies and players must then work together to stop the spread of dark influence throughout the wizarding world.

Players will have to battle Dark Wizards Peter Pettigrew, Bellatrix Lestrange, Lucius Malfoy and others that bear the dark mark for control of key wizarding world locations, including the Ministry of Magic, Diagon Alley and Hogsmeade Village. To be successful, players must vanquish Voldemort’s Death Eaters and eventually defeat You-Know-Who before they corrupt and take control the wizarding world.

Thinking about it, virtually any license where you have multiple heroes and one big bad guy could be applied here.

We're going to be seeing way more of this system than is necessary.
Read More...

BattleLore
4.0
BB Black Barney
"I was probably a victim of my own high expectations..."