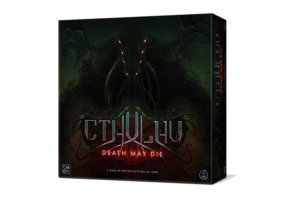 Game Name
Cthulhu: Death May Die
Publisher
CMON
Designer
There Will Be Games

Something has awoken the Great Old Ones. An unstoppable incantation has begun, and the fate of the world lies in the hands of a few brave Investigators. However, time is short. An unspeakable horror is making its way to our world with each passing second. The only hope is to disrupt the ritual just enough so that when the ancient god from another dimension arrives, the Investigators will have a brief window when it’s vulnerable… and that’s when they shoot it in the face.

Cthulhu: Death May Die is the all new game from CMON, coming to Kickstarter soon. It brings together the creative forces of Eric M. Lang and Rob Daviau. Both designers have been making games for decades, with their own unique style and approach. Death May Die unites their talents in an experience that blends narrative, theme, and action together.

Players take on the role of Investigators working cooperatively to combat evil. Inspired by the works of H.P. Lovecraft, the odds are definitely stacked against the heroes (and the rest of the world, for that matter). As each Chapter begins, the investigation has been completed, the ritual is underway, and the clock is ticking down until one of the Great Old Ones arrives and makes their presence known. The very mention of these ancient beings is enough to drive a person mad, and it should come as no surprise that the Investigators start the game insane. Afterall, you would have to be crazy to face off against these monstrosities.

To create the perfect aesthetic for this dark battle against evil, CMON recruited some of the most talented artists and sculptors in the gaming world. Karl Kopinski illustrates the Investigators that players get to control in the game. Adrian Smith is responsible for the Monsters they face (so you can thank him for the nightmares). Each of their designs were used in the creation of highly detailed miniature figures under the supervision of legendary sculptor Mike McVey. It all comes together to put players directly in the middle of an atmospheric, Lovecraftian tale.

In Cthulhu: Death May Die, the wheels are already in motion to summon an ancient evil. The Investigators must take advantage of their skills, lean into their loss of sanity, and work together if they hope to survive. Stay tuned for more articles, artwork, and miniature reveals as we march ever closer to the launch of the Kickstarter and the arrival of the Great Old Ones.

Then I read it was based on Eldritch Horror and my interest plummeted.

Then I saw it was CMON, whom I still haven't forgotten for the puerile edgelordiness of "Hate" and it went ice-cold.

I'm hoping such a talented pair can rescue this from oblivion. But I fear it's a forlorn hope.

Lang’s best work was Chaos in the Old World.

CMON’s best work is a reprint of Modern Art.

This sounds like an excuse to KS miniatures. It will fund with room to spare.

Shellhead replied the topic: #274342 31 May 2018 11:00
Some future cataclysm will wipe out the internet. Some generations after that, archaeologists will be puzzled when they find so many unpainted Kickstarter miniatures in landfills.

Leacock in the title of the thread? Is that an error?

What? No! I totally didn't just go back and correct that.

Shellhead replied the topic: #274348 31 May 2018 11:21
A couple more seasons of The Walking Dead should be enough to make everybody lose interest in zombies.

SuperflyTNT wrote: I would buy it. Unfortunately, if it Kickstarts, it will be bloated and expensive AF

This, and if I recall CMON is still one of the publishers who peddles in KS-exclusive shit, which is still my #1 annoyance with these preorder systems. Looking forward to impressions of it, at least.

drewcula replied the topic: #274574 03 Jun 2018 14:57
This would normally have my number dialed in.
However...
Lang and Daviau are not fail proof.
If this game could be more like Blood Rage and less like KaosBall - I might have interest rekindled.
If this game could could be more like Risk Legacy and less like Seafall - I might have interest rekindled.
I've never been disappointed with CMON production values, and I dig's Smith's artwork. Coupled with the Mythos, and THAT has been interested.
But after buying The Others, I think there may be a lot of illustrative overlap. I've already detected a lot of that between Blood Rage > Rising Sun > Hate.

san il defanso replied the topic: #274612 04 Jun 2018 01:08
This has the earmarks of being something that I am entirely uninterested in, and simultaneously something that those of us who are uninterested will have to hear about to the point of nausea.
Read More...