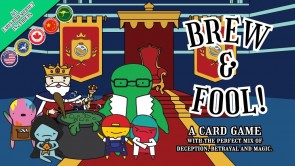 Brew & Fool! - It's finally here. A party card game for all ages! Players trade wacky ingredients, cast powerful spells and sabotage one another: all while attempting to brew the Ultimate Potion. A devious game with deceivingly cute designs: the only card game where alchemists turn unicorns into musicians and friends into enemies.

Brew and Fool is a party game in which players race to be the first to brew the Ultimate Potion with mythical ingredients. Every player has the chance to bear the Royal Emblem and be the Royal Alchemist of the round. The remaining alchemists can choose to either pay a tribute to this Royal Alchemist, Sabotage the Royal Alchemist or cast a powerful spell. By paying a tribute, you have to give an ingredient of your choice and are free from penalties. If you Sabotage or play any Spells, there are no guaranteed loss of ingredients, but you may face worse penalties if too many players follow this route.

Players can cooperate together and devise a strategy against the powerful Royal Alchemist or sabotage each other and create havoc. As all cards are played face down, players are to announce what they have played. However, they might be lying...

Win the game by accumulating sufficient cards in your cauldron to brew the Ultimate Potion!