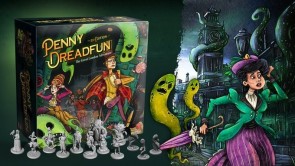 A deckbuilding adventure game set in alternate Victorian England with a little touch of steampunk and Cthulhu mythos!

Queen Victoria disappeared. Armed with a sword, two axes, throwing knives, and a pistol, she jumped out of the Buckingham’s Palace window, straight into the darkness of the night. The rumours say that the queen was bored and decided to conquer a new colony – Hell itself. There must be something going on because London is getting quite… hot. And there are more and more infernal hounds around and no one to clean after them. And more infernal chasms… and portals… Whew!

It's a true adventure.

Penny Dreadfun: Second Edition will take you to the year 1888, to Victorian England, full of occultism, British humour, and more or less historical characters. You play as one of many unusual heroes, who – driven by various motives – set off to the city to find the source of disaster and save the world, which is becoming more and more taken over by forces of hell.

But there’s more – the jokes on you mechanic will blast you with humour… literally. This game will mess with you, or mess you up.

Penny Dreadfun 2nd Edition is an adventure game where everything is based on your decisions thanks to the unique game system – create your custom hero class deck during the playthrough and use it well to move through London streets, fulfil quests, collect items and plot with encountered characters. Also the fights driven by the PD card system are simple, dynamic and they plays just like rolling dices but without randomness!

A new approach to move and board mechanics!

With each round the world known to us (or at least to those who are well over 120 years old) is getting more and more infernal. This will be reflected in the constantly changing board with playable 3D elements. That’s a completely new take on the point-to-point move system.

Check out the video below to find out how to play!