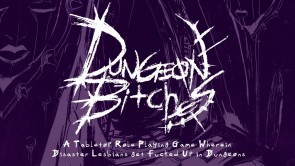 A game wherein disaster lesbians get fucked up in dungeons.

Dungeon Bitches is a Powered by the Apocalypse RPG about queerness, community, and trauma. Designed by the Ennie-winning Emily Allen (of Stygian Library fame).

Players take on the role of a band of Bitches - queer women who've struck out from their horrible patriarchal society. Together, you'll venture into the dangerous, forgotten cracks of the earth, trying to carve out a space for yourselves through will and wit alone. These shared experiences pull your Bitches closer together, and the bonds you form quickly will become your greatest strength.

The game's mechanics are light, placing an emphasis on your Bitches' inner lives and relationships with one another. Bitches are unlikely to die, but will accumulate emotional and physical scars as they're put through danger. Only the bonds between you and your fellow Bitches are strong enough to pull you through.

There are ten character Deals to play as, each of which spotlights one set of themes for her player to explore. For example, the Wounded Daughter's desperate focus on survival at all costs, the Lantern Girl's struggle with uncertainty and paranoia about her identity and how she fits into this new world, and the Disgraced Princess' grappling with social privilege and its sudden absence.

The game comes with comprehensive advice for players. It discusses how to handle difficult topics safely and responsibly, and delves deeper into topics such as queer romance, trauma, sexuality and violence. Likewise, there are a range of tools for running the game, including a streamlined processes to create a setting evocative of Dungeon Bitches' themes.

Michael Barnes replied the topic: #318160 19 Jan 2021 11:09
While you are at it, check out Stygian Library and Gardens of Ynn- absolutely spectacular work also from Emmy Allen.