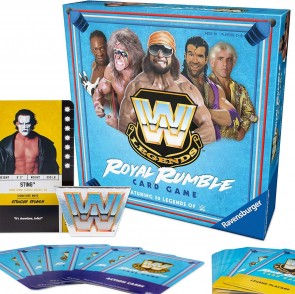 Enter the ring as a legendary WWE Superstar and face off against your rivals in the WWE Legends Royal Rumble Card Game!

Use electrifying attacks and signature finishing maneuvers to eliminate your opponents! New Superstars enter the Rumble as others are thrown over the top rope. Can you survive the brawl to remain the last Superstar standing?

Includes 30 Legends such as “Macho Man” Randy Savage, Jake “The Snake” Roberts, Ultimate Warrior, Ric Flair, Booker T, The Undertaker, Razor Ramon and Andre the Giant, each with their own signiture move.

Avalible for pre-order from Target begining July 26, and on Amazon in August.

Also weird that it is showing as in stock in South Windsor and Enfield, with a delivery date of Aug 4 if you have it shipped to your home.

Very annoying to go all the way to Target to get it and not have it on the shelves. Sorry if I was the cause of a wasted trip.

Josh Look replied the topic: #312589 29 Jul 2020 19:01
No, I used the app and they sent back a reply saying they couldn’t sell it to me, no time was lost. It’s now listed as “in stock” everywhere but not available for pick up. I went through this with Prospero Hall’s Monster Crunch game a couple years ago, it’s sitting the back room but the registers won’t let it out the door. It’s fine, I preordered from Amazon.
Read More...