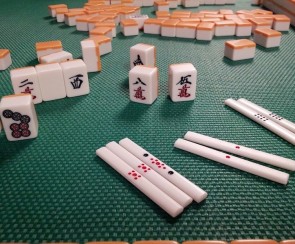 Game Name
Majhong
Players
4 - 4
There Will Be Games

Mahjong is not the solatre game that used to be installed on windows. It’s a 4 player set collection game played across East Asia with awesome chunky tiles that are so satisfying to clack together. Traditionally they are made of bone, these days often plastic and they come with three main suits; bamboo, coins, and characters, then some special tiles; dragons, and winds. I want to talk about specifically Japanese ‘Riichi’ Mahjong. Best shouted REEECCHH like a squirrel in mortal danger.

In China, Mahjong is a family game, very similar to rummy, played by families whilst they await New Year dinner. In Japan Mahjong is Yakuza gambling parlours and emotional anime cartoons. The later is more exciting.

Mahjong is a popular Manga and Anime topic

If you took 4 player rummy, a tea ceremony, but with blocks rather than tea, and a 3 page long scoring system and glued them together you’d end up somewhere near Riichi Mahjong.

I always relied on those I was playing with the remind me of the ceremony rules, usually anime fans in a pub somewhere in Leeds.  You roll off to decide who deals, count backwards around the table, roll again to decide where to cut in the 4 walls that make up the deal etc. Its rather complex and has little impact on the games strategy, but does set the atmosphere in a big way. If you stripped the theatrics out Mahjong you would lose something. 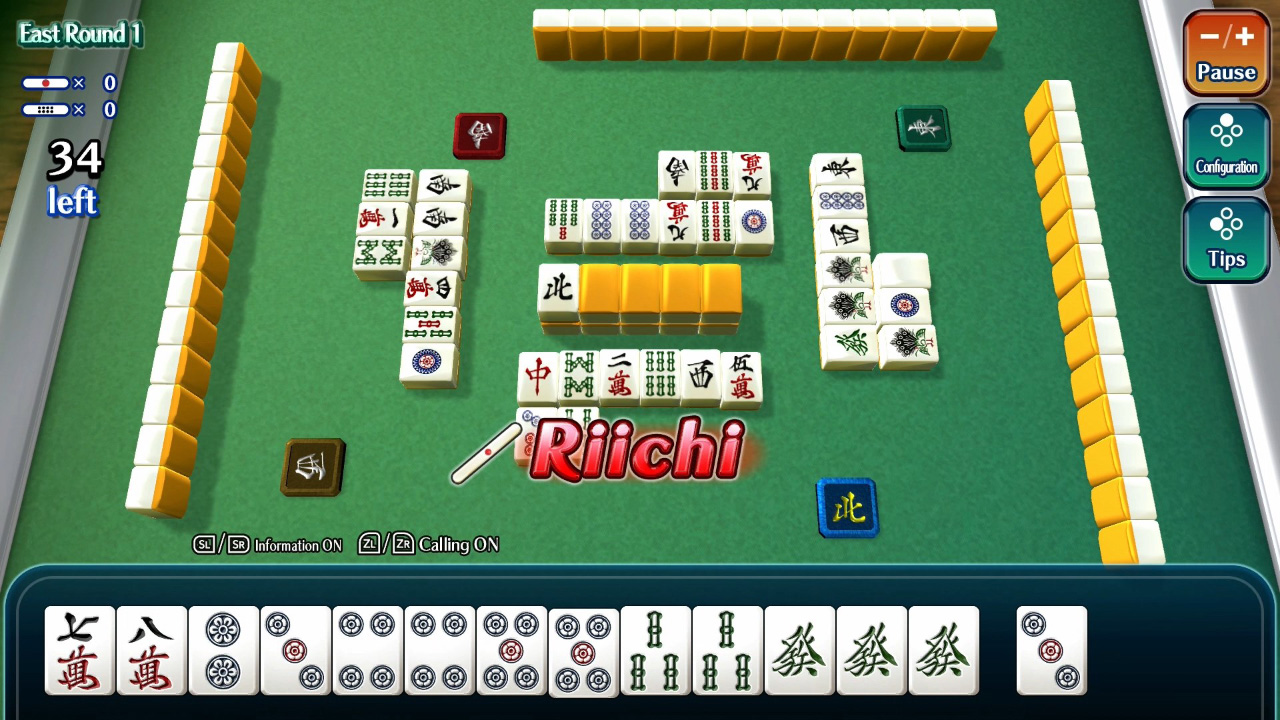 In essence you have a hand of 14 tiles, each turn you draw from the wall and discard one. You are trying to make sets of 3 or 4, or runs of three. In basic Majhong any sets will do, all that matters is going out first. Once you turn all of your hand into sets, you flip the hand open and score. In addition to drawing from the wall, you can call other people’s discards if they let you finish a set that you lay open. Sounds familiar if you’ve played rummy.

In Riichi you need a Yaku, a specific scoring combination to go out. There are dozens of different Yaku combinations. Some such as Riichi are fairly easy, just collect a closed hand (never call someone elses discard) and bet 1000 points on going out first, others such as the 13 orphans are very hard to get. Some only apply if you are the dealer, or sitting in a specific position in relation to the dealer (the winds). The decision points hinge around whether to go for multiple Yaku and massively multiply your points or try and get out quick, as only first to finish scores. 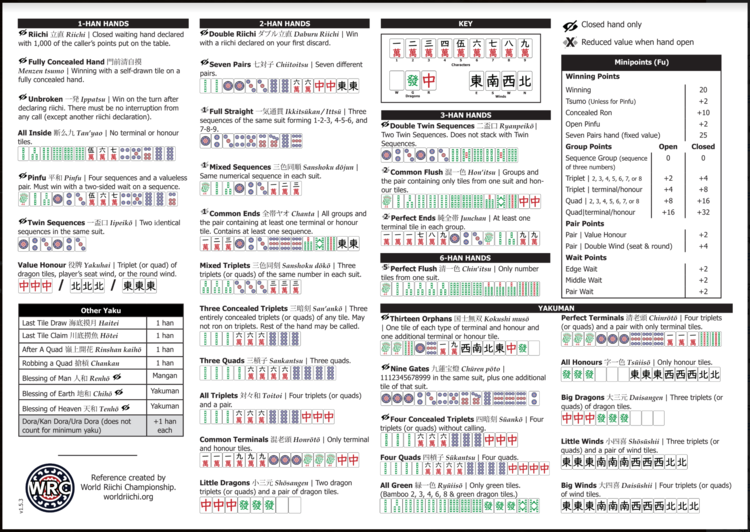 The Yaku scoring system. I've been playing Mahjong for a few years and have never scored most of these.

Like rummy, the game balances greed against risk. A major advantage of the Japanese Riichi rules over regular Mahjong is that watching other players discards is more meaningful. If you can deduce what Yaku they are aiming for, you can avoid helping them, or even predict how close to going out they are.

The scoring can be pretty wild. If the winning player completes their hand by drawing from the wall, everyone else pays an even split to their score from their pool of chits (everyone starts with 30,000). However if the winning player draws their last tile from your discard, you pay them their entire score. This can be more than 10,000. This can result in wild swings in score, with last place becoming first place etc.

Whilst it takes quite an effort to learn the scoring system is what makes them game. Realising you can get a Yaku combination you’ve never got before is a massive payoff, both in points and satisfaction. On top of this, it’s a great lazy afternoon game, hang out with 3 friends get some drinks, listen to some jazz and run down the clock to Mahjong.

the_jake_1973 replied the topic: #321209 25 Mar 2021 10:20
When I was learning Mahjong, I was really surprised at the variety of scoring as you moved from region to region...or even within region for that matter. I have a decent set, but have not gotten my group to sit down for a play.

Jackwraith replied the topic: #321225 25 Mar 2021 12:19
I learned a bit of "mahj" as a kid, too; playing with my grandmother and her friends, but got clobbered and lost interest and mostly forgot about it. They played the Yaku style that Duke mentions, but I later discovered a Hoyle ruleset that doesn't use the Yaku combinations and instead just scores hands based on one table (open sets are worth X, closed sets are worth Y, sets of dragons are worth Z, etc.) I found those rules because my housemate at the time was playing the tile-matching videogame constantly and mentioned it to her mother, who thought she was talking about actual Mahjong and got her a really nice set for Christmas. The rules, unfortunately, were basically unintelligible (this was in the mid-80s) so I found a book that had Hoyle rules for all kinds of classic games and learned to play with those "neutral" rules. I taught my then-girlfriend and her son and his girlfriend and we played constantly. There were many evenings when the three of them would come over and we would play until midnight. We had a glass-topped kitchen table in our apartment and my housemate would say that the sound of us playing tiles was like listening to castanets. (clickclickclickclickclick)

I loved the game and when we split up, my housemate walked off with my toaster oven so I kept the mahj set and still have it today. I've taught a few other people to play since then but no one has really taken a shine to it the way that first group did. I think it's kind of a perfect "two couples" game and hoped that my ex-wife would latch onto it in the same way and find a pair of our friends who would play, but she never did.

jason10mm replied the topic: #321259 25 Mar 2021 18:59
I feel like articles such as this should come with recommended "how to play" guides and TWBG affiliate amazon links to basic/fancy/luuuuuuuuxury versions of these games

As a kid my folks had a whole cabinet with stuff like this, likely scored at yard sales over the years. We rarely learned the rules, just invented games with the pieces.

DukeofChutney replied the topic: #321262 25 Mar 2021 19:49
I try to avoid to much rules explanation in my articles and tend to gloss over stuff and over simplify as when i read reviews I am never interested in rules re-reads. In Majhongs case I dont fully understand the scoring system that Riichi uses and never played the many other variations out there. I play it on steam using the Kemono app which is a fairly good entry point.

The more common scoring systems of X points for a four of a kind, Y for a three and Z for a run of three, draw one discard one, first out scores are quite easy to learn, but the game gets more interested if a few extra layers are added. The Hoyle rules sound interesting.

When I played, the women had Mahjong cards that had the scoring on them. Every year the scoring changes, and you have to order a new card from the National Mahjong League. They cost like $10 each. Everyone had to have a card, no sharing. So my first hurtle was these seemly sweet old ladies gate-keeping me because I didn’t have a card. Finally they agreed to teach me using last years cards, which they all had, and someone sold me an extra one that some else had. And then the kicked my ass. And then they proposed that next time we play for money.

ubarose wrote: Ok. I added some Amazon affiliate links to mahjong sets at the bottom of the article.

When I played, the women had Mahjong cards that had the scoring on them. Every year the scoring changes, and you have to order a new card from the National Mahjong League. They cost like $10 each. Everyone had to have a card, no sharing. So my first hurtle was these seemly sweet old ladies gate-keeping me because I didn’t have a card. Finally they agreed to teach me using last years cards, which they all had, and someone sold me an extra one that some else had. And then the kicked my ass. And then they proposed that next time we play for money.

We learned on American Mahjong too (schooled by grandmas, as is tradition), and those cards are The Actual Dumbest Thing about what's otherwise a pretty alright ruleset. Ended up moving over to Riichi and never looked back, but I'd sit in on an American game if the opportunity arose.

Won't lie, a significant part of why I've been reviewing almost nothing but video games is that 75% of what would be board game time has just been Mahjong for the last few months.
Read More...