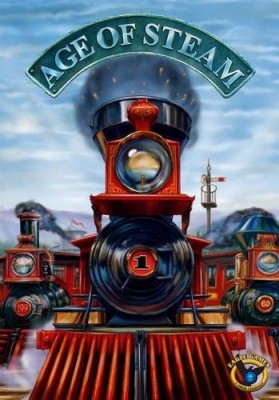 With the new Age of Steam Kickstarter, the old Age of Steam Legal dispute has resurfaced. As some people may be unfamiliar with the dispute we are reprinting this article originall published here in 2009 with an added up date from March 14, 2019,

Copyrights Associated with AGE OF STEAM

The back of the Warfrog AGE OF STEAM indicates that the game was licensed from John Bohrer's Winsome Games, and that Winsome owns some or all of the copyrights associated with the game. Wallace has since said that this statement was included on the box as a symbolic gesture and as a favor to Bohrer, to "big up" Winsome. As well, it acknowledges that Bohrer wrote the rulebook and that the expression of those rules is Bohrer's intellectual property even though Wallace invented the game systems.

The AGE OF STEAM Trademark

On February 10, 2007, Martin Wallace filed a trademark claim with the US Patent and Trademark office for the word mark AGE OF STEAM. On July 22, 2008, John Bohrer filed a competing claim , and eventually prevailed. AGE OF STEAM is now a registered trademark of John Bohrer.

FRED, a games publisher and distributor based in Illinois, licensed the trademarks and copyrights appertaining to AGE OF STEAM from John Bohrer, and proceeded to publish it. Wallace argued that the game was effectively "stolen," and that he did not personally authorize the FRED edition. FRED claims that they offered to pay Wallace some form of royalty for FRED's edition of AGE OF STEAM, but Wallace refused.

Wallace has publicly accused FRED of unethical behavior. Specifically, he criticized FRED for publishing AGE OF STEAM without his consent, and for using the AGE OF STEAM boilerplate logo on the front of the box, which Wallace claims to own.

Wallace then threatened an injunction against FRED, to prevent FRED from selling the allegedly unauthorized AGE OF STEAM. At that time, he also made some other demands, including the return of some unsold Warfrog games, immediate payment of royalties on all sales of BRASS (either sold or still unsold) that had been sent to FRED, and $25,000 as a fee for the use of the AGE OF STEAM boilerplate logo.

If you look at the emails, there are plenty of other bitchy little details, the most important of which was that Eagle Games, which is now owned by FRED, paid Wallace 5000 GBP for the rights to some unspecified future game design. Neither party seems to deny that Wallace never fulfilled this obligation. Another detail is that Wallace was deliberately withholding the graphics files for BRASS from FRED, even though they had some agreement to reprint the game, and FRED had paid for these files.

Neither party seemed to know until recently what was in the contract that Wallace signed with Eagle Games. Wallace has even said that he lost his copy of the contract during a house move. By July, though, FRED found the contract (on an abandoned hard drive in Glenn Drover's garage) and had their legal counsel look it over. The contract was signed prior to Eagle's release of RAILROAD TYCOON and STRUGGLE OF EMPIRES, and it mainly concerns those games. This contract doesn't just license the games from Wallace, it transfers to Eagle "all right title and interest in and to [both games] and all [their] iterations, including but not limited to, the trademarks appurtenant thereto merchandising rights, ideas, concepts and rules...." Wallace was paid 10,000 GBP for each of the games.

Glenn Drover recently explained (on boardgamenews.com) that Eagle Games bought the two games outright -- instead of following the usual industry practice of licensing them for a limited time -- because Wallace was experiencing personal problems and needed money. In order to justify a large immediate payout to Wallace, Eagle assumed all rights to the games. Drover also explained that this contract entitled Eagle to create derivative works based on the properties that he'd purchased, and that he intended to use ability this in the future.

The contract with Eagle permitted Warfrog to continue to sell AGE OF STEAM in its original form. However, the contract further specifies that the game may be published, manufactured, or sold "in no other form or publisher [sic]."

On July 20, FRED filed a legal complaint against Wallace in Illinois. The details are:

Where Did the Contract Go?

When Wallace originally signed the contract, he faxed the pages that bore his signature (and no others) to Eagle Games. FRED says that the bank from whom they acquired Eagle's assets never gave FRED more than those faxed pages, so the only copy of the contract that FRED had in its possession until July 2009 was incomplete. Two pages that contained much of the substantive text of the original contract were lost until Drover found the (presumably unsigned) document on the hard drive in his garage. Further, Wallace has stated that those two pages aren't the same as the contract that he originally signed, and that he would never have agreed to the terms they specify. FRED has called Wallace's accusation that the two pages were "subsequently added by FRED" libelous.  Further, FRED claims to have incontrovertible evidence that Wallace signed the contract that was discovered in Drover's garage. Here are FRED's words:

As Glenn Drover has clearly demonstrated, these missing pages certainly and unequivocally were part of the original contract, delivered to Wallace on March 4, 2005 and Martin Wallace equally clearly “signed up to the clauses in those two pages” on March 7, 2005 in spite of his July 23, 2009 false accusations and assertions to the contrary.

What FRED actually has is an email exchange between Drover and Wallace. On March 4, 2005, Drover sent a contract to Wallace in the form of a file attachment. Drover reports that this contract is identical to the one that was attached to the legal complaint that was filed against Wallace by FRED on July 20, 2009.

Have signed agreement and asked friend to fax it to you - don't have fax myself. Let me know if you have rceived it. If there is any chance of the money being paid int my account this week that would be useful.

In informal conversation with a lawyer specializing in contract law, I have learned that a dated computer document containing the text of the contract, when accompanied by faxes of the "signing pages," will usually be sufficient, at least in Canada and the US to constitute an enforceable contract.

FRED has explained that they would have actively opposed Mayfair's publication of STEAM had the text of the contract been available to them previously.

Both parties claim to be open to some form of arbitration.

March 14, 2019 Martian Wallace Announces on BoardGameGeek that He and Eagle-Gryphon Games Have Reached an Agreement

From the desk of Martin Wallace:

1) Whatever disputes about Age of Steam that may have existed in the past have now been resolved to both parties’ satisfaction.
2) I will no longer dispute that Eagle-Gryphon Games (EGG) is the proper successor in interest to Eagle Games, the entity I signed a Purchase Agreement with in March, 2005 conveying various ownership rights to Age of Steam; Struggle of Empires; and a game to be designed at a later date.
3) I have conveyed whatever rights I might have in Age of Steam free and clear to EGG.
4) I will not dispute that EGG is the sole and exclusive holder and owner of the rights to Struggle of Empires, Railroad Tycoon (later named Railways of the World), and Railways of England and Wales (later named Railways of Great Britain) – games that I conveyed to Eagle Games.
5) I also give my permission to Eagle-Gryphon Games (EGG) to use my name in relation to the Age of Steam (AOS) game at EGG’s discretion (e.g., on the box cover; on the rules; in advertising and marketing including press releases regarding Age of Steam; and specifically in any Kickstarter campaign, updates, comments, etc.). I realize that they are under no obligation to use my name on the AOS box or otherwise and that is perfectly okay with me.
6) I will no longer speak or write ill of Eagle-Gryphon Games, in public or in private. I will write no more BGG threads or on any other similar forum negative comments about EGG, as I have no basis to continue to do so. EGG has agreed to reciprocate. In short, we are both ready to put this behind us and move forward with our respective projects.
7) I encourage everyone with an interest in the present Age of Steam Deluxe campaign running on Kickstarter to pledge and support that production and not to feel that some obligation to me prevents them from doing so.

If you enjoyed this article, please consider liking us on Facebook and/or following us on  Twitter. It would be much appreciated.

southernman replied the topic: #293899 15 Mar 2019 13:17
MW broke the two golden rules of business (and life in general):
Never trust anyone when money is involved (some would just go with the first three words).
Always keep the paperwork
Read More...