Here's the second part of my Essen experiences, consisting of the games I played, so with a little more hard info on the games. Look here for Part 1 and the Polish section is coming up.

Nate Hayden's Mushroom Eaters 3D experience is singular, but the road is the destination. As you progress on the board through your trip, you face numerous challenges costing you physical and mental strength. This can turn your trip into a bad trip. You have some control over where you land, and you can regain strength at some points or learn mantras to protect yourself, but it just ambles along with us finding out where we were going. 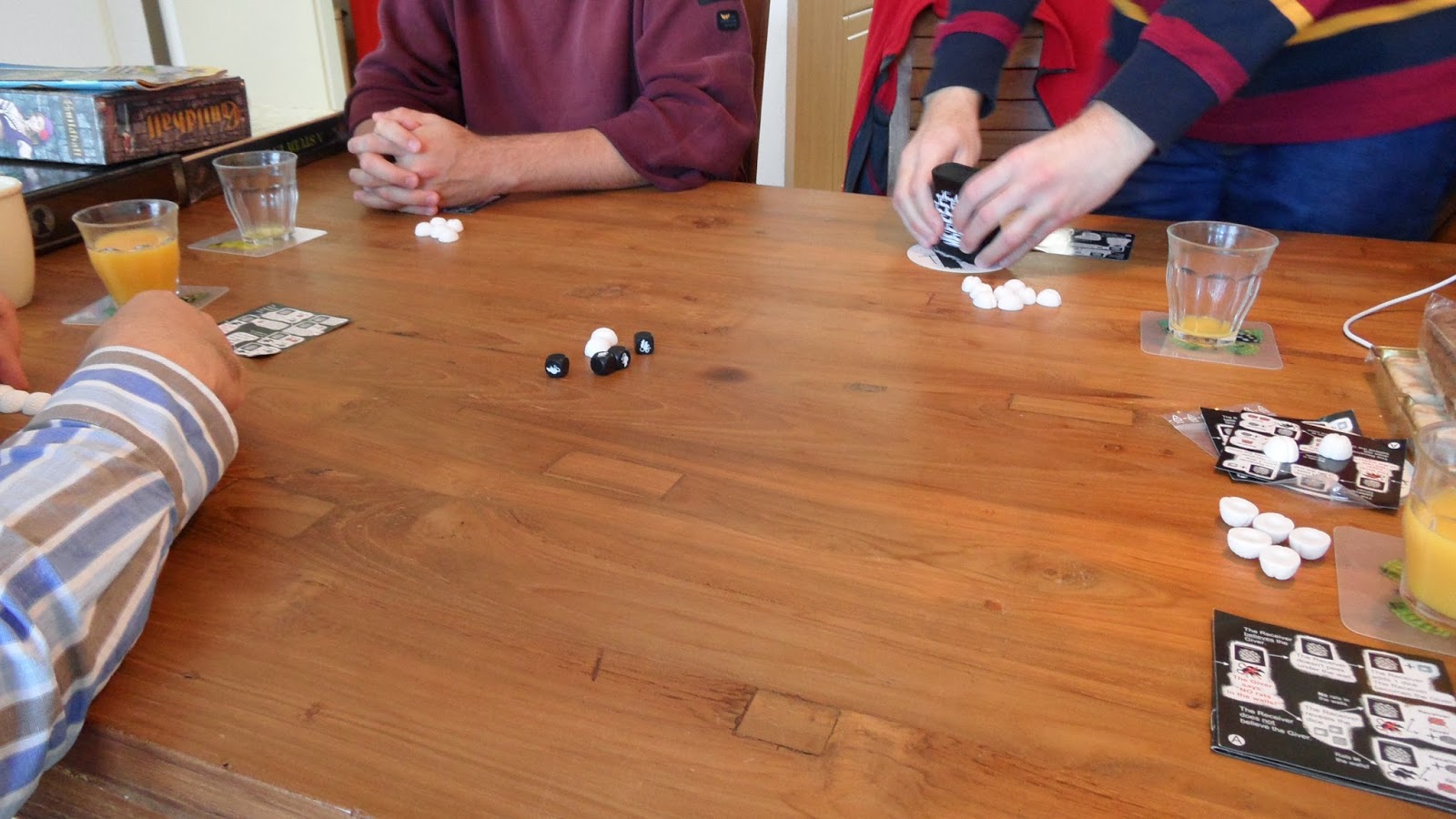 There Are No Rats In The Wall! We've been Enjoying this unpretentious but effective bluff poker game with a Lovecraftian twist by Henning Poehl. Perfect for playing in the bar.
I had some fun playing Warlock by Quined, it had some interesting scoring mechanics and the combination of tile laying and deck building. You have to play cards from your hand to be able to place one in the 4x4 grid before you. Where you place them determines how much they are worth at the end. It's mostly multiplayer solo, although you can destroy other players' cards if they're unprotected (by dragons). Rules were not always intuitive but Warlock will play smoothly after one game.
In a world where royalty are really the Ancient Ones, revolutionaries and anarchists are also saving the world from the return of Chaos. Your agents roam the cities of Europe to assassinate royals and control resources. As your identity is hidden, the other players don´t know which side you are on and since the game is lost by the side with the player with the fewest points, it becomes abit of a gamble who you attack. It’s great to see Martin Wallace slowly exploring the possibilities of combining deckbuilders and boardgames, and it is surprising not more people have latched on to this. I love how A Study In Emerald integrates cards and board, theme is fun, but we only played a dozen rounds or so. Hard to tell yet how good it really is.
Masters of Revenge by Serious Poulp has a cool take on the manoeuvering of martial arts. I liked the numbers on the sides of the cards determining your attack and defence values. This created an interesting dynamic as you moved around looking for a weak spot in your opponent´s defence. Regretfully, it was overpriced. Nevertheless, I will have a look at their 7th Continent kickstarter which is a choose-your-own-adventure-game that uses tiles rather than a book. 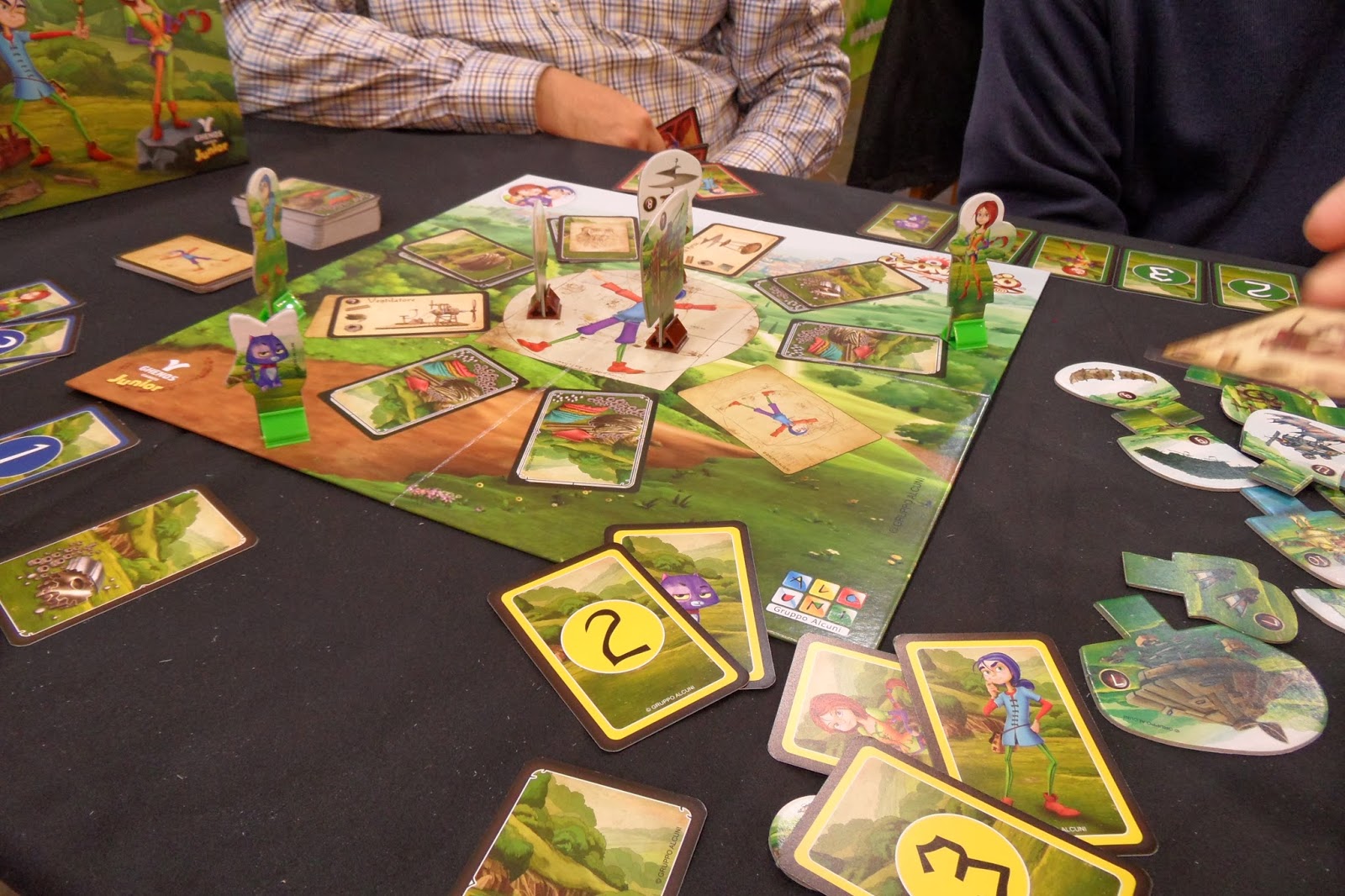 Leonardo by Ghenos is a fun light game where you gather resources and build machines by moving one of the three figures around the board. But if you are late in the turn, chances are another has moved that figure first. That makes for an interesting guess, giving you the occasional euphoria of outsmarting your opponents. 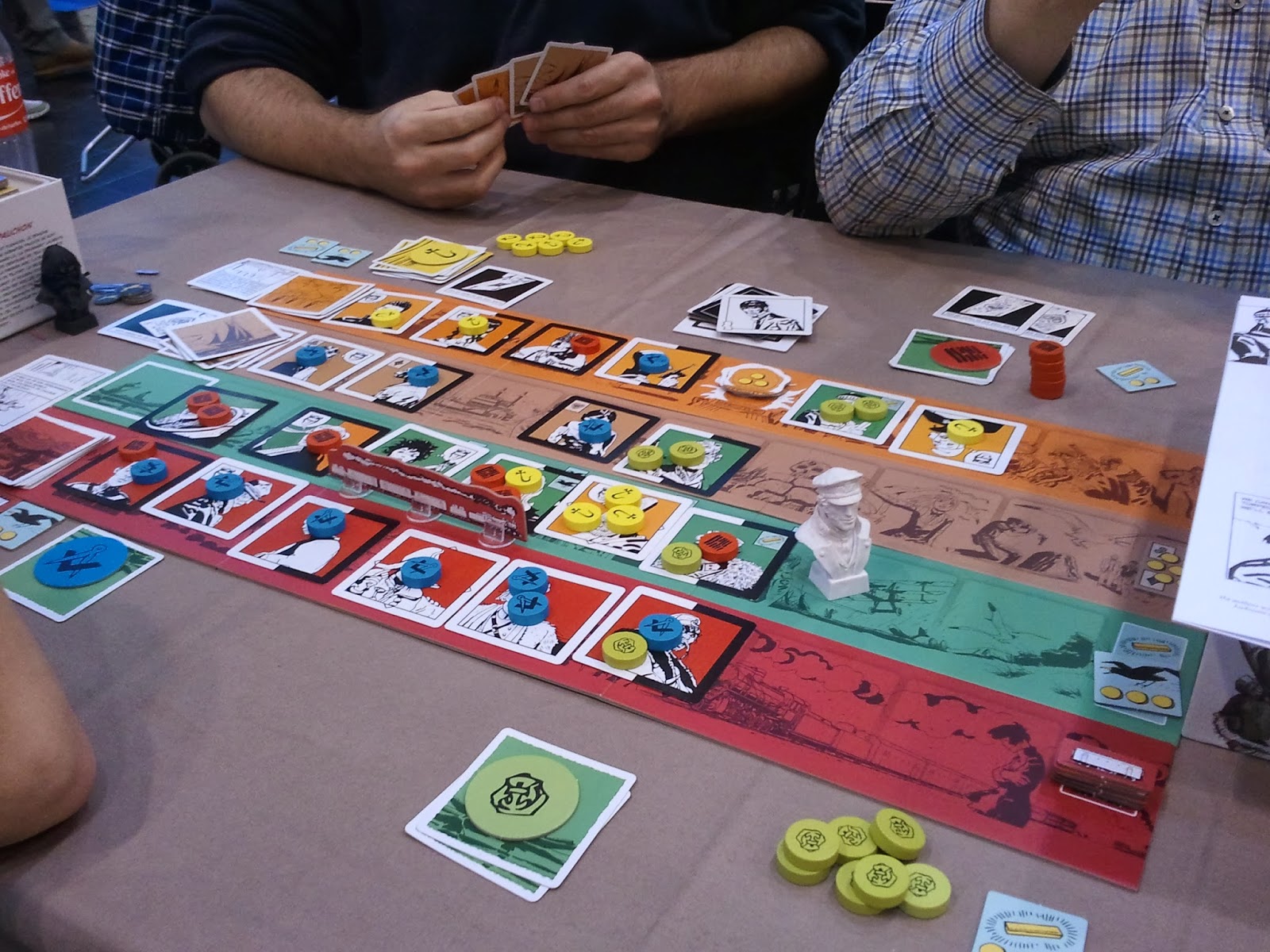 Corto got me by the great art work and the direct conflict. There´s character cards and events which allow you to mess with other players tiles and affect the scoring. Scoring is for characters you have killed, groups of characters you control and point particular to a story line. It is really a pretty abstract tile laying game, even if cutthroat, and it irked my friends as it didn’t have a narrative as you would expect from a game about a comic book. But if you don’t care about that bit, this is one of the prizes this year.
Although an older release, I don’t want to leave out Puppet Wars, which we played and enjoyed a lot. The miniatures are brilliant, but require some glue and paint to bring to life. The game plays fast and furious (especially if you put your leader out in front). The basic mechanics are pretty simple, but the special abilities of the dolls (especially the combos) make this a challenge to master. I might just buy it some other time for the heck of it.
There Will Be Games