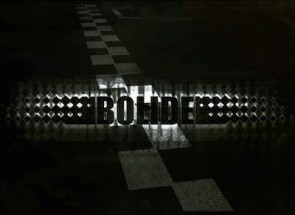 I had put word out to my friends that I wanted to get at least one session of Bolide in this summer, a full game using the full rules.  Having the game be the Summer Challenge gave me extra barging rights, and this past Tuesday proved the perfect moment as the one guy in our group that hasn't cared for it much in the past was away.  I was lucky enough to have it with me in spite of driving the beater this week.  We played one of Love Letter's cousins (that was lackluster), then Bolide, then most of a game of Thunder Alley.  Without a doubt, Bolide presented the best buzz for the money.

This was on the English track with four cars and we wrung out all the rules.  Each player customized their cars and I chose the full-fuel hard tires ("tyres" as written in the English translation of the Italian original) version that gave me three hard braking maneuvers, but I chose the transmission customization since, with full fuel and slow tires, I would need to be reaching for the booster on any number of occasions.  My three buddies grabbed more aggressive configurations with one car going with the balls-to-the-wall setup of soft tires, half fuel and booster setup.  All cars on the road would be faster than me, but I would be able to bullshit in three turns and, with a full load of fuel I wouldn't likely need to Pit when they would be forced to.  The challenge for lap one was to stay in view of the leader, then get by him in the Pit and hope to hold out against his better speed in lap two. Coming out of the first serious turn in lap one is shown at left, and it shows our second plays after a very rare pace car moment in Bolide.  Cars line up one behind the other, and my slow start let me pick up a few boxes worth of distance on the front-runner.  (I'm the red car in the back.)  Note the white pawn on the track -- a place holder for whatever car is in the process of moving so that the player can more freely throw things around a bit.  If you screw up you know where you started.

There's a timer included in the box but we never used it, largely because you can be working out your move in advance as others play.  On the rare occasion that someone steps into your way or takes your spot you have the option tucking in right behind them and using the draft rule to more or less reach the same position on your next turn, or trying to kick them out of your chosen spot with the "engagement" rules, something we made plenty of use of.  I'd guess we were on that chart about fifteen times in two laps.  In the corners a particular spot can be much more critical and the English track has one line of points on the tightest corner that are critical to your success.  Players contended for positions both times around but I was unlucky enough to be trailing the first time, leading the second, so wasn't in the scrum. My red car is the slowest car on the track but holding second place through good work in the turns, and certainly maintaining my goal for turn one -- in view of first place.  It's hard to appreciate from a static photo but a look at the velocity markers indicates that green is going faster than me and has no pressure to slow down -- he's into the Pit for sure and will get fresh tires for use in extra hard braking maneuvers in lap two.  He has to pit.  He isn't far enough ahead and he knows it, and what became apparent to us was that the long, diagonal straightaway (right hand side of the photo) on this particular course does not favor the fast cars -- a limitation on your longest axis is not a limitation on your combined axes, and 5x5 is about as fast as you can go on that patch of track regardless of your car's top speed.  It's still plenty fast, but 7x7 or 8x8 isn't something that can practically play itself out.  So my car's slower top speed of 5 wasn't terribly punishing.  It pays to analyze the track to be played before customizing your car, and I had gotten lucky by grabbing about the best setup possible for this one.  More care will be taken to review the lay of the land the next time we play.

At this point in the race we were punching out our turns in seconds.  In the curves we were still having an occasional delay as people tried to work out how to handle hard braking and how to wiggle around the inside edge of the turn.  But after the first lap we all had it down.  As one player would finish the next was reaching for their car, and a steady cadence of "five spaces over, two down; five spaces over, two down" as first the car and then the marker moved was rhythm of the play.  Only on rare occasions was someone counting to the turn, we had enough experience to shoot from the hip and hit our marks.

What becomes apparent as you get a game under your belt is how much the vector mechanic mirrors real life.  Bend wide out before the turn, aim for the inside edge, finish wide to keep your speed up.  In a real car your tires are converting the kinetic energy in one direction into kinetic energy in another, and of course that's not what's happening in the game.  The game is much more contrived but it's still intuitive, and it results in the same mechanical concepts as you'll find in real driving.  I'd be curious to see bumps to the rules that imitate drifting in a rear-wheel drive car or nose jamming with a brake tap in a front-wheel, but I don't know how you'd do that or if it would be worth it.  Food for thought.

As it turns out I really hit my stride in lap two, being much more efficient in the turns and managing to stay ahead of the faster cars behind me.  They were closing, and on a track with two long straights they likely would have caught me.  But as it was I crossed with two turns to spare, this on a track with a tight turn just before the finish line.  Good racing, I thanked those present for indulging my request and got positive reviews from all in the room.  My one friend is not a big fan of the game, but I may keep it in the back of the car for nights he doesn't show.  It will make the trip to WBC this year as well and I'll see if I can con some folks into releasing their inner gearhead.