The Devil's Cauldron Episode 2: Bring Me Everyone! 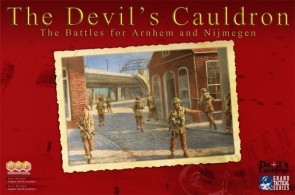 Right! To the bridge!

Took some losses on the landing? Tragic but no time to worry about that now, old chap. Over 8 miles to the objective? Well that's not so far...yes I know you've no transport...that's why His Majesty issued all your troops boots...put that shoe leather to use! Look, it's a sticky situation but at least there are no tanks..now hop to it.

1st A/B has but one option. To double time it down the two main avenues into Arnhem. There are a few things standing in their way. The units of Kampfgruppe Kraft. A couple of infantry units and a motor section really. They scramble to take up blocking positions along the roads. They have no real expectation of stopping the British. Their hope is to delay them because as far as the German's are concerned every minute gained is a victory. They know help is coming.

They achieve little. The Red Devil's have fire in their bellies and they are stopping for nothing. They steamroll right on past the units of K.G. Kraft. "Pip" Hick's Airlanding Brigade reaches the outskirts of Arnhem by nightfall but encounter a few Germans from the Frundsberg Division.

"Hey! Those aren't old men and young boys! Those guys are with the SS. And armored cars? There better not be tanks....you said there would be no tanks!"

"Fragments of units only. They must be here because they were too beat up and too spent to fight. They should be pushovers. Don't worry."

These SS troops aren't numerous enough to stop Hicks but they do force him to deploy his forward units for battle and by the time that's done, night has fallen. The fight will have to wait for dawn.

Along the other road, General Lathbury leads his troops from the front. They charge through the local suburb of Oosterbeek, brushing aside or destroying any resistance, and then use a viaduct underneath the local rail line to push right into Nijmegen proper!

They've come a long way in the few hours they had but not far enough. If the enemy can get ensconced in the buildings of the city, they will make a very formidable defense.  Hicks can hear every tick of his watch. Speed and surprise!

Meanwhile....back to the west near the towns of Ede and Wageningen two German officers have a conversation....

"Leutnant, bring me everyone."

"What do you mean 'everyone'?"

Units of K.G. Von Tettau are arriving but these forces really are cobbled together. Soldiers from the police academy, signals units, even the regimental band!

Musician: "But I'm no soldier."

Sergeant: "Did you go through basic training?'

Sergeant: "Did you fire your weapon in basic training?"

Sergeant: "Then grab your gear." (hucks trombone over stone wall)

They aren't very impressive but the command decision was to leave the LZ's practically naked in order to give the drive to the bridge maximum strength. They could be a problem.

Over by Grave, the 2/504th moves in to secure the bridge.

No, Colonel, you must be mistaken. There are no tanks. Yes, I understand you THINK you see a Mk 4 Panzer but I think you'll find it's probably just a Volkswagen. No, sir I don't think you're an idiot...

While Easy Company works on taking out the AA guns on the far side of the river, Dog and Fox company run up against the unexpected. A unit of panzers were in the town for refit. This is going to make things tough.

Other units of the 504th have raced north to try and find a crossing of the Maas-Waal canal. The guys of Alpha Company start to get excited but are disappointed when the bridge at Hatert blows up in their face.

Over by Groesbeek, the 505th marches all through the night to get to Nijmegen by morning. Darkness results in confusion and they are all strung out down the road. It's going to take time for them to get their act together in the morning (time always time).

The 508th has dug in outside of town in order to protect the flank of the other units and to safeguard the landing zones. It's a good thing too because the Feldt division is coming for breakfast and they look hungry.

(This is the second episode in a series of blogs about my play of Devil's Cauldron. Episode one can be found here: http://fortressat.com/blogs-by-members/4753 )