The Devil's Cauldron Episode 3: No Fight for Gentlemen 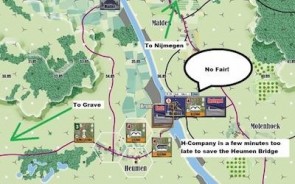 The 18th dawns cold and foggy. The soldiers of the British 1st Airborne Division look skyward and feel their stomachs sink. Unless this weather clears, the 2nd drop scheduled for today will not arrive. At the very least, the 4th Parachute Brigade will be delayed. And delay is the one thing they cannot afford. Every minute brings more and more Germans to oppose them.

Despite the briefing given before the initial attack, the Germans are not all old men and school children.  There have been units of SS and some armored elements. They are not the pushovers the planners envisaged. They have put up a stiff resistance and prevented the Red Devils from attaining the bridge on the 1st day.

To the south, the American 82nd Airborne has failed to meet any of it's first day objectives. The bridges around Grave and Mook remain un-taken.  They have failed to find an intact bridge over the Maas-Waal canal and most important of all the bridge at Nijmegen is firmly in the control of the Germans of the Frundsberg and Feldt divisions.

The landing zones around Groesbeek remain clear. That is good news. If the fog should clear and the second drop should come, it would be disaster to have the Germans on the landing zones to meet them.

The 504th is doing it's damnedest to take those bridges. H company, having to deal with some sporadic fire from an anti-aircraft emplacement arrives just a few minutes too late before the bridge at Heumen is detonated.

And soon there after are treated to a repeat performance as the Malden Bridge is destroyed as well.

Not to worry, there are plenty of other bridges...

Well maybe not so many. There are two left, not counting the bridge at Mook which is way to the South and would require a long and painful redeployment to get to, and they are at a town called Neerbosch. There is the road bridge which is by far the more desirable of the two. And....it goes boom.

They rush the bridge....

All is not doom and gloom though. Back to the south and a bit earlier, the 504th had some spectacular success against those panzers outside of Grave. Yes, yes, I know...there are no tanks....but these heavily armed and armored VWs could have posed a serious problem. As it was the spot on accuracy of the mortar teams caused the crews to make like a tree..and get the hell out of there.

The Club Route is established at last.

The 505th may not have been aware of the decision made in  Feldt's HQ but they can see the results. Feldt has decided to commit just enough troops to the area around Groesbeek to keep the 508th occupied  and out of the true battle which will happen in and around Nijmegen proper. To that end he has begun to send the majority of his reinforcements to the city.

Colonel Ekman and his troopers aren't wasting time on gentlemanly ranged fire. He knows that if he wants to dislodge the Germans defending the town before they become so numerous as to make the job impossible that his men are going to have to get up close and personal. They must make repeated assaults as they drive towards the river. It's going to be a dirty nasty business.

This they do. Their superior morale, training, and drive give them the edge over the hastily assembled German units. Units of the 504th lend a hand as well. Their success comes with a price in casualties. Street to street and block to block fighting is never easy.

As darkness falls they have made some progress but are still not in control of the bridge. Feldt, for his part, tries to be a bit sneaky and under the cover of night has attempted to loop what few armored units he has around the left flank of the 505th and deploy them on the open ground between the city and the bridges at Neerbosch.

The Americans get wind of this and push their anti-tank units that way. When dawn breaks they will have to get into position and engage those tanks.

By 0900 the fog that was a concern to the Airborne units has cleared, thank God. The drop will be coming.

The units of Tettau get close to interdicting the landing zones before the second drop can arrive but fall just short. The landing goes off without a hitch and the new paratroopers are on their feet and in motion in short order.

A few Red Devils remain behind to slow them up but they will soon be overwhelmed but the sheer weight of numbers. The following drops are slated to land farther East and so the loss of the original ones is not considered tragic.

In a hasty conference, it is decided to refocus their efforts on the Arnhem Rail Bridge. Pulling back from Arnhem proper they hope to get across the bridge and establish a defensive perimeter on both sides of the Rhine before the enemy realizes what is happening and can bring forces to bear. A few independent units of the Frundsberg division redeploy to confront the threat but they themselves come under fire from the AT guns of the British.

This bridge, like the one over the Haas-Waal Canal, must be reinforced before it can be used for vehicle traffic. The engineers will have to earn their pay because it will have to be done in daylight and most likely under fire.

The Germans, recovering from the initial shock of the landings, are starting to get their act together. Reinforcements are flooding into Arnhem. So many, in fact, that there is a certain amount of traffic congestion. This confusion delays but does not stop them from getting some heavy artillery over the river and deployed by night fall. Those guns will be dealing out punishment in large quantities soon.

The morning of the 19th comes accompanied by a steady rain that shows no sign of clearing. The 3rd paradrop has been delayed and won't be coming until tomorrow. This is unwelcome news for the Red Devil's as they have taken heavy casualties and need reinforcement desperately. However, it will hamper the ability of the Germans to re-deploy and it will make fighting defensively a bit easier.